Meaning of Family in Beloved by Toni Morrison

Family means everything to many of the characters in our novel. Both biological and chosen familial relationships are incredibly important to the characters and create both a source of happiness and deep sorrow. Family can be seen as something that creates strength, that builds a community and fosters a sense of confidence and belonging. At the same time, a familial bond can be abused and used to hurt someone. Watching one’s family suffer often hurts more than your own suffering, and our characters show this in so many ways.

Don't use plagiarized sources. Get your custom essay on
“ Meaning of Family in Beloved by Toni Morrison ”
Get custom paper
NEW! smart matching with writer

The clearest way in which we see family hurt someone is when Halle has to silently watch the beating and violation of his wife Sethe. When the schoolteacher’s nephews attack his wife Halle completely loses it. He is frozen in horror and afterward loses his mind. This trauma that he did not physically experience, emotionally and mentally ruined him. When he is later found, he’s covered in butter clearly insane.

Proficient in: Beloved By Toni Morrison

Not only did this attack brutalize Sethe, but her loved one as well.

One of the more important symbols in the novel is the symbolism behind naming people. A character such as Sethe’s first daughter, is given no name throughout the reading other than Beloved, symbolizing the fact that she has been all but erased in the mind of Sethe. A character like Schoolteacher, however, is given an unhuman name, he becomes so much less than a person, just a job. This radiates with his cruel unforgiving nature and brutality, he is not seen as a person who can feel or empathize, just as a man set out to violently do his job.

Another such example of the importance of a name comes from the character of Denver. Denver was named after Amy, the young white woman that found Sethe, broken, pregnant, and needy, and nursed her back to health. To reconnect this naming to the importance of family, Denver was named after someone who was seen as a guardian angel, a positive force in her mother’s life and that is exactly what Denver becomes. Denver is precious to her mother and represents goodness in her life both in her coming to be after Sethe escapes brutality and in her being Amy’s namesake.

Finally, the relationship between Denver and her unnamed sister’s ghost is one I believe is incredibly powerful. The bond of these two sisters surpasses the physical living world and connects them between worlds and planes. A living girl and a ghost have arguably the most important relationship in this whole book. The undying and pure love Denver feels for her sister causes her great joy, yet when Paul D drives the ghost away, it causes Denver to feel terribly alone. When the spirit of her sister is thought to come back, however, this time in the form of Beloved, both Denver and Sethe develop an attachment like no other. Although Beloved begins to mistreat Sethe and leech off of her, she is unable to see that she is being hurt by this relationship because her love for her daughter and her guilt about killing her was blinding. Towards the end, even though Denver knows that Beloved and consequently, her sister, are no more than a parasite failing to let her and her mother move on with their lives, she still dies loving Beloved with her whole soul, for seemingly no reason other than their familial bond.

Meaning of Family in Beloved by Toni Morrison. (2021, Dec 02). Retrieved from https://studymoose.com/meaning-of-family-in-beloved-by-toni-morrison-essay 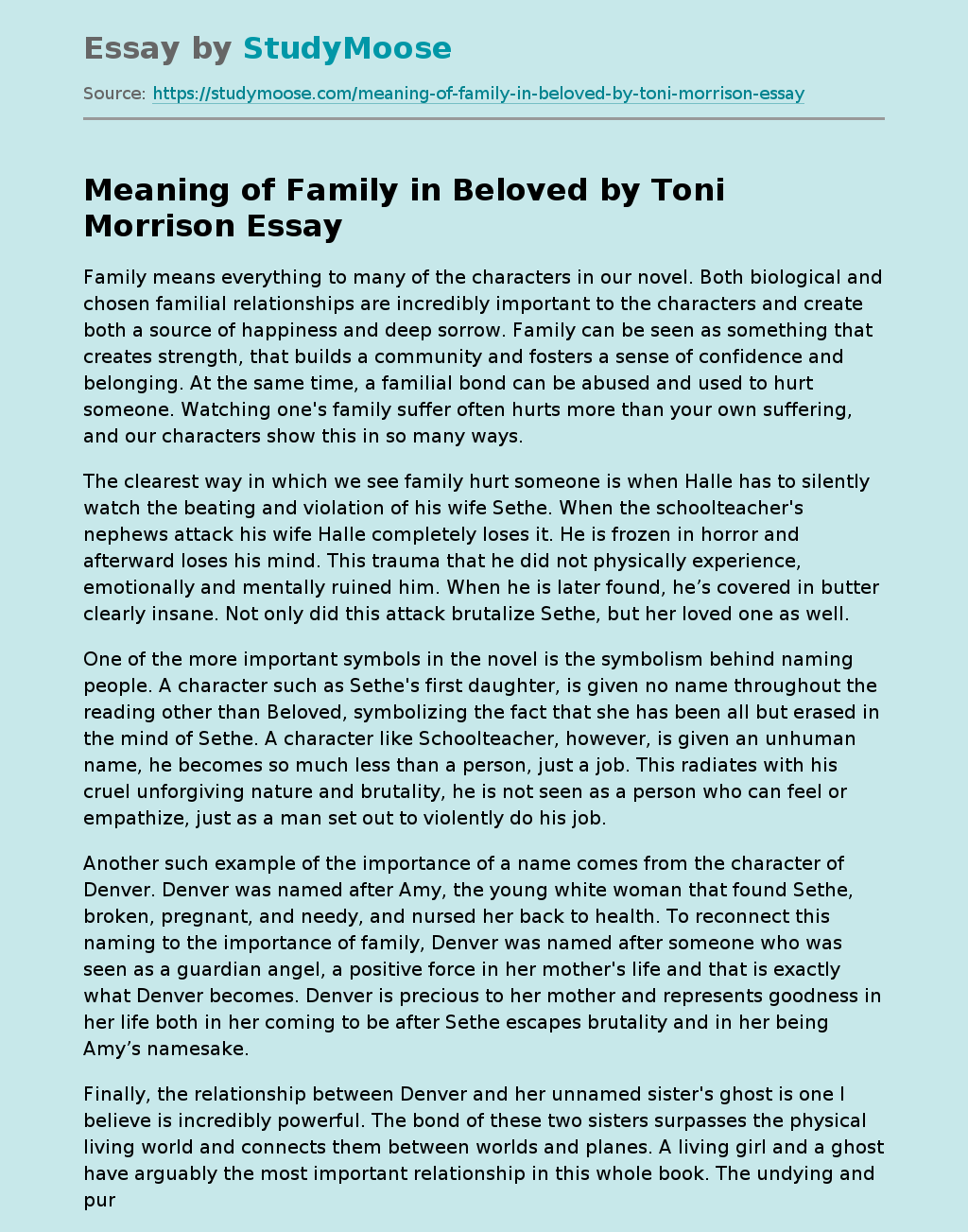