"Oedipus Rex" and what lead to his downfall

“Oedipus Rex” “There is no man blessed amongst us. All the works of man are known and every soul is tried,” sings the chorus at the beginning of Oedipus Rex. After answering the riddle of man, Oedipus becomes the foremost of living men and takes his turn on the top of the wheel. Oedipus believes, “it is better to rule over man than over a wasted place; since, a walled township is nothing if it is empty and has no man within it.

Don't use plagiarized sources. Get your custom essay on
“ “Oedipus Rex” and what lead to his downfall ”
Get custom paper
NEW! smart matching with writer

” But, what he does not realize is that very soon he will have fallen to the bottom. Oedipus believes three people are out to get him: Tiresias, Creon, and Jocasta.

Believing he is blessed, Oedipus does not listen to the words of those close to him. In doing so, he will be forced to learn of his unimagined shame. Bearing his burden to the end, Laius’ murderer will eventually see the truth.

Oedipus delivers a proclamation to pursue the truth. Tiresias, the blind prophet, comes to convict Oedipus: “I charge you to obey the decree that you yourself have made. You are the differ of this land.” He tells of the plague not leaving until the murderer is found. Tiresias, being a great prophet, knows all but will not tell: “I will speak no further. Rage if you have a mind to.” Only after Oedipus persists does the prophet say Oedipus is the murderer: “I say that you are the murderer that you seek.

” Tiresias further states that Oedipus is married to his mother: “You are living with your next of kin in unimagined shame.” Oedipus, unwilling to turn the mirror on himself, resorts to insulting Tiresias: “Was it Creon that planned this or you yourself…the riddle about man is about himself.” A man’s fate is his character; at this moment Oedipus has no character. Oedipus presumes there is a conspiracy plotted against him. His arrogance and rashness is very apparent in his believing that everyone is wrong except he (is not).

Being so bold, Oedipus calls Creon to his dwelling: “You are my enemy…do you believe I am stupid?” asks Oedipus Rex. Oedipus, believing that Creon and Tiresias are consulting to double-cross him, asks about Creon’s reasoning. Creon appeals to his best friend: “I have all the power and none of the responsibilities. Everyone loves me, so why should I give up those things? I don’t contrive plots It is a bad a thing to cast off a true best friend as it is to kill a man.” Oedipus in all his rashness retorts: “Then let him go, though I am bound there by death. His nature is his biggest burden.” After having hearing where the murder took place, Oedipus recalls for the first time those highways. This happened just before his arrival. Oedipus speaks to a messenger to inquire as to the murderer’s appearance. The messenger returns with a slave who witnessed the whole incident. For the first time Oedipus is inquiring into the death of Laius. Nobility will come only after the truth is sought.

A time after Oedipus arrived in Corinth, a slave asked to be sent to another town; after seeing Oedipus, he knew he was the one who killed Laius: “When he found you reigning instead of Laius he besought me…to send him to the fields among the cattle that he might be far away from the sight of this town.” Oedipus, then, tells his wife, Jocasta, about his visit to the Oracle and how he was destine to kill his father and marry his mother: “I went to Delphi…Phoebus told me that I should live in incest with my mother and…that I should be my father’s murderer.” Attempting to cheat the gods, Oedipus sought escape from those encumbrance. As he was wandering, Oedipus came upon Laius. Meeting them on a road and becoming entangled in an altercation, Oedipus slaughtered many men. But, he puts off all doubts until he talks to the slave. With all these events taking place on the same day, Oedipus learns that his presumed father has died from old age: “Hurry to your master with this news…This is the man who Oedipus feared and shunned lest he should murder him, and now this man has dies a natural death, and not by the hand of Oedipus.

Unwilling to rest, Oedipus learns that his believed mother is not his mother at all, but she had simply taken him in after someone had abandon him as a baby. Jocasta implores her husband to give up the search: “Yet, hear me, I implore you. Give up the search.” However, Oedipus, showing nobility, maintains his pursuit toward the truth: “Let come what will…why should I renounce this search into my birth?”

Finally, Oedipus learns the entire truth: he had married his mother, killed his father, and had learned his birth parents are Laius and Jocasta. She, now, knows the truth proved feeble. Only after seeking the truth does Oedipus become noble. For the first time he does not blame anyone but himself. The worst misfortune is the one he brings upon himself. The minute Oedipus made someone feel less, he became less. After observing his dead wife, Oedipus, receiving strength from Apollo, gauges out his eyes. Oedipus goes through suffering and becomes more heroic. For the first time he becomes concerned about his children and the life they will now lead because of what he has done. Lies smell of mortality; Oedipus’ works are now know and every soul is tried.

"Oedipus Rex" and what lead to his downfall. (2020, Jun 02). Retrieved from https://studymoose.com/oedipus-rex-lead-downfall-new-essay 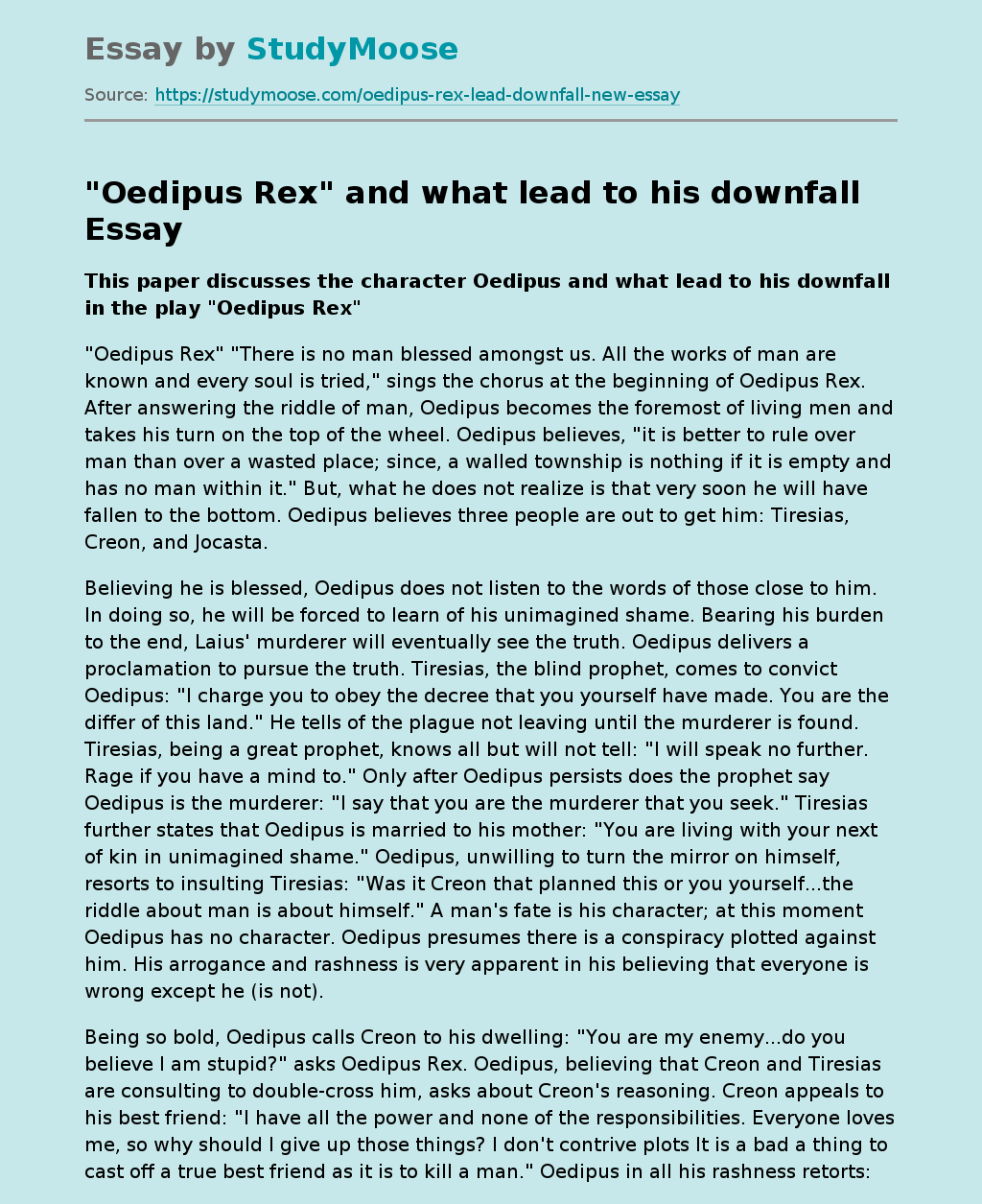