We as human beings want to believe that we live in a safe, stable and orderly world where good things happen to good people and bad things only happen to bad people. That’s why we have sayings such as “what goes around comes around”, “everyone gets what they deserve”, or “karma is a b**ch”. But do people really get what they deserve? Unfortunately no, not in real life. However, in the novel Silas Marner by George Eliot, many of the characters do actually deserve what falls upon them.

Don't use plagiarized sources. Get your custom essay on
“ Novel Silas Marner by George Eliot – Karma is Real ”
Get custom paper
NEW! smart matching with writer

Godfrey Cass, Dunstan Cass and Silas Marner himself are perfect examples of this, for all of them have “gotten what they deserved”.

Though Godfrey came from a good family, he still made many poor choices. He married a woman named Molly Farren who had an opium addiction, and had a child, Eppie, with her. Fearing that his actions would put a significant dent in his reputation, Godfrey keeps his wife and child a secret from his father and the village.

When Molly died of an overdose, Godfrey continued to selfishly think of himself and feared that she was not dead. “Godfrey felt a great throb: there was one terror in his mind at that moment: it was, that the woman might not be dead. That was an evil terror an ugly inmate to have found a nestling-place in Godfrey’s kindly disposition; but no disposition is a security from evil wishes to a man whose happiness hangs on duplicity.” (Chapter 13, page ).

This implies that he was weak and unable to think of much beyond his immediate material comfort. Godfrey is quick to move on from this and begins a new relationship with a women named Nancy Lammeter. Godfrey’s life with her sets him on a better path, but he continues to care for and take ownership of Eppie. In the end, he only tells the truth because he is afraid it will be found out anyway. His own desires still are the most important thing to him. As he begins to regret his poor choices regarding Eppie, he wants to get custody of her and thinks he has a “right” to his daughter, even though he tossed her aside for his own needs in the beginning. However, Eppie has grown up with Silas and doesn’t want to leave him. “we’ve been used to be happy together every day, and I can’t think o’ no happiness without him. And he says he’d nobody in the world till I was sent to him, and he’d have nothing when I was gone. And he’s took care of me and loved me from the first, and I’ll cleave to him as long as he lives, and nobody shall ever come between him and me” (Chapter 19, page 206) Godfrey neglected his child to save his reputation, and when he realized that was wrong, he couldn’t have her back. Therefore, Godfrey got what he deserved.

Dunstan Cass, being Godfrey’s brother, also came from a good family. However, some may say that Godfrey is just weak, but Dunstan is completely bad. He is greedy, selfish and dishonest. Like Godfrey, he is only interested in what will benefit himself. He convinces his brother to giving him money, which he spends on alcohol and gambling. He sells Godfrey’s horse, but later kills the horse. Unfazed, he walks home and passes by Silas Marner’s cottage. Having knowledge of his wealth, Dunstan is overwhelmed with greed and decides to rob him. “If the weaver was dead, who had a right to his money? Who would know where his money was hidden? Who would know that anybody had come to take it away? He [Dunstan] went no farther into the subtleties of evidence: the pressing question, “Where is the money?” now took such entire possession of him as to make him quite forget that the weaver’s death was not a certainty. A dull mind, once arriving at an inference that flatters a desire, is rarely able to retain the impression that the notion from which the inference started was purely problematic. And Dunstan’s mind was as dull as the mind of a possible felon usually is.” He successfully robs Silas, but years later, Dunstan’s body along with the gold, is found at the bottom of the stone pit. Dunstan refused to put his own greed aside to save his life. Therefore, Dunstan got what he deserved. 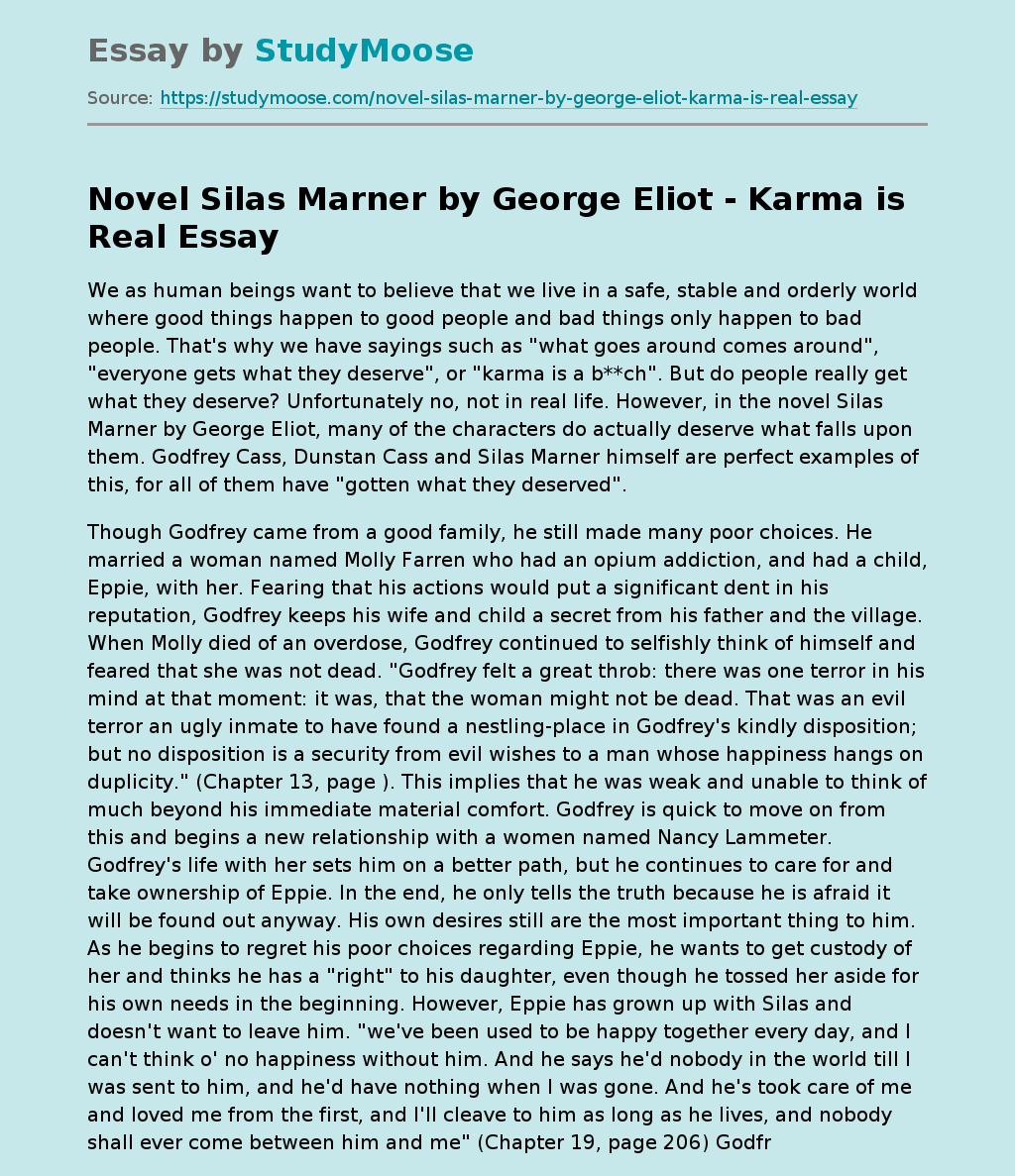