Silas Marner: A Paradigm of Structural Development of Human Relationship and Its Impact on Human Existence

Development of Relationships in Silas MarnerThe overstated structural phenomena practically resolve whether the relationships get developed or collapsed down. A comprehensive scrutiny has been accomplished on the subsequent development of some significant characters’ relationships in Silas Marner on the basis of the said phenomena. The analysis is as follows:In Lantern Yard, Silas Marner and William Dane were two bosom friends. The relationship of this friendship is consecrated with all kinds of recognitions. They had responsibilities and trust upon which Silas let William have access to his personal and private life, that is, Silas got accompanied with William when he resolved to meet Sarah, Silas’ beloved.

Don't use plagiarized sources. Get your custom essay on
“ Silas Marner: A Paradigm of Structural Development of Human Relationship and Its Impact on Human Existence ”
Get custom paper
NEW! smart matching with writer

All these phenomena smoothly geared their friendship up. But the villainous inclusion of William as the third person in between Silas and Sarah and the extra-affair (like extra-marital) relationship between William and Sarah proved a great disloyalty as a good friend. Later, William tremendously contravened his responsibilities and trust by making Silas falsely accused of theft and by marrying Sarah.

Ultimately their relationship tumbled down forever.Silas Marner and Sarah are lover and beloved in the novel Silas Marner. Actually this kind of man-woman relationship takes place only by conforming to the inducement of mind and immoral indulgence of illusion and infatuation. This is why, it happens having no familial, social and religious recognitions. Nevertheless, it is a wide spread relationship which also requires responsibilities, trust and tolerance for its successful development and ultimate maturity. With such facts, Silas’ and Sarah’s affair got a full swing, it was about to attain a final stage of being united through their marriage fixation.

Silas Marner: A Paradigm of Structural Development of Human Relationship and Its Impact on Human Existence. (2019, Aug 20). Retrieved from https://studymoose.com/silas-marner-a-paradigm-of-structural-development-of-human-relationship-and-its-impact-on-human-existence-essay 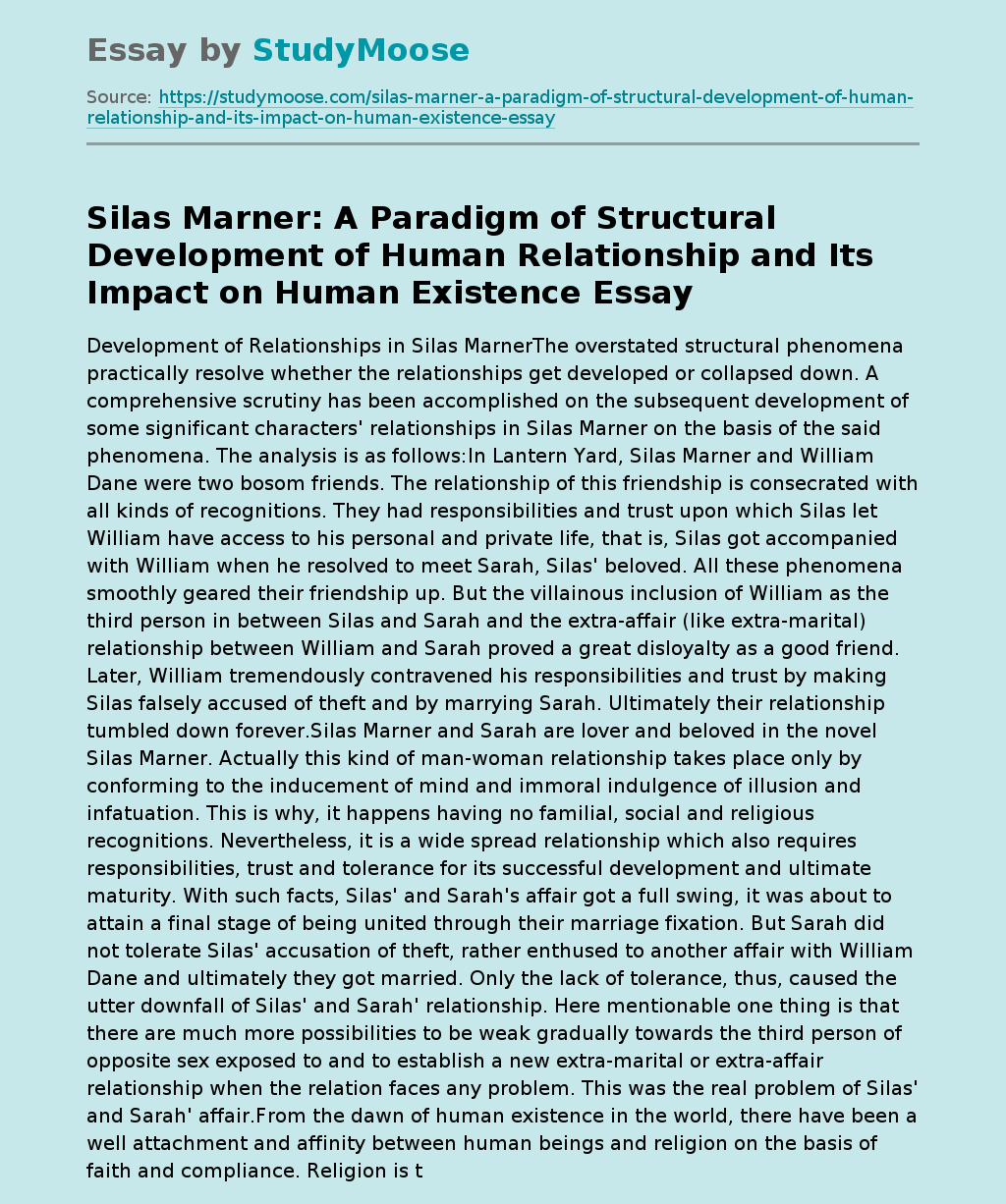