“Notes of a Native Son” by James Baldwin

The point of Baldwin’s essays is not so much to make his readers aware of racial prejudice in the States as it is to attempt to look at that prejudice, analyze it, understand where it comes from, and decide how to deal with it. In this essay, James Baldwin explores the complexities of both race relationships and familial relationships. Concerning his relationship with his father, Baldwin admits toward the beginning of the essay: “We had got on badly, partly because we shared, in our different fashions, the vice of stubborn pride.

Don't use plagiarized sources. Get your custom essay on
“ “Notes of a Native Son” by James Baldwin ”
Get custom paper
NEW! smart matching with writer

” This admission sets the tone for the rest of the essay, an idea of both opposition and similarity in this relationship. Also, Baldwin begins the title essay in Notes of a Native Son with a statement of death and birth. He mentions that “my father died. On the same day, a few hours later, his last child was born.”(p,52) This theme of death and birth also works itself out on a larger scale, eventually encompassing the entire essay.

At the end of the essay Baldwin begins with his father’s funeral. Then he goes into reminiscing the times when his father was alive, realizing that they hadn’t talked much. Then back to the funeral, “The casket now was opened and the mourners were being led up the aisle to look for the last time on the deceased.” (p.65) Baldwin takes a last look at his father’s face.Baldwin is able to see his father in a different light, one that includes both his negative and positive characteristics.

In doing so, Baldwin is also able to see himself more clearly. By examining his relationship with his father, Baldwin experiences several revelations, which culminate in a type of symbolic death and spiritual rebirth by the end of the essay.

“Notes of a Native Son” by James Baldwin. (2016, Apr 09). Retrieved from https://studymoose.com/notes-of-a-native-son-by-james-baldwin-essay 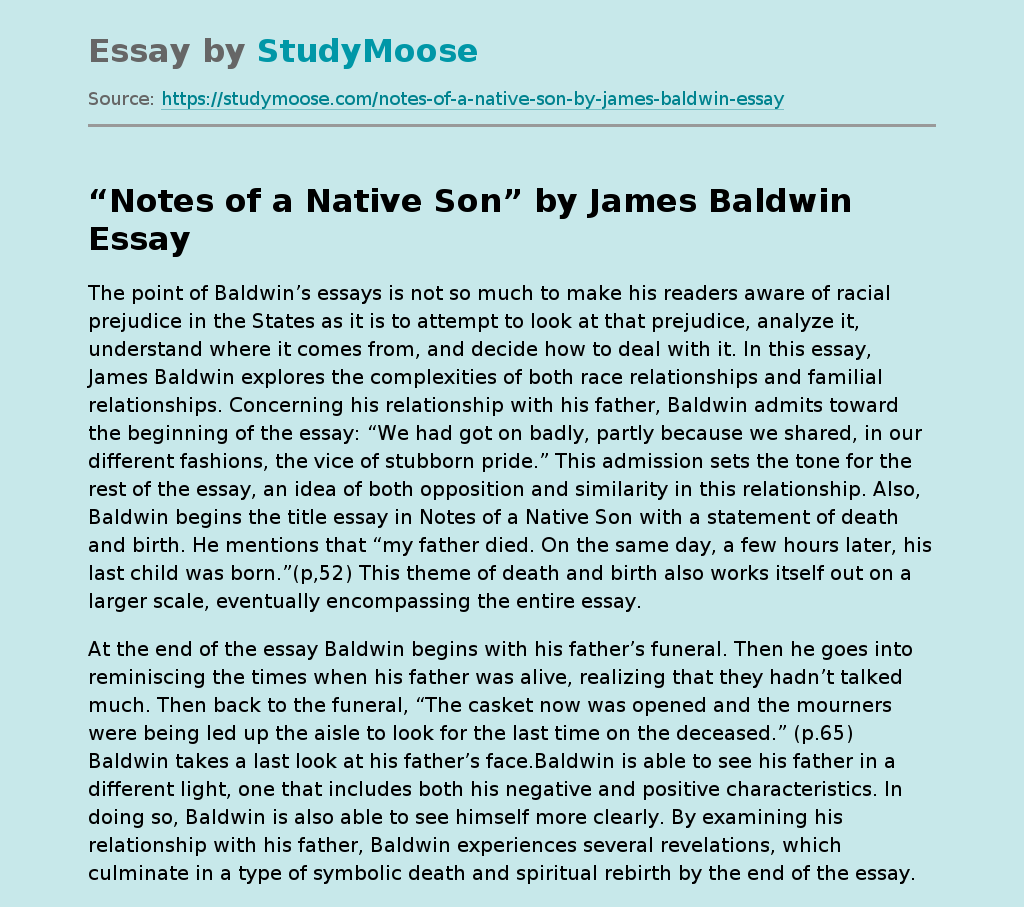