“Night demonstrates the potential of man’s inhumanity to man”

Elie Weisels “night “ gives us a clear insight into the levels of inhumane behaviour which existed in the times of Nazi Germany from the Germans and even the Jews themselves. Elie also makes clear the great malice shown by some people, during a time where discrimination was a trend created by German propaganda – a situation which made any act of inhumanity acceptable. Nonetheless Night also shows us the way in which people are willing to sacrifice, purely for the survival of others.

Don't use plagiarized sources. Get your custom essay on
“ “Night demonstrates the potential of man’s inhumanity to man” ”
Get custom paper
NEW! smart matching with writer

“Night” also demonstrates the nature of the human qualities by showing that even in the most inhuman and cruel circumstances, we can survive something like “hell on earth” Concentration camps showed us inhumanity on a scale previously unimagined.

However the setting in place of such inhumane behaviour began some years before with the systematic dehumanising of the Jews by breaking down social structures and relationships and taking away their place in civil society. The novel shows that there is great inhumanity displayed from this personal journey of Elie Wiesel.

The Jews were tortured every day for no reason at all other than for the SS officers’ own amusement. The SS officers treated the men as if they were animals, making them fight for food. Women, babies, old, sick, and handicapped were put into the crematoriums as soon as they arrived at the camps. The Germans stripped the Jews to nothing and took away everything close to them, separation from loved ones, isolation, transportation and the ruthless, cold actions towards them in the camps such as starvation and selections of the fittest.

They killed people for no reason, with no remorse whatsoever.

Tortures, being treated like animals, and being burned alive or killed were all things that led to the Jews feeling as if they were not human. As the treatment of the Jews gets worse, so do their own actions. After their time at Birkenau, the prisoners were in very bad shape. All were starving, but some more than others. At this point, one of the young men kills his own father for his ration of bread and is then promptly surrounded and killed by some of the more disgusted Jews who had seen the crime. While the justice administered by the other Jews is a sign of humanity hanging by a thread in the minds and hearts of the prisoners, the young man who killed his own father signifies as much of a tendency in the opposite direction. While some would argue that the goal of survival could possibly justify the means, the effect the Nazis are having on the minds of the Jews cannot be ignored. Despite the relenting bleakness and horror of life in the camps, Elie Weisel survives with his emotional insanity and survival remarkably intact. The critical things that helped people to survive in to camps included human connections, such as friendships and family relationships, hearing and making music and random acts of kindness from strangers.

By doing whatever he needed to so he could survive, Wiesel’s identity had truly changed in the concentration camps. Elie survived the concentration camps for nearly two years. Even though he often claims that he wanted to give up, that he wished he would die, he still fought against death. He writes “our first act as free men was to throw ourselves onto the provisions. We thought only of that. Not of revenge, not of our families. Nothing but bread.” This quote shows that, though Elie has lost his identity so much that he is almost like a wild animal, he has still managed to keep the instinct to survive. This endurance showed that he never was able to fully give up on life. He somehow pushed past the Nazi cruelty to live through malnutrition, torture, and sorrow. Even as his emotions shut down to the point where he could not cry for his dead father, he was shutting down so he could survive the experience of the death camps.

“Night demonstrates the potential of man’s inhumanity to man”. (2016, Mar 06). Retrieved from https://studymoose.com/night-demonstrates-the-potential-of-mans-inhumanity-to-man-essay 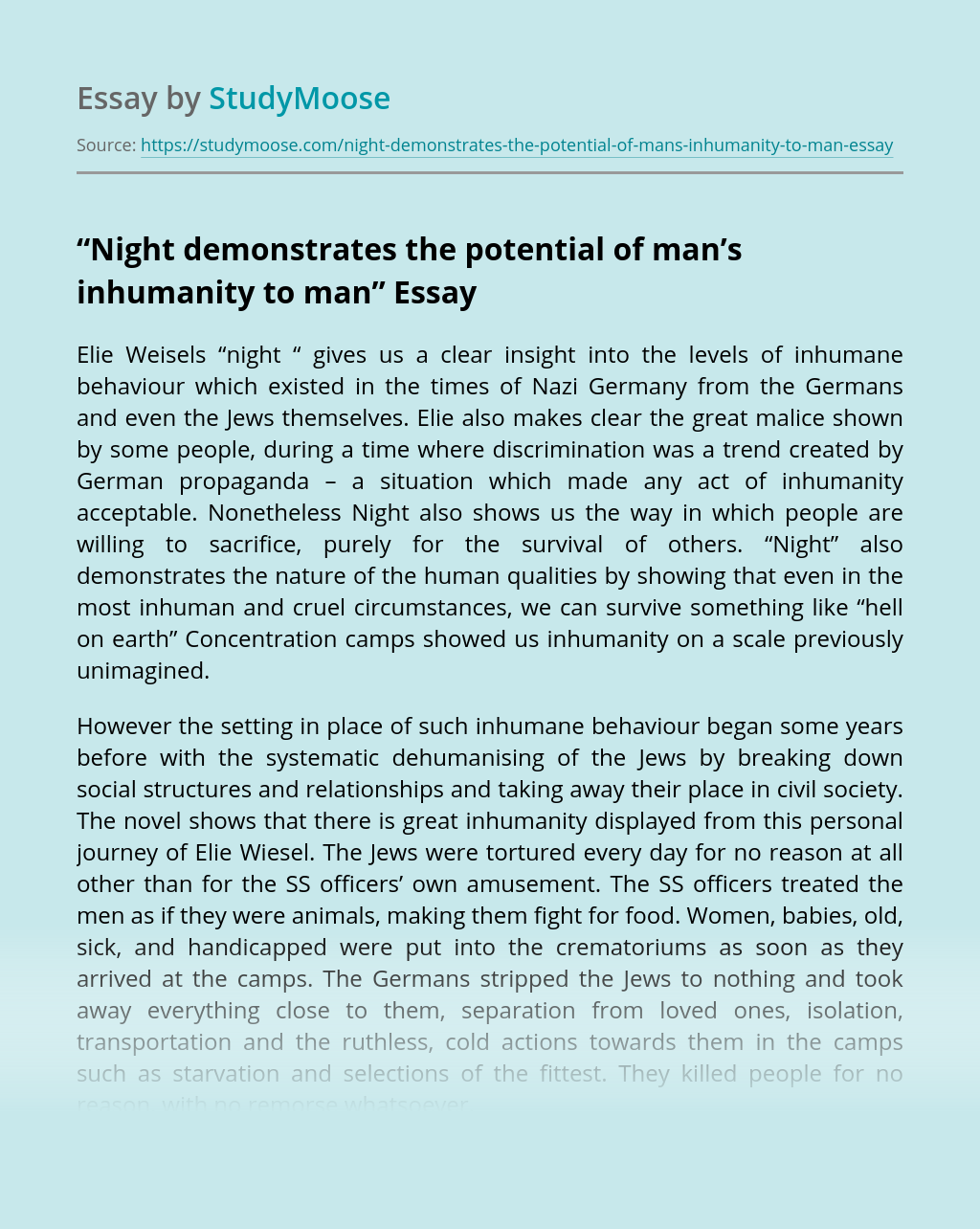