COL FELIPE B BEJAR JR MNSA RC #47 My Personality Profile I am 47 years old and born on January 05. I am happily married with two children both living on their own with their respective husbands. My ambition since child was to become a teacher which was influenced by my high regards to my mentors looking at them as having so much knowledge and wisdom to impart to their students. The childhood ambition was derailed due to financial considerations when I was a freshman with my three other siblings also in college.

Don't use plagiarized sources. Get your custom essay on
“ My Personality Profile ”
Get custom paper
NEW! smart matching with writer

I had to consider a course that would free my parents from the burden of not only the tuition fees but all the expenses for a decent and promising career. My acceptance to the Philippine Military Academy in 1981 made my parents the proudest in the community. A lot have been dreaming of entering the premier military school but only a few are given the opportunity and privilege. Besides, it has been the wishes of my late father to have one of his three sons to be in the military service as he could never forget his adventures with the Japanese forces as a child.

Proficient in: My Personality Profile

Upon graduation from PMA, another sort of luck came when I was given a scholarship to yet another premier school, the University of the Philippines, which I took up BS Civil Engineering course and eventually passed the board examinations. This chartered my career in the military. I’m now with the Philippine Army Corps of Engineers which I recently handled the salient position as Chief of Staff of the 53rd Engineer Brigade.

This was preceded by a three years stint in PMA and being an engineer battalion commander for two years in northern Luzon.

ENNEAGRAM As a requirement for acceptance at the National Defence College of the Philippines for the Master of National Security Administration course, I undertook a series of tests which classified my Emotional Quotient to be that of an “Achiever” or the “#3” type under the ENNEAGRAM Profiling method. As an Achiever, I am described to be energetic, optimistic, self-assured, and goal oriented. The description somehow fits me. I’m into various sports therefore athletic and energetic. As an athlete, it developed in me to be lways with a positive outlook in life. As an optimistic person and athletic, I always feel very confident in most of my undertakings. Also being a military man, I am mission oriented and accomplishment is always a priority. At “The Dinner Party” situation, an Achiever usually thinks of finishing his meal ahead and would leave as he feels “swamped” by a big crowd for the dinner with different personalities. I found this description to be applying to myself on most dinner occasions I attend.

I tend to be uncomfortable being with so many different personalities on a dining table and often I want to extricate myself. The “Arrows” diagram says that when I’m relaxed, I tend to assume the positive qualities of a #6 or a “Questioner” person such as responsible, trustworthy and one who values loyalty to family, friends, groups and causes. Also the diagram showed that when I am under stress, I tend to become the #9 or the “Peacemaker” with the negative qualities such as spaced-out, forgetful, stubborn, obsessive, apathetic, passive-aggressive, judgmental and unassertive.

Under the “Wings” theory, my personality as an Achiever may blend into or be influenced by the “Helper” or #2 type of person and the “Romantics” or #4 type of person. This also proved my preference to be with people with these types. For the “Three Centers” diagram, an Achiever likes the Heart or Feeling Center image. This is consistent with my desire to be always seen in good light, according to socially agree-upon norms. This situation boosts my confidence and makes me comfortable in front of people.

The Enneagram further shows that as an Achiever, I am motivated by the need to be productive, achieve success, and avoid failure. At my best, I am optimistic, confident, industrious, efficient, self-propelled, energetic and practical. However, at my worst situation, I am deceptive, narcissistic, pretentious, vain, superficial, vindictive and overly competitive. For the Adaptive and Maladaptive Cognitive Style diagram, an Achiever’s objective paradigm is Hope while the distorting paradigm is Efficiency.

On the other hand, using Adaptive and Maladaptive Emotional Schema diagram, an Achiever’s virtue is Truthfulness while his passion is Deceit. Using the “Paradigm Shifts” diagram, an Achiever when successful tends to shift paradigm to feeling settled and further becoming a wise person. However, when experiencing failures, an Achiever tends to be in a conflict situation and further become deviant. In the “Our Father” diagram, an Achiever has the phrase description of “Thy kingdom” with a shift to either “Amen, Our Father” or “And forgive us our trespasses as we forgive who trespass against us. MILLON CLINICAL MULTIAXIAL INVENTORY III (MCMI III) Under the MCMI III Profiling method, my personality falls under the Compulsive type. Accordingly, I am a person with characteristic of a pattern of preoccupation with orderliness, perfectionism and control. Above characteristics fits my self-perception of not having the peace of my mind whenever simple things like my room arrangement are not in accordance to my taste. In most of my activities especially competitions like sports, I tend to always do it without any flaws and I feel comfortable being in control of the situation.

Further, this profiling method describes my expressive acts as Disciplined, my interpersonal acts as Respectful, cognitive style as Constricted, and regulatory mechanisms as Reaction Formation. On the other hand, under structural attributes, my self-image is Conscientious, object representation as Concealed, morphologic organization as Compartmentalized and mood or temperament as Solemn. Having a compulsive personality disorder, MCMI III also describes me as a hard working and a person with conscience.

It also says that I always want to do things right and a persevering person. Also, I’m a person who is thrifty, careful and cautious in all areas of my life. This profiling method almost perfectly described me as a conscientious person who saves and collects things, reluctant to discard anything that has, formerly had, or someday may have value for me. MBTI Profile This profiling method classifies my characteristics as ESTJ or Extravert, Sensing, Thinking and Judging.

Accordingly, I’m a person with breadth of interest, strong reliance on facts, using logic and analysis on situations and someone who believes in organizations. This is reflected on the Myrers Briggs chart. As an extravert person, I have the preference for the outer world of people, events, activity and things. I focus on past or present experience through the senses. On being a thinking person, I use logic to make decisions on laws and principles or logical analysis.

I prefer, being a judging person, to be planned and organized in the outer world and seeking closure. Being an ESTJ, under the Prayers a la Myers, I pray “God, help me not to try to run everything. But if you need some help, just ask! ” Also, as an ESTJ my five most important values are home or family, health, financial security, achievements and friendships. Leadership Based on the leadership opinion questionnaire, it is highly likely for me to define and structure my own role and those of my subordinates toward goal attainment.

I always give emphasis on thorough planning, communicating information, scheduling, criticizing, and trying out new ideas. On considerations, it reflected that I have a little low regard for job relationships characterized by mutual trust, respect for subordinate’s ideas, consideration of their feelings, and certain warmth between supervisor and subordinates. In general, I consider the above four character profiling methods somehow accurate and consistent with my self-evaluation or self-assessment.

I also realized and observed that most of my characteristics are consistent from an earlier age to the present. However, I also feel that through the years, a few characteristics especially on the personality disorders have evolved and somehow developed to a better character. is I consider this as normal as it goes with the aging or maturity process. Also, character adjustments may also be induced by the changing environment of personal situations like having bigger responsibilities in life coupled with the will to change as part of self-realization. 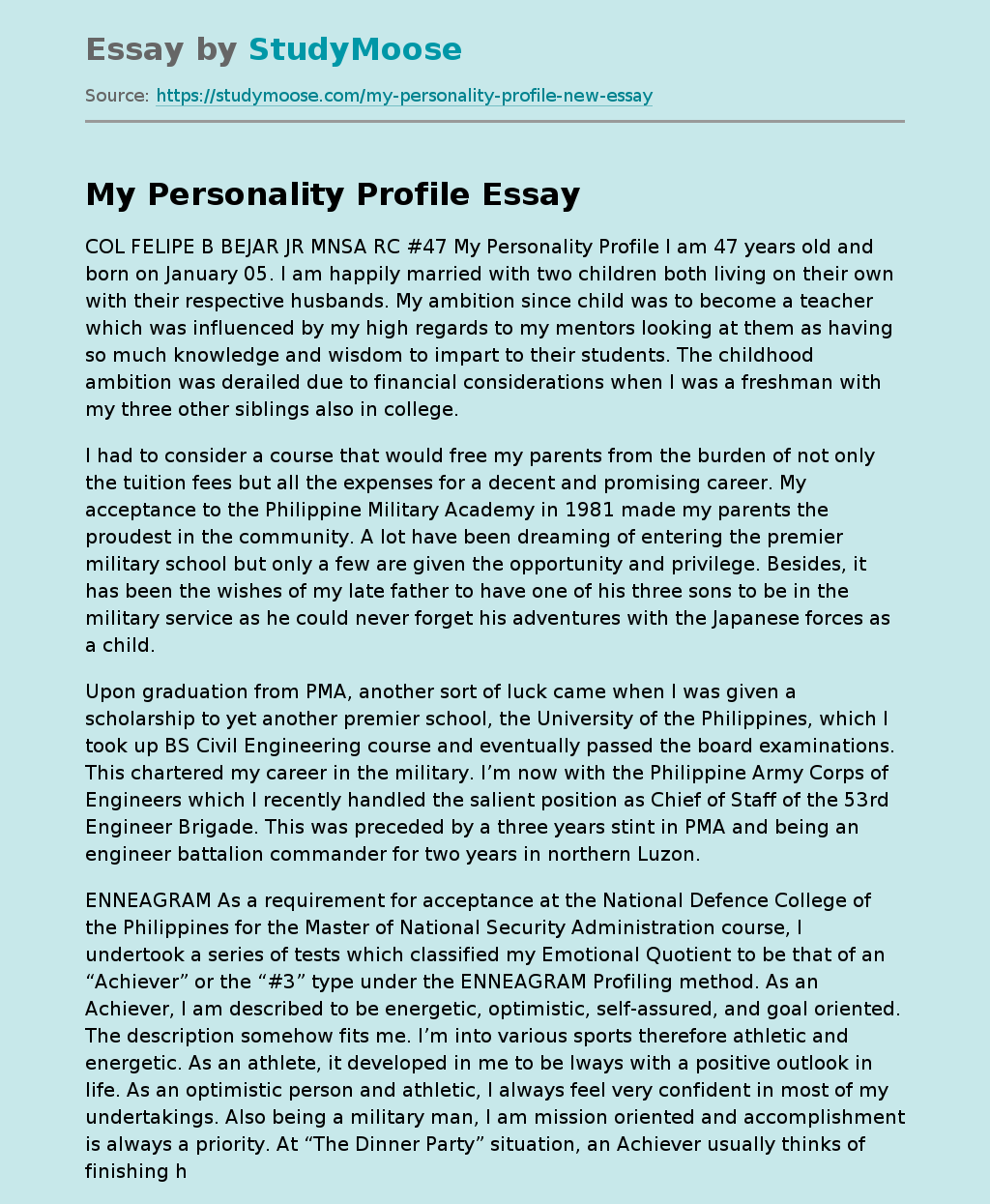