One of the main influences that shapes people’s traits is culture. Culture can be seen as unwritten rules of how we do particular things different from one human group to another and therefore culture separates groups of people (Geert Hofstede). This applies to all kind of groups, such as national, but also organizational. In this assignment I will investigate to what extent the results of my personal cultural profile match the profile of my domestic culture (Dutch) using the 5 dimensions model (Hofstede, Hofstede and Minkov, 2010).

Next to that I will discuss if the results of my cultural profile present me well, according to my opinion. After graduating, I would like to work in Spain, for a Spanish company, therefore I will also be using this assignment to investigate how my cultural profile matches the Spanish one. Characterizations of organizations are reflected in organizational processes, thus culture can also be seen in organizational processes. This is important for when I start working as a manager in Spain, because a different culture causes different policies and procedures, systems, planning and control, communication and decision-making processes (Schneider and Barsoux, 2003).

The 5 dimensions will help me to find these differences between my own culture and the Spanish culture.

When a business is operating in one than more country, the fundamental management tasks, such as planning and organizing, are the same for each country. However, managers will experience much more difficulties when performing management on an international scale, due to differences in the economic, political and sociocultural environment between countries (Daft, Kendrick and Vershinina, 2010).

Concerning the sociocultural environment, each nation has different “shared knowledge, beliefs, values, as well as the common modes of behaviour and ways of thinking among members of a society” (Daft et al., 2010, p. 137). A manager deals with people and in order to be successful internationally, a manager should realize that people come with a different background, provided by their culture (Hofstede, 1994).

Many definitions of culture have appeared, however one of the most used definitions is the one developed by the cross-cultural expert, Geert Hofstede, who defines it as “the collective programming of the mind which distinguishes the members of one category of people from another” (Hofstede, 1994, p. 1). To get a handle on local cultures a manager has to understand the differences in social values. This can be done by using the five dimensions of national value systems that influence organizational and employee working relationships (Daft et al., 2012).

Power distance “indicates the extent to which a society accepts the unequal distribution of power in institutions and organizations” (Schneider and Barsoux, 2003, p. 87). According to my cultural profile I score relatively high on this dimension (see figure 1), which would mean that I prefer to work in organizations where there are many levels of hierarchy and a high proportion of supervisory personnel and where the process of decision-making is centralized. Also a good relationship with my supervisor would be very important and I’m sfraid to express any disagreement with him. This is not in line with the Dutch culture, because the power distance is a lot lower in Dutch organizations and although the Spanish culture has a higher score on this dimension, it is still a lot lower than the score of my cultural profile (see figure 2).

Spanish organizations are hierarchical and there is more respect for each other than in Dutch ones, for example, critique about ones manager is not tolerated and you don’t start a discussion with your manager. So when working there as a manager I should be conscious of the fact that my employees don’t provide me with negative feedback and search for little signals in order to discover the real problems. In my opinion my real score on this dimension is more average, because although I appreciate a good relationship with my supervisor and I don’t find it very important that he involves me in every decision, I’m not afraid to share my complaints or disagreements with him and I would like to work in an environment where is not a lot of hierarchy, but a wider span of control and equal rights.

Individualism “reflects the extent to which people prefer to take care of themselves and their immediate families, remaining emotionally independent from groups, organizations and other collectivities” (Schneider and Barsoux, 2003, p. 87). The results of my cultural profile show that I’m very individualistic (see figure 1). This would mean that I prefer individual decision making as a manager and that I should work in an organization were individual initiative and effort are more appreciated than consensus and cooperation. Also are sufficient time for my personal life and variety and adventure in my job very important. Finally, there is not much attention for good physical working conditions and employee security. The results of my cultural profile match very well with the Dutch culture, which is indeed very individualistic. Looking at Spain, it has an average score.(see figure 2). So in a Spanish organization teamwork is also not considered as something totally natural, but people are in fact more worried about losing face . Also they are very loyal to their family and their personal lives and work are more mixed with each other than in individualistic cultures, so the key to a good business relationship, is a good personal relationship.

I think the results of my cultural profile on this dimension represents me well, because I agree upon almost all the previous features that describe an individualistic culture. However I do think that there should be enough attention for good physical working conditions. Uncertainty avoidance “refers to a society’s discomfort with uncertainty, preferring predictability and stability” (Schneider and Barsoux, 2003, p. 87). Based on the results of my cultural profile, it can be stated that I score relatively low on this dimension (see figure 1). This would mean that I like to work in an organization where there is a low level of formalization evident in a small amount of written rules and procedures and that rules can be broken when it is in the interest of the firm, also there would not be a lot of specialization in defining functions and jobs and competition between colleagues is seen as a good thing. As a manager I would not avoid taking any risks.

The score according to my cultural profile is quite similar to the one of the Dutch profile, however Spain scores higher on the uncertainty dimension (see figure 2). Spanish people like to have rules for everything and changes cause stress, but, at the same time, they avoid rules and laws that make life more complex. Confrontation is avoided as it causes great stress and scales up to the personal level very quickly (Geert-Hofstede/Spain). F or me as a manager this is important to know, because I’m used to working in situations where rules, changes and confrontations are not avoided just because they cause stress. In my opinion the score of my cultural profile represents me well on this dimension, because the characteristics of a low uncertainty avoidance describe me well.

Masculinity/femininity” reveals the bias towards either ‘masculine’ values of assertiveness, competitiveness, and materialism, or towards ‘feminine’ values of nurturing, and the quality of life and relationships” (Schneider and Barsoux, 2003, p. 87). My score is very low (see figure 1), which means that I would be feminine, so I’m very concerned with nurturing social relationships and my role as a manager to safeguard employee well-being and to demonstrate concern for social responsibility. However, a change for advancement and promotion would not be so important. Just as me, the Dutch culture is also very feminine, but the Spanish culture is a little bit more masculine (see figure 2). I think that I’m indeed very feminine, because I appreciate a good social relationship with others and as a manager I would be concerned about my employees well-being. However, I find an opportunity for achievement and advancement in my job also important.

Long term/short term orientation is “The extent to which a society exhibits a pragmatic future-oriented perspective rather than a conventional historic or short-term point of view” (De Mooij, 2010, p. 85). According to my results I have an average score on this dimension, just as the Dutch culture. Spain scores quite low on this dimension, thus is short-term oriented. Spanish people like to live in the moment, without a great concern about the future and people look for quick results without delays. Moreover, there is a need for clear structures and well defined rules to make life more relaxed, particularly, in the long term time

According to Hofstede et al. (2010), an entire nations culture can be described by measuring five dimensions with only 18 questions. I think this amount of questions is quite low, and I wonder if they really capture each aspect of every dimension. Also, because the original data is already 40 years old, you might think that with the technical innovations and international trade, and therefore the globalization, different cultures have influenced one another and cultural integration has taken places.

It might be that the core of any national culture is not so static after all, with the result that national cultures are more and more being mixed, which will maybe eventually create a ‘global culture’. If this would be the case, the original data about all the national cultures will not representative anymore. However, after answering the 18 questions the results showed many resemblanches between my cultural profile and the cultural profile of my home country, so Hofstede’s work is in fact very valuable. Also I think it is a good thing that Hofstede everytime tries to improve and expand his work, by adding new dimensions, using new findings.

Comparing the scores of my cultural profile and the Dutch profile, it can be concluded that these two cultural profiles match very well. Allthough my score on the power distance dimension is a lot higher than the score of the Dutch cultural on the same dimension, the scores of the remaining four dimensions are quite similar. Thus it has appeared that my domestic culture has indeed a lot of influence on my personal culture, when using Hofstede’s 5 dimensions.

It also showed that there are a many cultural differences between my culture and the Spanish culture, because it’s more collectivistic, there is a higher uncertainty avoidance, it’s more masculine and it’s more short-term orientated. When combining the dimensions a lot about the Spanish procedures, systems, communication and decision-making processes can be stated , which is very usefull for when I start working for a company in Spain, because there are a lot of things which they do differently than what I’m used to, so it will be really hard for me and it will probably take a while for me to settle down as a manager and to adjust to their procedures and to get used to them. However, I still see it as a nice opportunity and challenge to eventually start working in Spain, because I’ll learn a lot from it and it will improve my cultural intellegence. 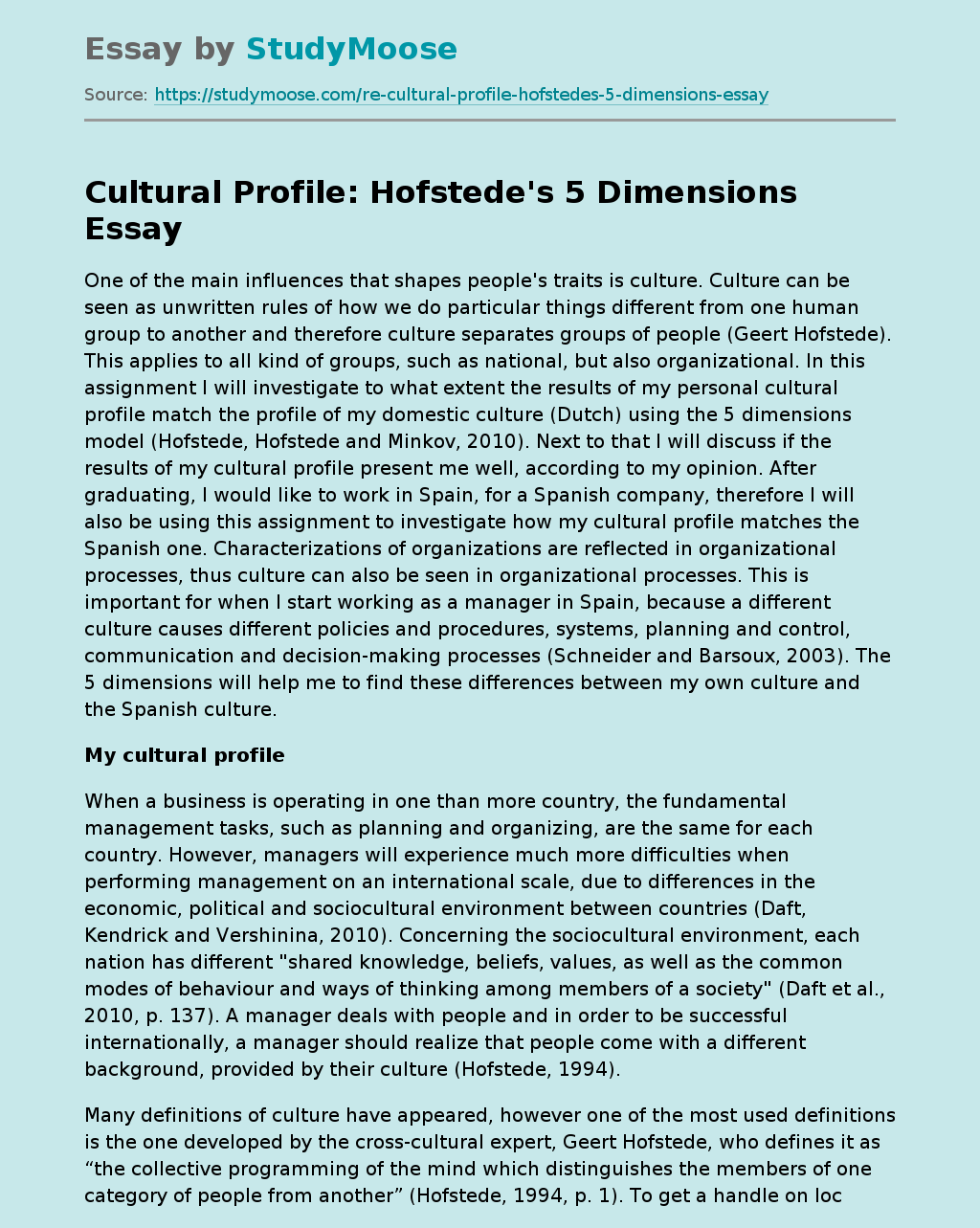