Geert Hofstede is a social psycologist, originally from the Netherlands. Hofstede is well known globally for his revolutionary research of multicultural organisations and groups. Perhaps his most important work was developing the theory of cultural dimensions. There are 5 dimensions that Hofstede explains in his framework- these are; Power distance index (PDI), Individualism versus Collectivism (IDV), Masculinity versus Femininity (MAS), Uncertainty Avoidance Index (UAI), and Long term Orientation versus Short term normative orientation (LTO). Power distance index is the dimension in which a society can understand and accept inequalities that occur in their culture.

Don't use plagiarized sources. Get your custom essay on
“ Geert Hofstede on Cultural Dimensions in Society ”
Get custom paper
NEW! smart matching with writer

It is all about the less dominant members of that culture understanding that imbalances politically, financially and racially for example, occur in their world- and the key issue Hofstede focuses on is how these disparities are handles. For a country to yield a large degree of PDI, then the people must recognise that these inequalities will occur and accept a hierarchical order.

Therefore societies with a low PDI, make every effort to rid of the differences in status or importance and strive to level the distribution of, for example, wealth or power.

The example that Hofstede recently gave to illustrate the impact of PDI is the reaction of Chinese authorities to the fact that a Chinese author won the Nobel Prize for peace, explaining that he is a man that the western part of the world would only perceive as a good, virtuous winner of the prize. Due to the authorities reaction he describes them as feeling threatened by the possible share of power, therefore being a place of high PDI.

The second dimension that Hofstede describes is Individualism. This can be explained as a preference of a society that only believes they need to look after themselves and their immediate family. The flipside of this, which Hofstede refers to as Collectivism, represents a preference for a tightly-knit framework in society in which individuals can expect their relatives or members of a particular in-group to look after them in exchange for unquestioning loyalty. A society’s position on this dimension is reflected in whether people’s self-image is defined in terms of “I” or “we.” The next aspect of his framework is the Masculinity versus Femininity factor.

The masculinity feature is where society in whole is very competitive. It is about achievement, success, and prevailing more than others and gaining material rewards for success. The opposite of this that is illustrated is femininity, which is a society which is more focused on cooperating, caring for the weak and the general concern for quality of life. In the business context Masculinity versus Femininity is sometimes also related to as “tough versus gender” cultures. The fourth point that Hofstede portrays in his work is Uncertainty avoidance index. This is explained as being the degree to which the members of a society feel uncomfortable with doubt and ambiguity. Hofstede explains the key issue here is how a society can deal with or accept the uncertainty of the future and how it cannot be known- it is a question of whether society attempts to control what will happen in the future or just simply let it happen.

A country with a low uncertainty avoidance index is the latter; the part of society with more of a laid back and relaxed approach to how the future develops, whereas a country with strong UAI has firm beliefs on codes of conduct and behaviour, in order to be able to influence the future as much as possible. The final dimension that Hofstede uses is the Long term orientation versus short term normative orientation. Societies who score low on this dimension, for example, prefer to maintain time-honoured traditions and norms while viewing societal change with suspicion. Those with a culture which scores high, on the other hand, take a more pragmatic approach: they encourage thrift and efforts in modern education as a way to prepare for the future.

To conclude this exploration of Geert Hofstede’s framework, I believe that all of the points he makes and focuses on are relevant in societies internationally, regardless of specific cultures. For example, the Power Distance index dimension is an issue that occurs all over the globe. There are individuals in every society that have superior power to others, be it financially, politically or just have a greater status in the social order. However the acceptance of these issues can vary from country to country. For example, I would say that North Korea have a very high PDI, as they are governed by a dictatorship where certain individuals have enormous power over the rest of society, and they just get along with it and accept that fact. However in more democratic states; i.e. the UK and the USA the PDI is much lower as society believes much more in equality. 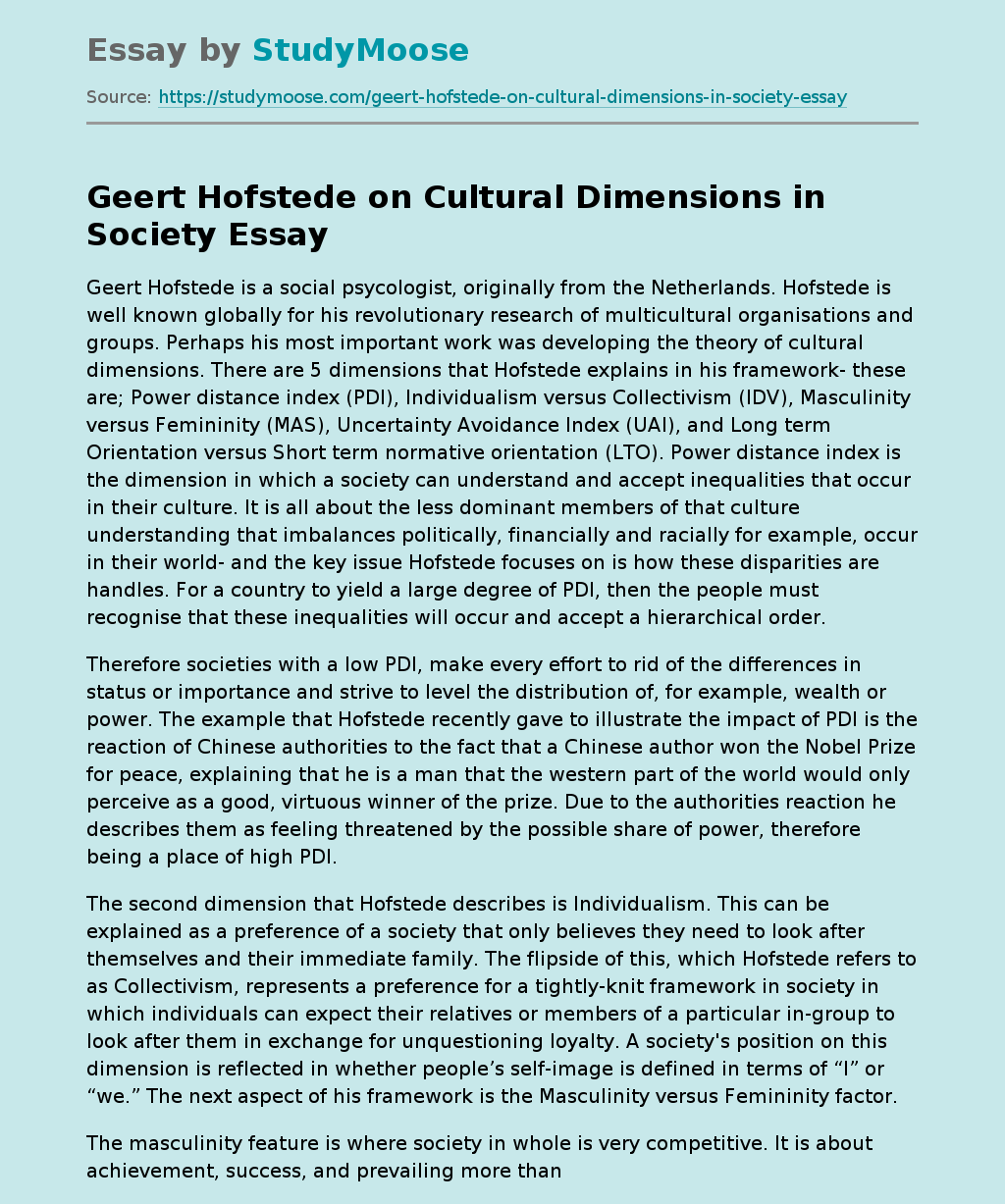