To Kill a Mockingbird Monologue on Tom Robinson

I sure does hope Atticus does this man justice

See I just wanted to do the same of what my neighbours be doing, they all be involved so I thought I had to be there or I won’t be helping out the county

No man does deserve to be lynched

Tom Robinson be out livin his life and we is trying bring him down.

Don't use plagiarized sources. Get your custom essay on
“ To Kill a Mockingbird Monologue on Tom Robinson ”
Get custom paper
NEW! smart matching with writer

We ain’t no worse than them Ewells

Dem Ewells only think bout themselves and do whatever they want

Nothing, No one darn thing

That girl don’t deserve no help from us or anybody, her family be what’s wrong with this county not dem blacks

“Sigh” but no one does listen to the black man, no one, not one person

Why we always gotta take the white word as right?

That man ain’t got no damn chance

That’s all dreams for now though, just dreams

This darn depression be screwing us all over some people ain’t even got nothing and we hardly got something at all but we be living our lives.

Oh how i want the days back of tending the crops, selling em down at the market then getting a nice ham for the whole family to eat. We ain’t got that no more. No one got no money to buy our crops and our crops can even grow cause this drought oh we got it tough.

My family be mighty poor and it’s pretty hard to feed my family some days but i can’t think what dem blacks be going through. They can’t be happy hardly having enough food for even one child and being hated on by us whites

No wonder i thought Tom should be lynched I was trying to follow what everyone else is doing, I want to fit in, be accepted again *big exhale* and have my wife back.

My wife would have wanted me to be nice to everybody , She was a good lady and I hope she be looking down from up there and be happy with me, that’s all I ever wanted her to be the happiest gal on earth but now all I hope is that she can be happiest gal in heaven

All we got outta this depression is no money, death and a hatred of the blacks

From this day ain’t no Cunningham gonna disrespect a black man ever again, they do be people just like us

To Kill a Mockingbird Monologue on Tom Robinson. (2019, Nov 29). Retrieved from https://studymoose.com/my-monologue-will-be-on-the-afterthoughts-of-walter-cunningham-example-essay?post 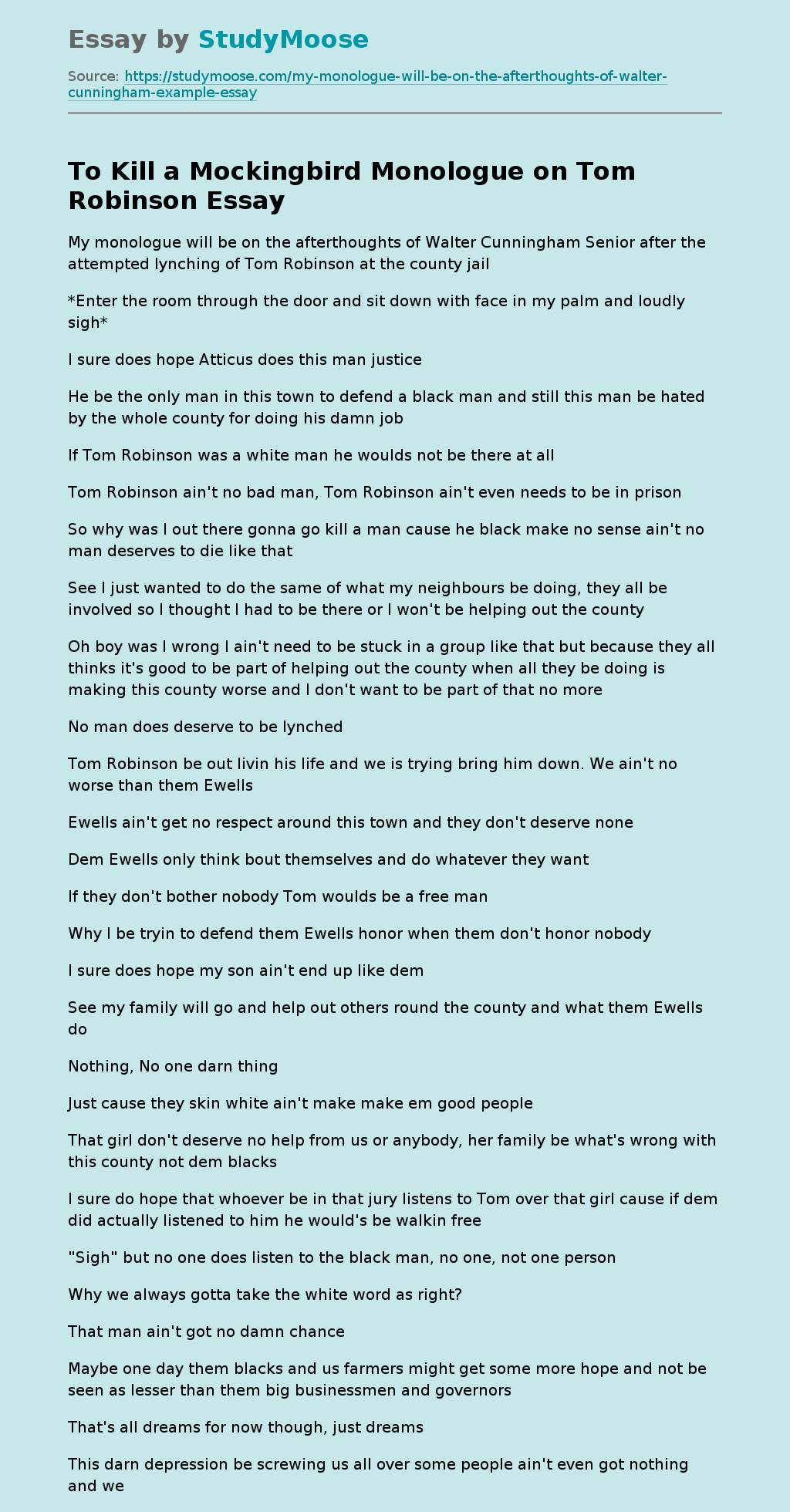