Nowadays a lot of people think that the more people have TV or Internet in their homes, the fewer people will buy books. It’s often thought why to read long novels, when a play on TV can tell you the same story with colours, pictures and actions. But I’m certain, that books are still popular, becouse it’s a cheaper way, than to go to the cinema and also you can keep a book forever and read it many time.

Get a verified writer to help you with My favourite book

My favourite book is written by Erich Maria Remarque (1898-1970), German-American novelist, born in Osnabruck, Germany, and educated at the University of Munster. He served in the German army during World War I. During the war he wrote his first novel ” All Quite on the Western Front”, it became an internalional bestseller. I’ve read a lot of novels by Remarque, but most of all I like “A time to live and a time to die” published in 1954.

This novel is about Soldier Ernst Greaber, who is doing military service at the Russian front . One day he gets a short holiday homeward. Once arrived in his native town he learns about the despairs and dissapointment the war has spread over the country. The town is bombed down, parents, friends and relatives are vanished. On the desperate search for his missing parents he meets a former companion of his youth Elisabeth. They marry , but unfortunately Ernst must leave his native town and departure back to the front.

Just arriving in Russia Ernst is involved into the midst of a conflict. When he gets a lift and has an opportunity to leave the war, he refuses…,becouse the his troops are losing. At this point Ernst perish.

The main character Ernst Greaber is a sensitive, just and loyal person. From his point of view this degrading situation in his native town is much harder to him than the fight taking place at the far away Russian front. Graeber partly sees himself responsible for the ” horror”, but cannot find a way out of this devastating outcome of the war. Elizabeth is a pretty young woman, but inhibited by fear and worry of war.

From my point of view I believe that Remarque showed the serious conflict between extreme idealism and humanity clearly and with a sensible feeling. He described the heroical fighter as a person with feelings. On the other hand, he described the victims of the war, Germans the same as Bolschewists precisely and showed the controversies in the arguments of the National Socialism. To my mind, I think this book is one of the greatest pieces of war literature because it sdoesn’t give just an objective scenery is given but also questions are delivered which encourage to give some thought. 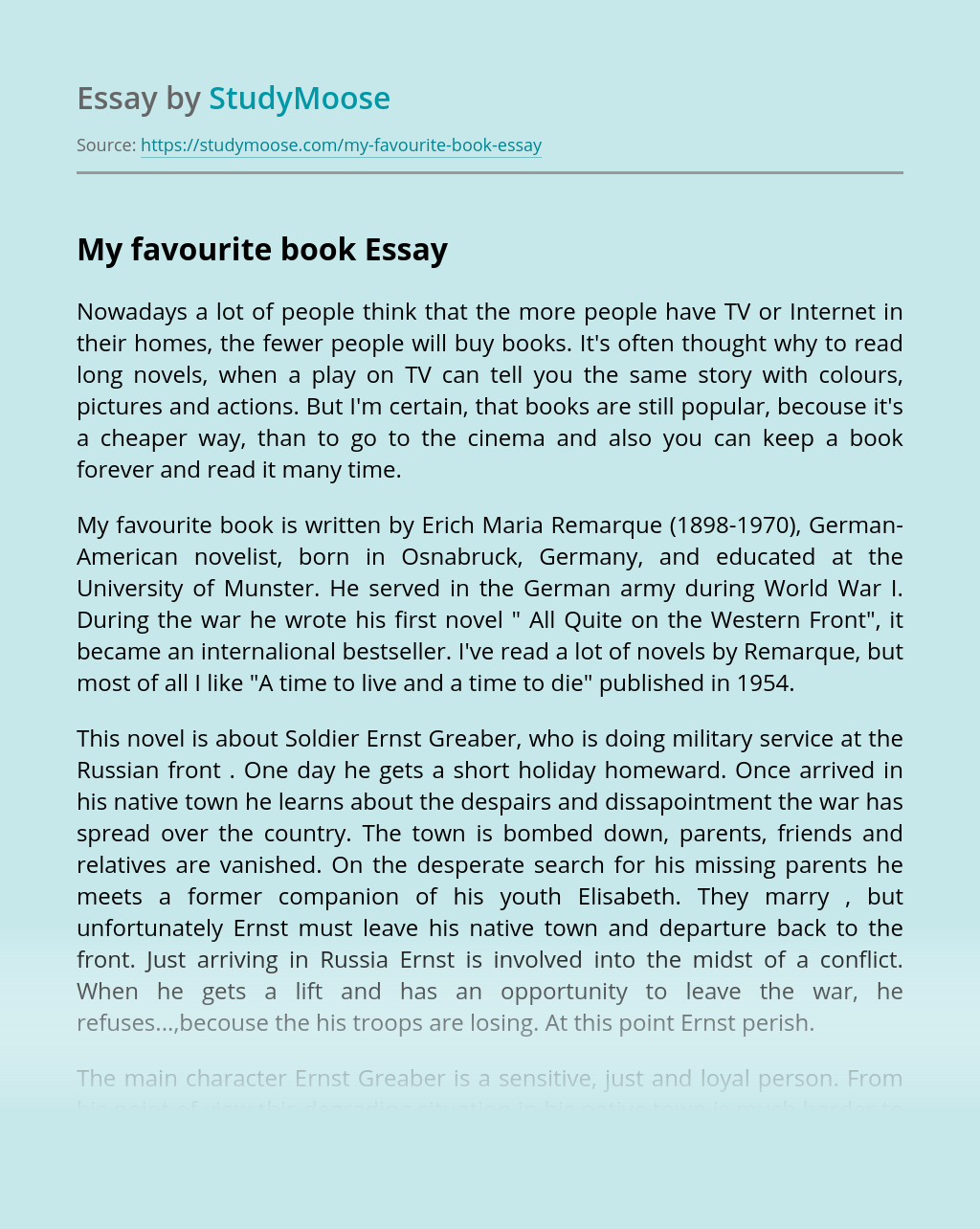 The League of Nations: Strengths and Weaknesses

5 / 5 ( 2 votes ) Some may argue that the League of Nations was a success while other would say it was a total failure, but, failure or not, the concept was far ahead of its time. But nonetheless, the organisation had various flaws that contributed to its downfall. The League was created...

Get Essay
Which factors led to Germany's defeat in the World War I?

5 / 5 ( 2 votes ) The World War I was the first global war which happened in Europe in 1914 to 1918. In this war, Germany and Austria-Hungary were defeated by Great Britain, France and the United States because of several reasons. The factors which led to the defeat of Germany were poor...

How was civilian life affected by WW1?

5 / 5 ( 2 votes ) The First World War greatly changed the lives of civilians living in Britain. When the war first broke out, there was a tremendous feel of euphoria and patriotism. In the first four weeks after the declaration of war, over 500 000 men had enlisted in the army. This...

5 / 5 ( 2 votes ) What is a Compare and Contrast Essay? The primary aim of the compare and contrast essay is to select two issues, from the same category, to conduct a research of their similarities and divergences. The subjects for comparison can be versatile – historical events, famous personalities, philosophical ideas,...

5 / 5 ( 2 votes ) Maheen Khan Extended Essay I. Introduction and information on Utopias Turmoil within an author’s society can implant the idea of a utopia in their minds. Utopian societies are considered to be a perfect world. Two prevalent novels centered around this type of society are Brave New World by...

The Major Themes of Virginia Woolf's novel “To the Lighthouse”

5 / 5 ( 2 votes ) Gillian Beer believes Woolf tries to “hold within a single work …the experience of family life and culture, before and after the First World War” and that Woolf does so by separating the two worlds (Hume). Instead of being more explicit and political in ‘Time Passes,” Woolf transcends...