‘…all(Dicken’s characters), no matter how briefly sketched are real.(CLIFFS NOTES P.54).Charles Dickens has the ability to make his characters very close to human, if not human. Charles Dickens’ novel, Great Expectations, is mainly based on a character named Pip who goes from ‘rags’ to ‘riches’. Joe Gargery, Pip’s brother-in-law, lives with Pip and Mrs. Joe in the marsh country. He is a blacksmith who doesn’t make a lot of money but manages to stay a mild and good-natured man.

Don't use plagiarized sources.
Get Your Custom Essay on Joe Gargery’s Character Analysis Just from $13,9/Page

But what causes Joe to stay so mild and good-natured throughout Pip’s transformation? The truth can only be revealed through studying his relationship to Pip, his importance to the plot, and the theme he best represents.

When Pip’s parents die, his sister decides to bring him up ‘by the hand'(p.559). She has a very hard time with Pip, and in the future says, ‘I’d never do it[bring Pip up] again!'(p.

560). Then she marries Joe Gargery. Joe and Pip form this ‘everlasting’ relationship, mainly because they were both ‘brought up by the hand'(p.559). Joe always looks out for Pip and helps Pip out. Mrs. Joe would never do this. For example, when Pip was coming back from the graveyard after his first encounter with the convict, he find out that Mrs. Joe had gone on a rampage with the tickler only by Joe telling him. When Mrs. Joe returns, she throws Pip at Joe and Joe guards Pip from any harm Mrs. Joe can do.

Though these incidents, Joe develops a steady, everlasting relationship with Pip. When Pip receives word of his expectation, he also found out that in order to get his expectation and become a gentleman, he must go to London. Pip’s reason for wanting to become a gentleman is mainly for Estella. He will do anything to impress Estella and win her heart. Pip knew he had to go if he were ever going to win Estella’s heart. Joe had built up such a strong relationship with Pip that he didn’t want anything to do with the obstruction of Pip’s future. Another reason for Joe loving Pip is when Pip was sick and in debt, Joe went to London and helped Pip. Joe paid his debts(even though he himself had money problems) and stayed at Pip’s bedside every second he was sick. According to Joe, ”…you and me was ever friends.”

(p.706) Joe must love Pip more than anything in the world if he flew to London just to help an ‘old friend’. Pip’s relationship to Joe wasn’t quite as ‘smooth’ as Joe’s relationship to Pip. At the beginning of the novel, Pip and Joe had an equal relationship, the both cared and helped each other. Joe, for example, let Pip know of Mrs. Joe’s rampage and Pip taught Joe to read. So they both had an equal relationship at the beginning. But when Pip received word of his expectation, things changed. Pip only concentrates on being a gentleman and winning over Estella.

Pip doesn’t think about Joe much anymore. When Joe went to visit Pip, and Joe kept trying to put his hat on the corner of the chimney piece without realizing it is too big, Pip becomes very annoyed with him. ‘I felt impatient of him and out of temper with him.'(p.631) If things were like home, Pip would teach Joe, not be annoyed at him. But Joe, being this mild and good-natured man, blames the whole incident on himself. The relationships between Pip and Joe are very different throughout the novel.

Without Joe in the novel, Pip wouldn’t have ever received his great expectation. Joe is the ‘man of the house’. Joe provides the family with money. This money gives them a place to stay, food, and clothing. When Pip met the first convict, he demanded a file and wittles. Where would Pip get these items if Joe were not there to provide the money, which provided the food, shelter, and clothing? Pip would not be able to provide his convict with the file and wittles and the other convict would take Pip’s heart and lungs out. Then, there would be nobody to give the expectation to and there would also be no reason to give the expectation. The main reason for the convict giving the expectation was the last person who did something good for him. But Pip never gives the wittles and file to the convict so there was no last good thing done. So, without Joe, there would be no expectation.

Overall, Joe’s relationship to Pip gets an A+ because his thoughts of Pip stayed steady throughout the novel no matter what Pip did to Joe. Pip’s relationship to Joe gets a C because at the beginning he felt the same way about Joe but his expectation changed his feelings about Joe. Nothing should be able to break up a strong relationship. Joe’s importance to the plot received an A because the plot would not be able to continue without Joe. Joe’s representation to the theme received an A because Joe was the one who didn’t care about sophisticated manners, but only genuine kindness and affection. ‘…There has been no writer of fiction in the western world who had Dicken’s genius for creating such an infinite variety of characters.'(CLIFFS NOTES p.54) Charles Dickens has created Joe as an amazing character in the novel, Great Expectations. 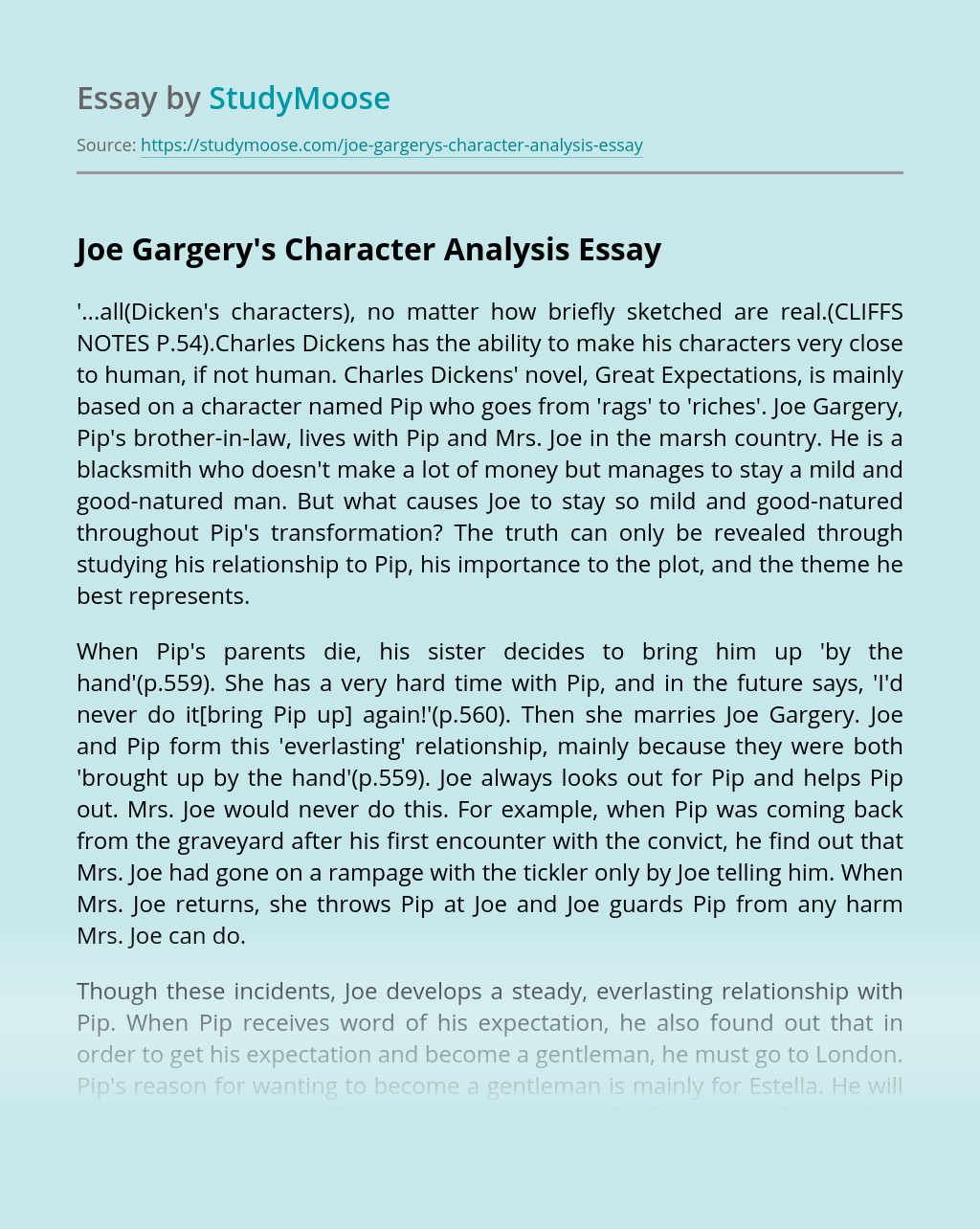 Vacation at My Home Town - Ahmedabad

Ahmedabad, the city of Ahmed Shah (Medieval ruler of Gujarat), is known for its rich past and its association with the Mahatma (Great Soul) Gandhi. The city offers a unique style of architecture, which is a blend of Hindu and Islamic styles (Indo-Saracenic style of architecture). The monuments of Ahmedabad mainly date back to the...

‘Growing Up’ The Instant noodles market in India is finally coming of age after over 25 years The instant noodles category in India was, in a sense, created by Nestlé with the introduction of their Maggi brand in mid-1980s. The concept of ‘2-minute noodles’, positioned as a quick snack option for children, found acceptance with...

I am excited to apply for the position of Sport Captain and Sport-Spirit Prefect. A key attribute of these positions is representation; the act of speaking and acting on behalf of someone. I feel that to adequately represent something, you have to have a good understanding of it. Firstly, a Sport Captain/Prefect represents the school....

Introduction             Computers are everywhere and the processors for personal computers these days are more powerful. In the last decade, we have witnessed the advancement of computer in the areas of movies and entertainment, multimedia arts, science and technology, business and industries, health, sports, and education. Humans have created the very useful and powerful machines...