Mrs. Henry Lafayette Dubose in To Kill a Mockingbird

Mrs. Henry Lafayette Dubose is brought forth as a wearing old-fashioned woman when the reader first gets an idea of her and her actions. However, as the novel proceeds the reader begins to peel her layers and learn that though she may have a fiery attitude, Mrs. Dubose is fighting and suffering to be a burden to nobody but is still, in the essence of her intolerance, keeping a hold on to white tradition. Turning the reader’s viewpoint of Mrs.

Don't use plagiarized sources. Get your custom essay on
“ Mrs. Henry Lafayette Dubose in To Kill a Mockingbird ”
Get custom paper
NEW! smart matching with writer

Dubose from a heartless, old, bashing racist to a courageous fighter, one can say getting to know Mrs. Dubose is like a jawbreaker, layered.

Scout finds Mrs. Dubose’s appearance as vile as her view on Mrs.Dubose. “Cords of saliva would collect on her lips; she would draw them in, then open her mouth again. Her mouth seemed to have a private existence of its own. It worked separate and apart from the rest of her, out and in, like a clam hole at low tide.

Occasionally it would say, ‘Pt,’ like some viscous substance coming to a boil.’ Chapter 11, page 89, in To Kill A Mockingbird. Mrs. Dubose also holds fast to the traditions of the South in this time period, mostly regarding guns, women, and people of color. The children fear the loaded pistol Mrs. Dubose hides under her jacket shawl and blankets. Mrs. Dubose notices Scout’s tomboy overalls and states negative expectations for her future. “What are you doing in those overalls? You should be in a dress and camisole, young lady! You’ll grow up waiting on tables if somebody doesn’t change your ways.

In To kill a mockingbird, chapter 11, page 85. When Atticus speaks in favor of Tom Robinson, a man of color accused of raping a white woman, Mrs. Dubose rudely disapproves. Jem pays her back by beating off the flowers on her camellia bushes. For a punishment, Mrs. Dubose demands Jem to read to her. She uses an alarm clock to keep up with the time he can stop, but to Jem’s horror, she adds time to the alarm every day. Unknown to Jem, the alarm also shows when it’s time for her next dose of morphine.

Later on in the novel, Atticus explains why Jem had to read to Mrs. Dubose. It served to distract the aging woman so she could die cleansed of morphine while battling a serious illness. ‘I wanted you to see something about her — I wanted you to see what real courage is, instead of getting the idea that courage is a man with a gun in his hand. It’s when you know you’re licked before you begin but you begin anyway and you see it through no matter what.”( Chapter 11, page 93) Atticus helps Jem and Scout see past her saliva and repulsiveness. Mrs. Dubose, according to Atticus, was a brave lady who always spoke her mind and attempted to achieve her goal. Jem b, after his grudge against her’ learns to care about Mrs. Dubose and the camellia she left him. “You rarely win, but sometimes you do. Mrs. Dubose won all ninety-eight pounds of her. According to her views, she died beholden to nothing and nobody. She was the bravest person I ever knew.’ (chapter 11. Page 93) Mrs. Dubose’s addiction to morphine symbolizes the grasp racism has on Maycomb during the time period of the book. She works to restore herself and her traditional Maycomb values. Metaphorically, the drug-induced daze of Mrs. Dubose shows the South’s refusal to own and overcome its prejudice. Mrs. Dubose works to cleanse the morphine from her body and then shows the attentive approach we need to address a social injustice, even if that was never her intent.

The rude and aging Mrs. Dubose lives down the street from the Finches. Mrs. Dubose shows the novel’s theme; people aren’t always what they seem. They may be better, worse, or have outstanding qualities and values if we look beyond their surface. With a guide from Atticus, we can change our perspective of Mrs. Dubose from a heartless, rude, traditionalist, and prejudice to a courageous fighter.

Mrs. Henry Lafayette Dubose in To Kill a Mockingbird. (2021, Mar 12). Retrieved from https://studymoose.com/mrs-henry-lafayette-dubose-in-to-kill-a-mockingbird-essay 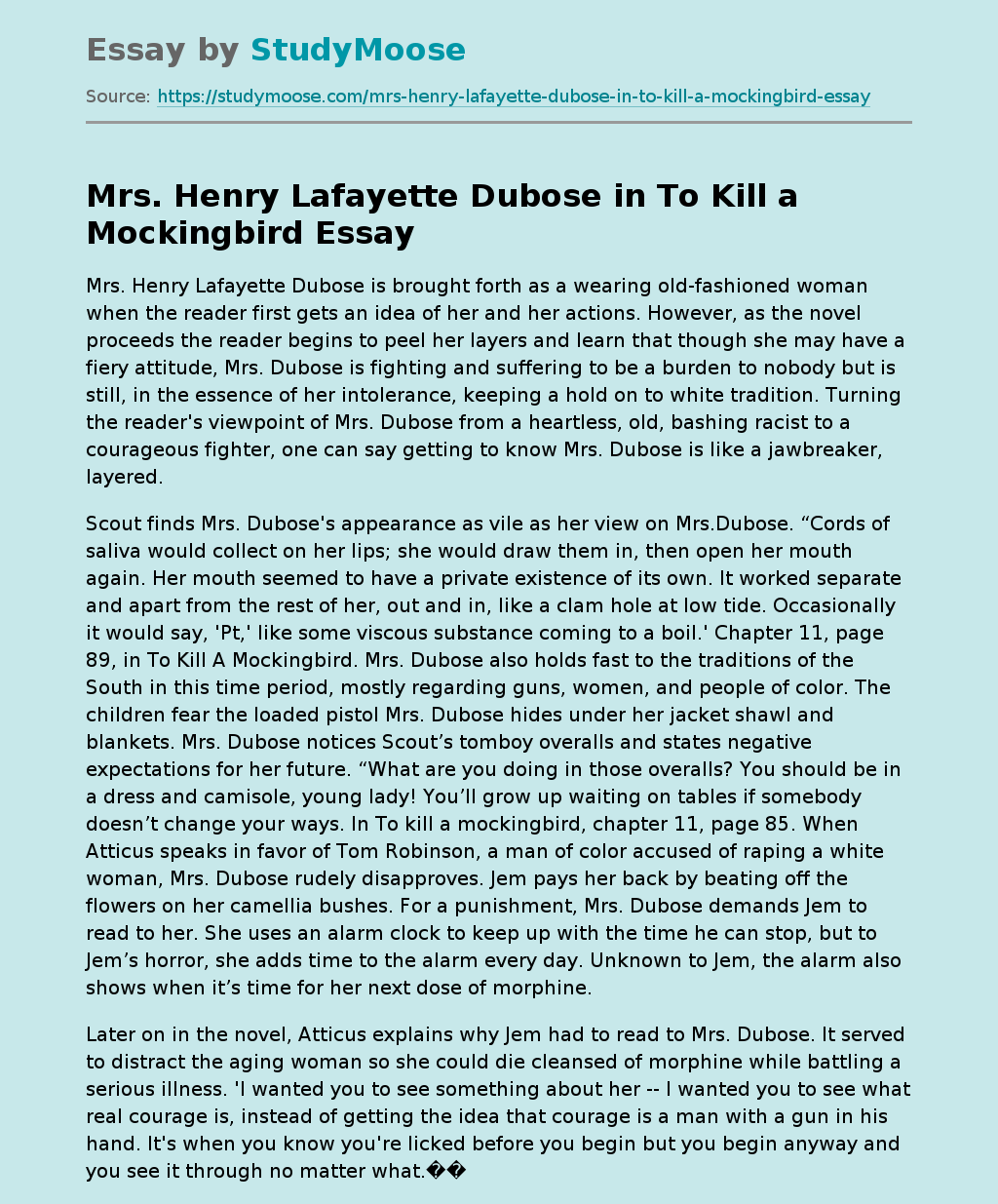