Mrs. Dubose Personality in To Kill A Mockingbird

In the story To Kill a Mockingbird Mrs. Dubose is portrayed as a mean and devilish woman, but would she still be that way if it were not for her addiction? Her personality fits so well in the theme on Harper Lee’s book To Kill a Mockingbird that the purpose for her character is hard to question. She is shown as a terrifying person when Lee describes how she looks. Scout describes that her face was “like the color of a dirty pillowcase, the corners of her mouth was wet and would go down the creases of her face; she had old age spots on her cheeks, pale eyes, and black pupils” (Lee 106).

Don't use plagiarized sources. Get your custom essay on
“ Mrs. Dubose Personality in To Kill A Mockingbird ”
Get custom paper
NEW! smart matching with writer

Scout also notices her hands and how there are “knobby knuckles” which would tend to seem scary to a younger kid (Lee 106). Towards the end of her life she shows thanks and gratitude towards Jem even though she does not like the family. She is a kind person when her maid Jessie prepares a box for him before she passes.

In the box she put a “single white camellia” (Lee 112). I on the other hand think that she could be a good person.

Although many people will argue that Mrs. Dubose is a mean person, I truly believe that she has a soft side to her and can be caring. I can agree that she has a mean side to her when she would make fun of Scout wearing her overalls and saying “You should be in a dress and camisole, young lady! You’ll grow up waiting on tables if somebody doesn’t change your ways…” (Lee 101).

On the other hand she shows kindness and courage when before she passes when she gives the “single white camellia” to him. People may say that there are a lot of things that would mainly make Mrs. Dubose a bad person, but what they may not think of is her addiction to morphine (Lee 111). “She was put on it for several years by her doctor” (Lee 111). It took a lot of strength to try to quit her addiction and be clean. The medication affected her moods and her actions in the book To Kill a Mockingbird. Mrs. Dubose not only was struggling both medically with her addiction and physically with the strength that it would take to overcome it.

For instance, whenever she was on her medication she would be overcome with these “fits”(Lee 111). Mrs. Dubose was suffering from addiction which is “the state of being enslaved to a habit or practice that is psychologically or physically habit-forming”(Dictionary). During the time that Jem was reading to Mrs. Dubose Atticus said to both of them that, “Most of the time that you were reading to her I doubt that she heard a single word you said. Her whole mind and body were concentrated on that alarm clock..”(Lee 111). In this situation, Mrs. Dubose is shown that she is truly addicted to this pain killer drug and all day she concentrates on the time she gets it. Her actions resemble to my life when my uncle used to smoke and he would go outside just to have a cigarette. At the same time, this was happening Mrs. Dubose was also struggling physically.

As a result of a previous medical condition which was what resulted in a physical struggle. She showed physical struggle when she was addicted to morphine. She knew that she was going to die because of it and understood the consequences of her addiction. Since she was wanting and trying to get off the drug she faced harsh physical struggles. She struggled with “fits”, fits are “a sudden, acute attack or manifestation”. Those fits are what caused her to be in terrible moods which ultimately made her angry and made her yell at Jem and Scout. Another physical struggle that she had was when she would get really sick because of her addiction and just being on the medication. In both of her physical and her mental struggles, she was a strong woman and she tried her best and she passed drug free.

In conclusion, Mrs. Dubose was portrayed as a mean person. Her addiction is what made her a mean and a terrifying person and her character fit so well in both the book To Kill a Mockingbird and the time period that the story takes place. When Lee describes Mrs. Dubose it shows how she would be considered a scary person to be around. In the end of her life she showed her compassion, courage, and strength that she had all along. That is why I still believe that Mrs. Dubose was a kind person when she was alive.

Mrs. Dubose Personality in To Kill A Mockingbird. (2021, Mar 12). Retrieved from https://studymoose.com/mrs-dubose-personality-in-to-kill-a-mockingbird-essay 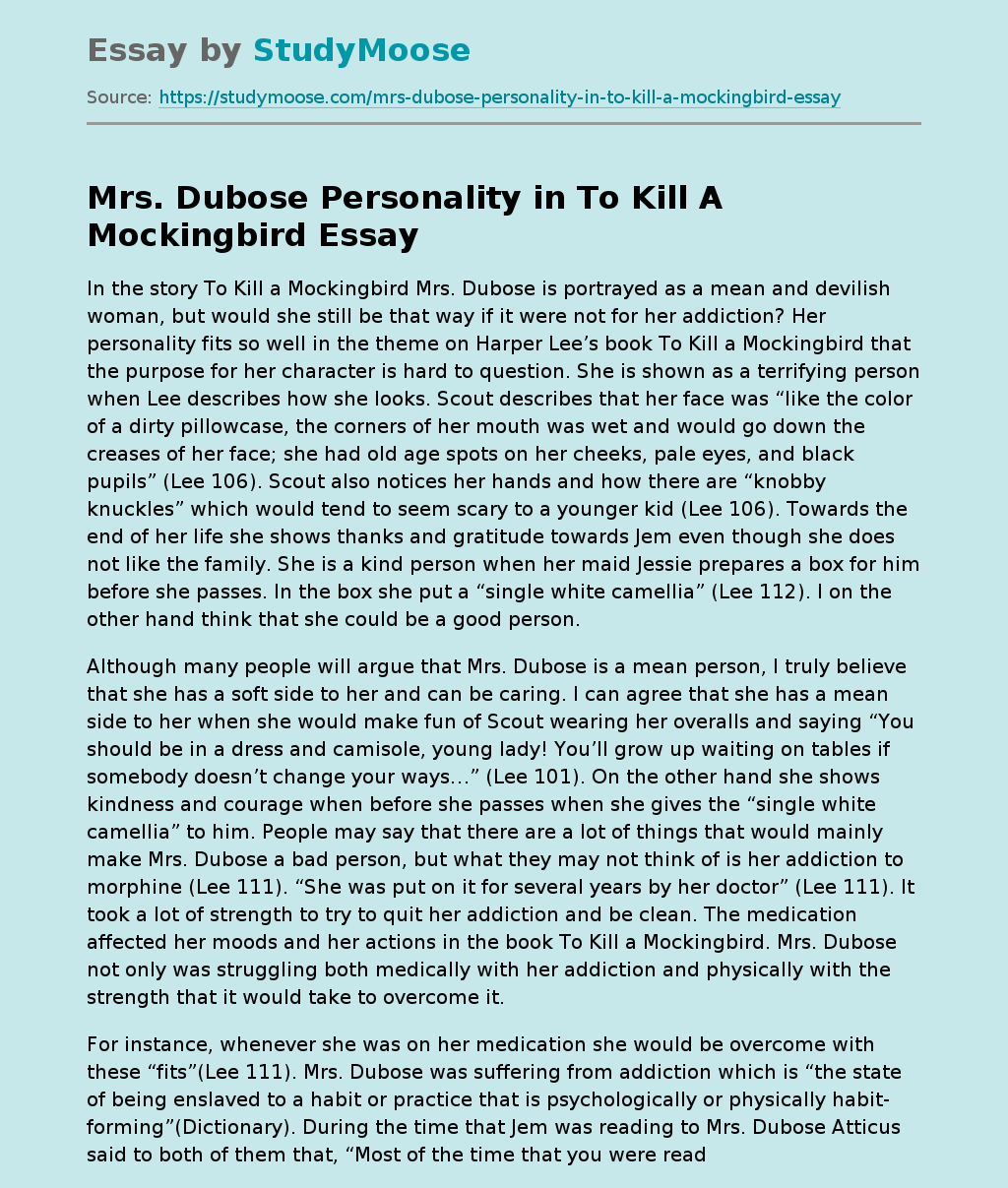