Modern Technology Has Brought the Resurgence of Identity Theft

Identity theft is one crime that has spawned from technological advancements. Criminals have developed numerous strategies on how to steal confidential and personal information. Dealing with identity theft may be a challenge since law enforcement personnel may not be fully competent in handling the cases since they may lack the required skills to be able to deal with such a crime while private people and even businesses have lost much because of this type of crime.

The number of cases of identity theft has been constantly on the rise; however, the prevalence of the crime may as well be blamed on modern technology itself.

Don't use plagiarized sources. Get your custom essay on
“ Modern Technology Has Brought the Resurgence of Identity Theft ”
Get custom paper
NEW! smart matching with writer

Modern technology has brought about many conveniences for ordinary people and even for identity thieves. From only less than 10,000 reported cases of identity theft in 1999, the figure steadily climbed reaching around 50,000 in 2003 and more than 80,000 in 2006 (Infocycle, 2007). In the United Kingdom, credit card fraud has also been consistently increasing.

CPP Card Protection has indicated a 77 percent increase in credit card fraud compared to the figure on 2006 (Experian QAS, 2008). According to a study by Gartner, identity theft claimed 15 million victims in 2006 alone. The US Justice Department has recorded 226 cases of identity theft in 2005 but in the first half of 2006 alone, there were already 432 cases. The FBI also indicated that it is working on 1,587 cases relating to identity theft (ITRC, 2007).

Preventing identity theft may not be as easy as it seems. Joel Reidenberg and Lawrence Lessig said concentrating on the “architectures of control” to prevent identity theft is the way to go.

Solove, on the other hand, indicates that “architectures of vulnerability” should also be considered in addition to “architectures of control”. According to Solove, shaping architectures should be the focal point in the protection of privacy and not on remedies and penalties. He noted that architectures often provide a vulnerable point that identity thieves take advantage of.

It is this lack of security that identity thieves are able to use a person’s personal information. He suggests that a public identification system be created as a solution to the problem (Solove, 2003). It is exactly new technology that produces these architectures and they are greatly flawed since many people can still bypass its security functions evidenced by the prevalence of identity theft on the Internet. Identity theft has gained much notoriety in the advent of buying and selling on the Internet.

However, identity thieves can still use the old methods for obtaining personal information. Common methods are stealing wallets or mails, looking through residential trashcans or business dumpsters, posing as someone legally permitted to access personal information such as credit reports, or bribing their way to get the information (Newman, et. al. 2005). A phishing scam is another method of getting personal information out of a person. The Anti-Phishing Workgroup indicated that there are only 4,564 phishing websites in July 2005 but the number increased to 23,670 as of July 2006.

A study at the University of Indiana also indicated that 14 percent of phishing scams are successful which contradicts the Gartner report which indicates only a three percent success rate. The Gartner research also found out that financial losses from phishing scams were $137 million in 2004 rising to $2. 8 billion in 2006 (ITRC, 2007). The fight against identity theft may be considered rather ineffective since law enforcement personnel lack the necessary resources to combat such a crime which is computer-related.

Britz indicates that this kind of crime requires law enforcers to have knowledge of computers and other digital stuff. It may be noted that many law enforcement agencies do not have well-trained personnel to handle such cases. These personnel may also be acting several capacities at a given time. Computer technology has increased at an exponential rate as did technology related crime and this would require that law enforcers be trained to effectively handle such crimes (Britz, 2004). As technology improves, security is being compromised and this can be proven by the increasing number of identity theft crimes.

While it is true that online banking and other services on the Internet provide much convenience, it also provides lesser risks of capture for identity thieves. Law enforcers could do little do prevent identity theft or to investigate such since not all of them have the capacity to do so and identity thieves are improving their arsenal of identity stealing techniques. Technology might also be considered as the root of the prevalence of identity theft. Even as identity theft was not considered a crime before 1998, it has existed for a long time.

Modern computing and telecommunications technology has once again popularized identity theft since identity thieves can better elude law enforcers compared to going to a bank and making a transaction using stolen information (Arnold, 2000). Legislation has always tried to address cyber crime, but it is challenging for lawmakers to keep up since technology quickly evolves and cyber crime evolves with it. A good approach would be improving security measures, educating users, adopting a vigilant approach in combating cyber crime and a police force that is well-equipped to handle such crimes (Alaganandam, et. al. , 2005).

Identity theft and other cyber crimes are also classified as white-collar crimes, thus, offenders do not receive harsh penalties. They can even use the money plundered to pay for their defense and they serve at least only one year in prison (Arnold, 2000). Identity thieves must be dealt with harsher penalties since they operate on a much larger scale today and are even comparable to bank robbers only less inclined to being caught and given much less media attention.

The number of cases of identity theft is increasing at an exponential rate but this could most likely be blamed on modern technology especially since the Internet has become commercialized. New technology comes with new opportunities for identity thieves to gain access to personal information and using it for personal gains. Legislation can address this problem but it would prove to be a challenge since identity thieves are finding new ways of how to steal personal information as technology develops.

Legislation must also address this by rendering harsher penalties for cyber criminals as they operate just like ordinary criminals, the only difference is that they work discreetly and have not been given media attention. Also, the victims do not really know that they have been victimized until after some time the thieving takes places. References Alaganandam, H. , Mittal, P. , Singh, A. , & Fleizach, C. , 6 December 2005. Cybercriminal Activity. Retrieved September 7, 2008, from sysnet. ucsd. edu/~cfleizac/WhiteTeam-CyberCrime. pdf Arnold, T. 2000 June.

Modern Technology Has Brought the Resurgence of Identity Theft. (2021, Jul 15). Retrieved from https://studymoose.com/modern-technology-has-brought-the-resurgence-of-identity-theft-essay 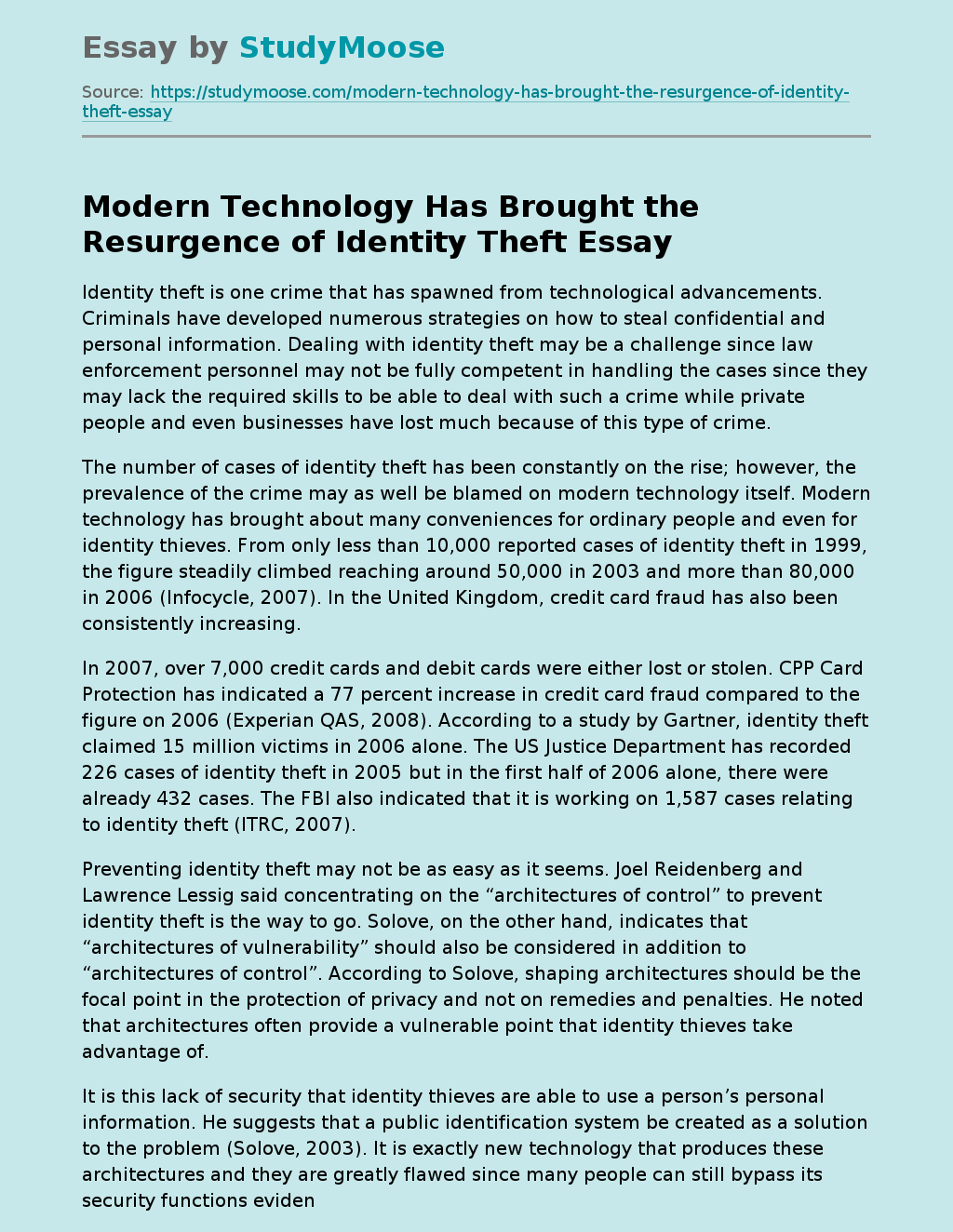