Identity Theft: How to Protect Your Personal Information

Identity theft began to emerge as a serious problem in the mid-1990s. It has been coined by many leading experts in the criminal justice arena as the “crime of the new millennium”. Identity theft without a doubt is the fastest growing crime in our society. Between 2010 and 2011 it is estimated that 10 million Americans were victimized by this crime with a combined individual and loss to business estimated at nearly 50 billion dollars. When identity theft occurs it claims two victims: first the persons whose identity was stolen and second the businesses that suffered losses owing to the criminal use of the stolen identity.

Don't use plagiarized sources. Get your custom essay on
“ Identity Theft: How to Protect Your Personal Information ”
Get custom paper
NEW! smart matching with writer

For a victim of identity theft it can take years to repair your credit report and your reputation. Swanson, Chamelin, Territo and Taylor (2009) suggest that the cost to individual victims to clear their names vary, but sources maintain that it requires as much as 600 hours of effort and up to $1,500 worth of lost earnings to correct credit and other related problems.

So what is identity theft, how does it happen, and what can Americans do to protect themselves for becoming victim to this crime? Using cash to pay for goods or services is somewhat a thing of the past. In today’s society we use our debit and credit cards to perform daily activities that include purchasing merchandise online, paying for groceries, dinning out at restaurants, and a wide variety of other transactions that involve money. What we may not be aware of is that in performing such tasks we are sharing personal information via the internet which can be stored, collected, and processed which are all opportunities for identity theft.

Identity thieves use a wide variety of tactics to obtain a person’s identity. Statistically the most widely used method used by identity thieves is stealing wallets and purses which contain such items as identification, bank, credit, membership, and other types of cards.

Another method is stealing mail which provides the thieves bank statements, preapproved credit offers, and other personal data. Some identity thieves have gone to such lengths as completing a change of address at the post office to divert mail to another location so the victim will be unaware of any wrongdoings for months. Would-be thieves have also been known to do a little dumpster diving in order to obtain personal data used to commit identity theft. As technology advances, so does the ways in which perpetrators go about retrieving personal data from their victims. Some perpetrators fraudulently obtain their victims credit report by acting as a landlord or potential employer. Phishing is the most commonly used method to gain personal information via the internet. Using this method, identity thieves send emails claiming to be a legitimate source, such as Bank of America, eBay, Facebook, or a credit card company asking you to update their account information data.

Another form of phishing involves sending an email to notify the victim that they have won a prize such as the lottery, but in order to receive payment they must pay a processing fee in order to receive it, thus tricking the victim into giving up personal information. There are infinite ways in which perpetrators can obtain personal information used to commit identity theft, but what preventative measures can we take to prevent from becoming a victim. No matter what precautions you take or how careful you are with safeguarding your personal information there is no 100% way of preventing identity theft. The Federal Trade Commission, the U.S Department of Justice, and the U.S Attorney General’s Office have all stated that there is no full proof method to avoid this crime (Rocha 2010). However, by making yourself aware of the threat and becoming aware of the signs of being victimized you can minimize the risk of becoming a target.

Experts in identity theft have published five steps to avoid becoming a victim. First, pay close attention to your credit report. Look for anything that is out of the ordinary such as newly opened credit cards or delinquent transactions that you did not authorize. By law, the federal Fair Credit Reporting Act requires that you are provided with a free credit report annually. Second, never give out personal information over the phone or via the internet until you are certain of whom you are dealing with. As stated before, identity thieves will pretend to be reputable companies such as banks and credit card companies in an attempt to steal your personal information. Third, be over protective of your mail. All mail, to include junk mail, contains some type of data that identity thieves can use to steal your personal information. Identity thieves have been known to take victims pre-approved credit card statements out of mailboxes and then open the account using a different address so the victim is unaware the transactions are even occurring for months. Fourth, don’t carry any unneeded social security cards, credit/debit cards, or passports unless you intend to use them that day. Experts say if you must carry these items on you keep them in a secure location at all times.

Finally, when you do have to disclose personal information at your place of business, doctor’s office, school, or anything that has your name on it ask if your information will be shared with any outside organization. As a United States citizen you have the right to ask that your information be kept confidential. An estimated 221.3 million people in the United States access the Internet. They do so for a variety of reasons: to exchange e-mail, obtain news, entertain themselves, and manage their finances (Pratt, Holtfreter, & Reisig 2010). Of the 221.3 million internet users, one in nine report being victimized in the past year. That roughly translates into nearly 25 million fraud victims which is 18 time the number of armed robberies, rapes, and aggravated assault victims combined. As stated earlier, although there is no fool proof way of preventing yourself from becoming a victim, there are several ways you can educate yourself from being a target for identity thieves.

Identity Theft: How to Protect Your Personal Information. (2021, Apr 10). Retrieved from https://studymoose.com/identity-theft-how-to-protect-your-personal-information-essay 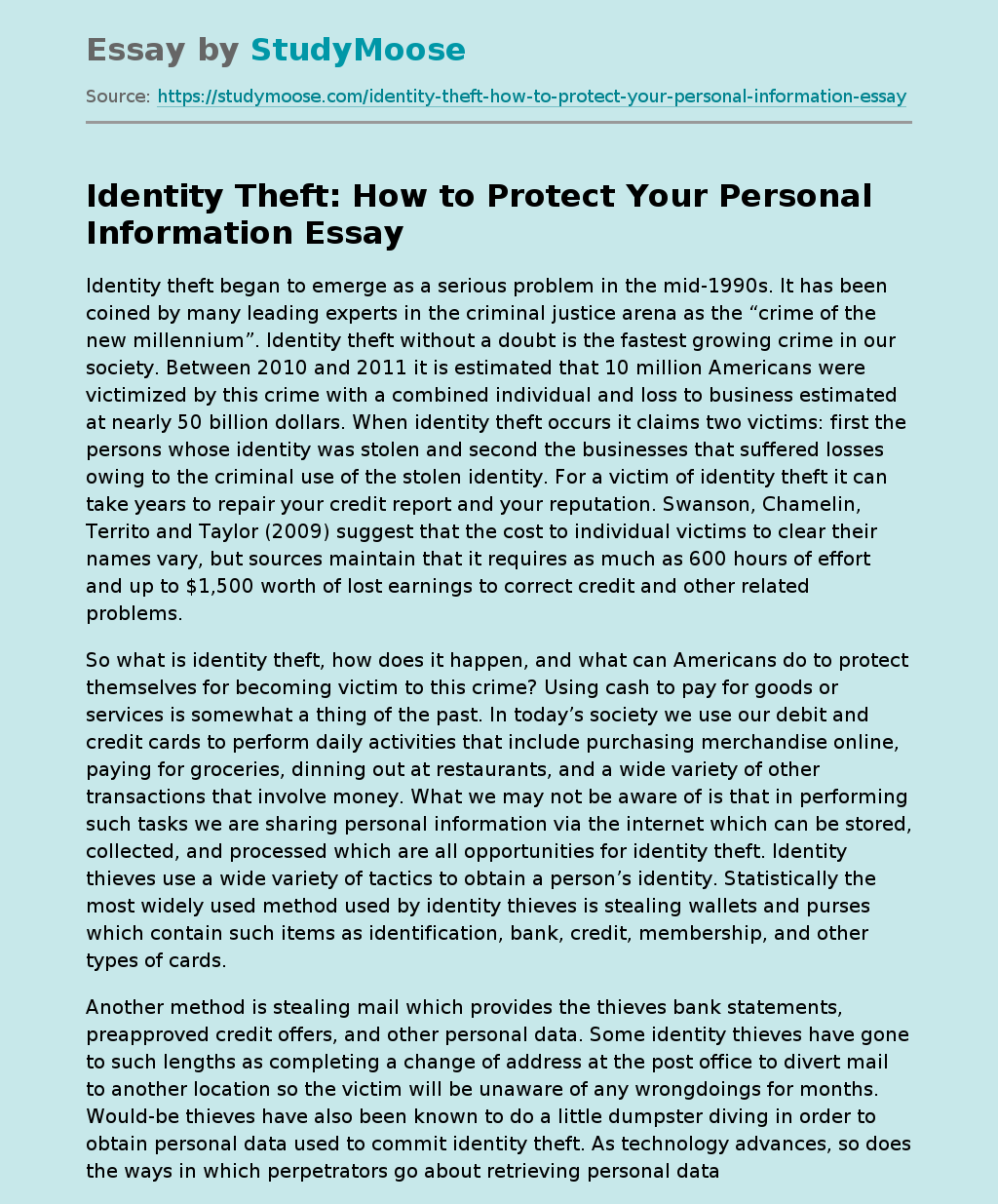