In the past few years, increase in cybercrime conducted through the Internet, has emerged as a significant concern for government. The Cybercrime Prevention Act of 2012, officially recorded as Republic Act No. 10175, is a law in the Philippines approved on September 12, 2012. It aims to address legal issues concerning online interactions and the Internet in the Philippines. Among the cybercrime offenses included in the bill are cybersquatting, cybersex, child pornography, identity theft, illegal access to data and libel. Under the new act, a person found guilty of libellous comments online, including comments made on social networks such as Facebook and Twitter or blogs, could be fined or jailed.

Don't use plagiarized sources.
Get Your Custom Essay on Cybercrime Law Just from $13,9/Page

The act is also designed to prevent cybersex, defined as sexually explicit chat over the internet – often involving “cam girls” performing sexual acts in front of webcams for internet clients. The Act has universal jurisdiction: its provisions apply to all Filipino nationals regardless of the place of commission. Jurisdiction also lies when a punishable act is either committed within the Philippines, whether the erring device is wholly or partly situated in the Philippines, or whether damage was done to any natural or juridical person who at the time of commission was within the Philippines.

Several petitions have been submitted to the Supreme Court questioning the constitutionality of the Act. While this law is being discussed, many reactions has been made. According to Senator Edgardo Angara, the main proponent of the Act, it is a legal framework to protect freedoms such as the freedom of expression. However, Senator Teofisto Guingona III criticized the bill, calling it a prior restraint to the freedom of speech and freedom of expression. Also, the law generated a number of protests – anonymous activists hacked into government websites, journalists held rallies & reactions made in the online community like facebook and twitter.

The research. The study intended to answer these questions,
1. What is cybercrime law?
2. What are its advantages & disadvantages?
3. Why is it considered a hindrance to IT students?
Significance of the Study
The study provided information about the Cybercrime law. 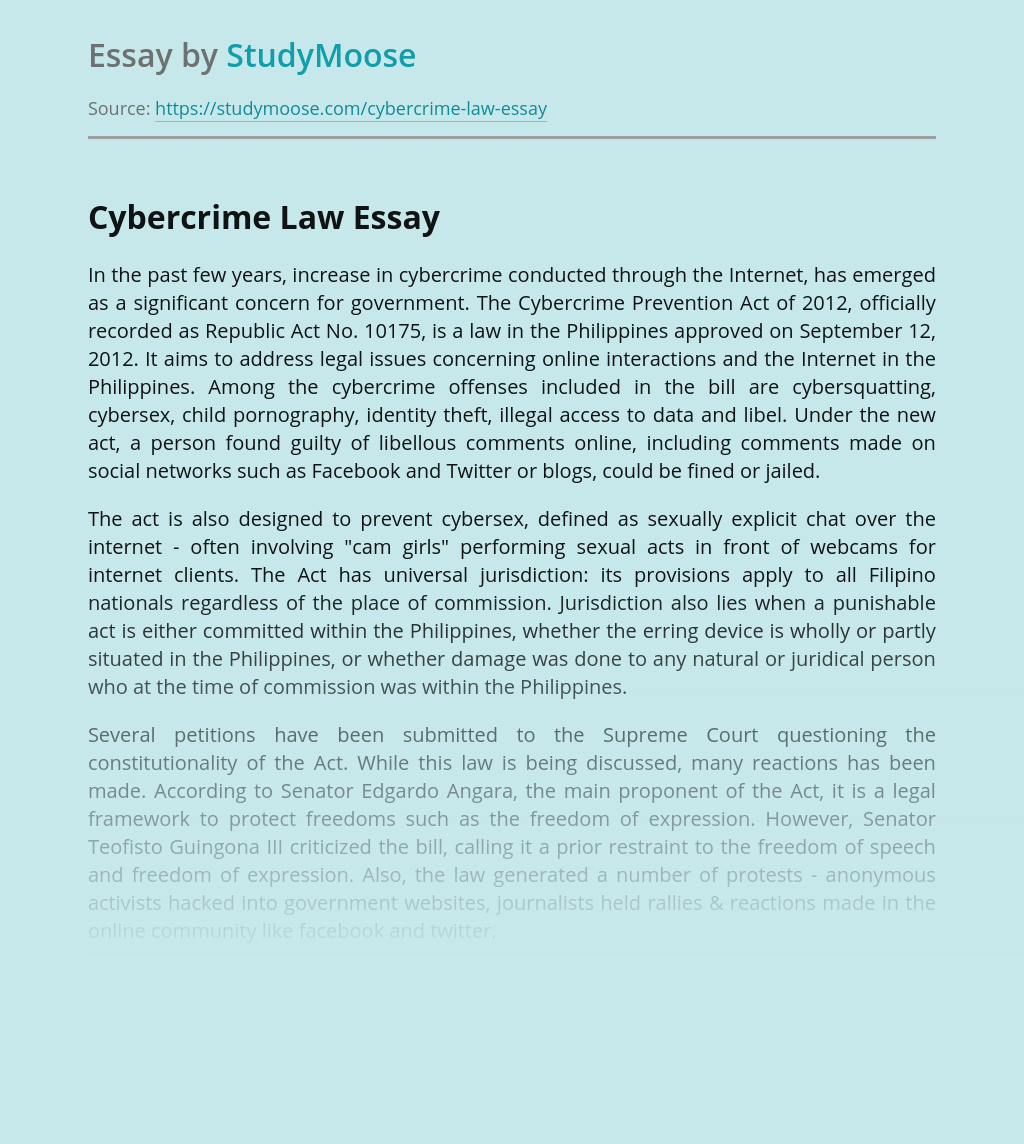 Describe the potential tension between maintaining an individual’s confidentiality and disclosing concerns. Even though parents, children and practitioners have the right to confidentiality there are some occasions where maintaining confidentiality is not possible and must be broken. If there are concerns over a child’s wellbeing, this must be reported or if you are aware of... VIEW ESSAY

Gun Control Have you ever been involved in a home invasion? How did you protect yourself, or if this would happen have you thought about how you would protect yourself? This is a real concern in families’ minds across the nation. When I think of having a future family I think about how I would... VIEW ESSAY

There are two different instruments used in reporting crime. There are also major crimes reporting program used in the United States. Don't use plagiarized sources. Get Your Custom Essay on Cybercrime Law Just from $13,9/Page Get custom paper These major crime reporting programs do have a purpose and does give statistical information on crime in the... VIEW ESSAY

The Scarlet Letter is an exemplification of the theme of Crimeand Punsihment. It is mainly the story of Crime, say sexual crim, and the consequences arising therefrom. The act of adulteyr is certainly a crime against the individual, be that individual, the wronged wife or a hsuband. Similarly it is also a crime against society,... VIEW ESSAY