Modernist composers created new and entirely novel approaches by writing works without a tonal center or clear sense of meter.
Perhaps the single most remarkable aspect of music in the twentieth century is that for the first time listeners could hear music when and where they wanted to hear it.
Debussy’s relationship to the artistic movement known as ________ helps give his music the quality of “suggesting rather than stating.”
Impressionism
Debussy’s works that are now recognized as masterpieces were
initially greeted with indifference or even scorn.
Don't use plagiarized sources. Get your custom essay on
“ Modern Music and Sounds ”
Get custom paper
NEW! smart matching with writer
What type of harmonic language did Ives use to challenge notions of musical correctness?
tonal and atonal
How did Ives describe the nature of his “unanswered question”?
the perennial question of existence
What is one reason Charles Ives was able to write such dissonant music?
He held a day job in insurance so he could support his family and still compose music at his lessure.
What is the central point of action in the scenario of The Rite of Spring? a young woman is sacrificed to the gods to ensure the repeated return of Spring the following year
What is the name for a harmonic system that uses more than one tonal center?
Polytonal
Ragtime music was and became
a. was dance music b. became immensely popular with the young people c. was a foundation of jazz music d. all of the above.*
A hemiola is
A more complex type of syncopation than what is found in many other ragtime compositions.
Joplin called his pieces _______ ______ in an attempt to make them sound more refined than other ragtime pieces.
Get to Know The Price Estimate For Your Paper
Topic
Number of pages
Email Invalid email

“classic rags”
In 1916, Scott Joplin recorded “Maple Leaf Rag” on a piano roll (a long strip of paper) designed to be played on a player piano.
Blues songs were originally transmitted how?
orally without any formal notation.
The instrumentalists who created bebop wanted jazz to be treated as serious music for listening, rather than as frivolous entertainment for dancing.
What was the hallmark of Charlie Parker’s performance style? virtuosic soloing with lightning-fast technique
In Piano Study in Mixed Accents, the meter is irregular groupings of anywhere from two to eight notes
The melodic line in Crawford’s composition lacks a sense of harmony because it projects no sense of any tonal center
Ruth Crawford was the stepmother of Pete Seeger
In 12-tone composition, rows could be written all of the above.
Neoclassicism was an attempt to incorporate past styles into a contemporary idiom.
Tailleferre’s group of composers, Les six, sought to __________. separate their French style from any German influence
William Grant Still’s “A Black Pierrot” is based on the poetry of Langston Hughes
What does it mean that Aaron Copland’s “Hoe-Down” is composed in an “open” fashion?
He leaves sonic space between instrumental parts, much like the open space of the American West.
The opening melody, and the one that keeps returning in “Hoe-Down,” is a traditional fiddle tune called
“Bonaparte’s Retreat”
Why was Copland not identified on the Ed Sullivan show in 1956 when his Lincoln Portrait was performed?
He was suspected of either being a communist or a communist sympathizer
How did Bartok’s ethnomusicological work affect his compositional style?
It allowed him to draw from the “uncontaminated” musical styles of folk cultures
Which orchestra commissioned Bartok’s Concerto for Orchestra?
Boston Symphony Orchestra
In what ways is an operetta different from an opera?
An operetta uses spoken dialogue and is typically more light-hearted
Bernstein’s West Side Story can be characterized as a modern musical retelling of Romeo and Juliet.
In “Tonight,” Bernstein uses additive form to build emotional complexity by adding multiple characters and contrasting melodies
Which musical considers the aftermath of U.S. military involvement in Vietnam?
Miss Saigon
The term “prepared piano” refers to the insertion of various pieces of hardware into a piano to alter its sound.
The sound of the prepared piano has been compared to that of the Indonesian gamelan, a percussion ensemble whose timber Cage knew well from recordings.
Cage once declared which of the following? “Everything we do is music”
In Einstein on the Beach, a great deal of the text is recited, with limited singing.
Philip Glass is known for composing in a style known as minimalism, which can be described as a all of the above, a brief musical idea or group of  ideas is repeated and tried incrementally over a long plan of time, with a relatively slow rate of change.
“Knee Play 1” unfolds over a constantly repeated bass in the organ called a(n) ostinato
Which film, released two years before “school day,” connected teen sex and delinquency with rock ‘n’ roll music?
Blackboard Jungle
Chuck Berry developed a distinctive performance gimmick known as the Duck walk
Which television show began airing in 1957 and spread new records, artists, and dance styles across the country? American Bandstand
The backing texture of “Fight the Power” is made of up layers of vocal clips and sound fragments called Samples
What is the form of “Fight the Power” verse-chorus
Public Enemy’s records in the second half of the 1980s were groundbreaking for their politically charged, black nationalist sentiments
In the visual arts and architecture, …. favored clean, straight lines and functionality
Postmodern musical style combines modern and traditional elements 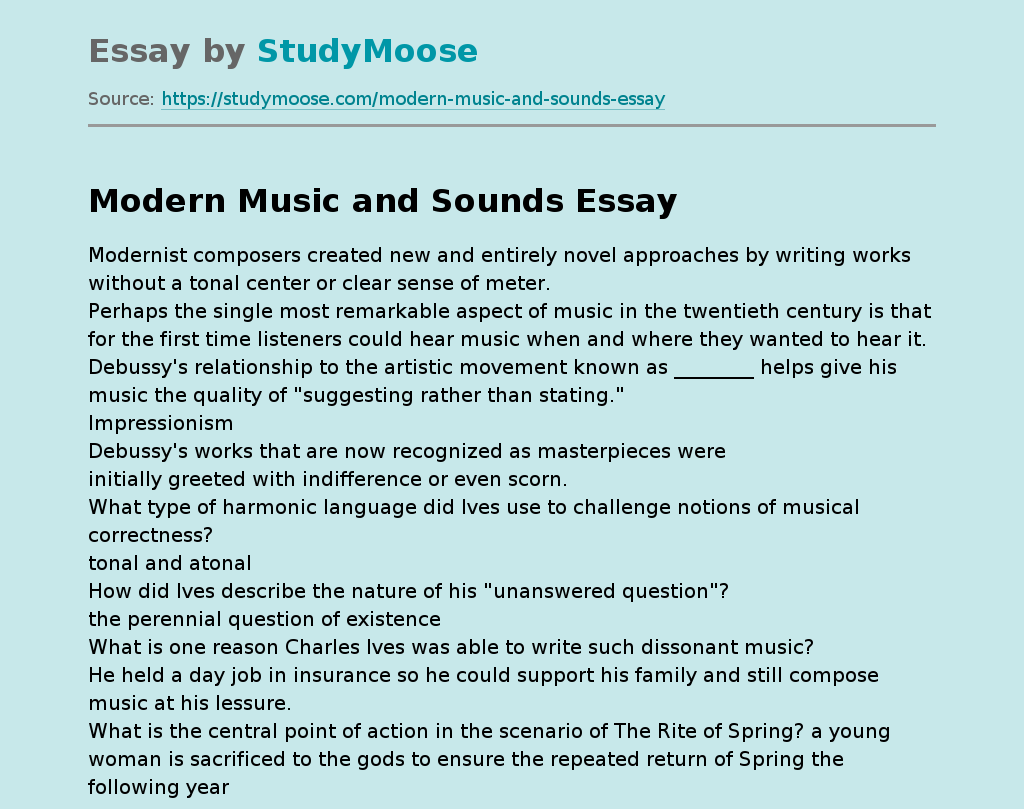