Transcendentalism influenced the 19th century and emphasized on the value of the individual and intuition. It was an idea that people were at their best when they we self reliant and independent. Ralph Waldo Emerson was the movements most important figure along with his main follower Henry David Thoreau. These two people were the most influential people during this movement. Transcendentalism was all about being an individual and it still endures today in modern culture. It is particularly evident in modern music.

Don't use plagiarized sources. Get your custom essay on
“ Transcendentalism in modern music ”
Get custom paper
NEW! smart matching with writer

Modern music expresses individuality and the idea of being something other than the majority.

” The cage is the social norm that keeps people from being individuals. By breaking out of this “cage” Eminem is being his own person and being an individual. In another one of Eminem’s song he excepts that he’s different from everyone. He embraces his individuality.

In the song “Legacy” he says “Now I think the fact that I’m differently wired’s awesome cause if I wasn’t, I wouldn’t be able to work words like this and connect lines like crosswords. ” His success was a result of his individuality.

He says that he’s differently wired and that’s why he’s so good at rapping. He is known as one of the best rappers of all time. This status wasn’t achieved by being just like all the other rappers, he’s different and his lyrics are different as well. Eminem worked extremely hard to become this great rapper and his song “Lose Your Self” certainly shows how important music was to him.

In the song it says “You better lose yourself in the music, the moment-You own it, you better never let it go. ” Part of the transcendentalist movement was that man isn’t satisfied until he has poured his heart and soul into his efforts. That’s exactly what Eminem has done. He seized that moment and Prev Page captured it. He made music his life. Also in this song it says “This world is mine for the taking-Make me king, as we move toward a new world order-A normal life is boring, but superstardom’s close to post mortem. ” The normal life is boring to Eminem he live a life different than the majority.

He doesn’t conform like many other people. Through the eyes of transcendentalism Eminem is a great example of how transcendentalism is still embraced in modern music. Another artist that expresses individuality is Kid Cudi. In the song Just What I Am rapper Kid Cudi says “I’m just what you made God-Not many I trust I’mma go my own may-God-Take my fait to wherever you want. ” He’s his own person and is listening to God and what he thinks God would want him to do not what others think he should do. He does his own thing, he is an individual.

Also in the song “Soundtrack To My Life” he says “I control my own life, Charles was never in charge No sitcom could teach Scott about the dram. ” He states that he’s in control of his life and that his life isn’t influenced by other people. He doesn’t conform to the norm of society like other musicians. He references a show called “Charles in Charge” where the character Charles had a hard time controlling his family but the actor Scott had full control of the character. It’s a play on words because Kid Cudi’s name is also Scott and he is in total control of his character.

Kid Cudi easily pushes conformity away and doesn’t let judgment affect him because in a song called “Up Up and Away” he says ” I’ll be up, up, and away- Up, up, and away-Cause they gonna judge me anyway, so whatever. ” It doesn’t bother him he excepts his individuality and doesn’t let it change him or influence him to change. He is comfortable in his skin and is self reliant. He’s the definition of an individual and transcendentalism is evident throughout almost all of his music. 2pac (Tupac Shakur) is known as one of the most influential rappers of all time and his music expresses transcendentalism.

He had a hard life in New York with a drug dealing father and a missing mother. Although he had an awful life he was optimistic and hopeful this is shown in all of his music. In the song “Keep Your Head up” 2pac raps about being yourself and doing what you believe is right. He wants to start a movement that influence people to act for themselves. A movement where people will be influenced to change and treat others better like his song “changes. ” He wants to make a difference and is doing so through his music. His songs all contributed to this movement he started.

Transcendentalism is shown in most if not all of his music because he wants to be his own person and wants to influence others people to do the same thing. Ralph Waldo Emerson and Henry David Thoreau’s work in our modern culture. Its proven through music. Their ideas of transcendentalism was to be an individual. Individuality was a key concept of their ideas. Many musicians and artists on modern culture express transcendentalism through their lyrics. Artists like Eminem, Kid Cudi, 2pacand many others are all individuals and show this in their lyrics.

These artists are not conformists and do not follow a guideline. They’re their own people and don’t let others dictate how they live/lived their lives. 2pac started a movement much like the Transcendentalist movement. He wanted people to do the right thing and not do what everyone else is doing. He promoted individuality just like Eminem and Kid Cudi. All these artists share the ideas of individuality. Ultimately Emerson and Thoreau’s ideas do work in today’s modern culture especially through music. 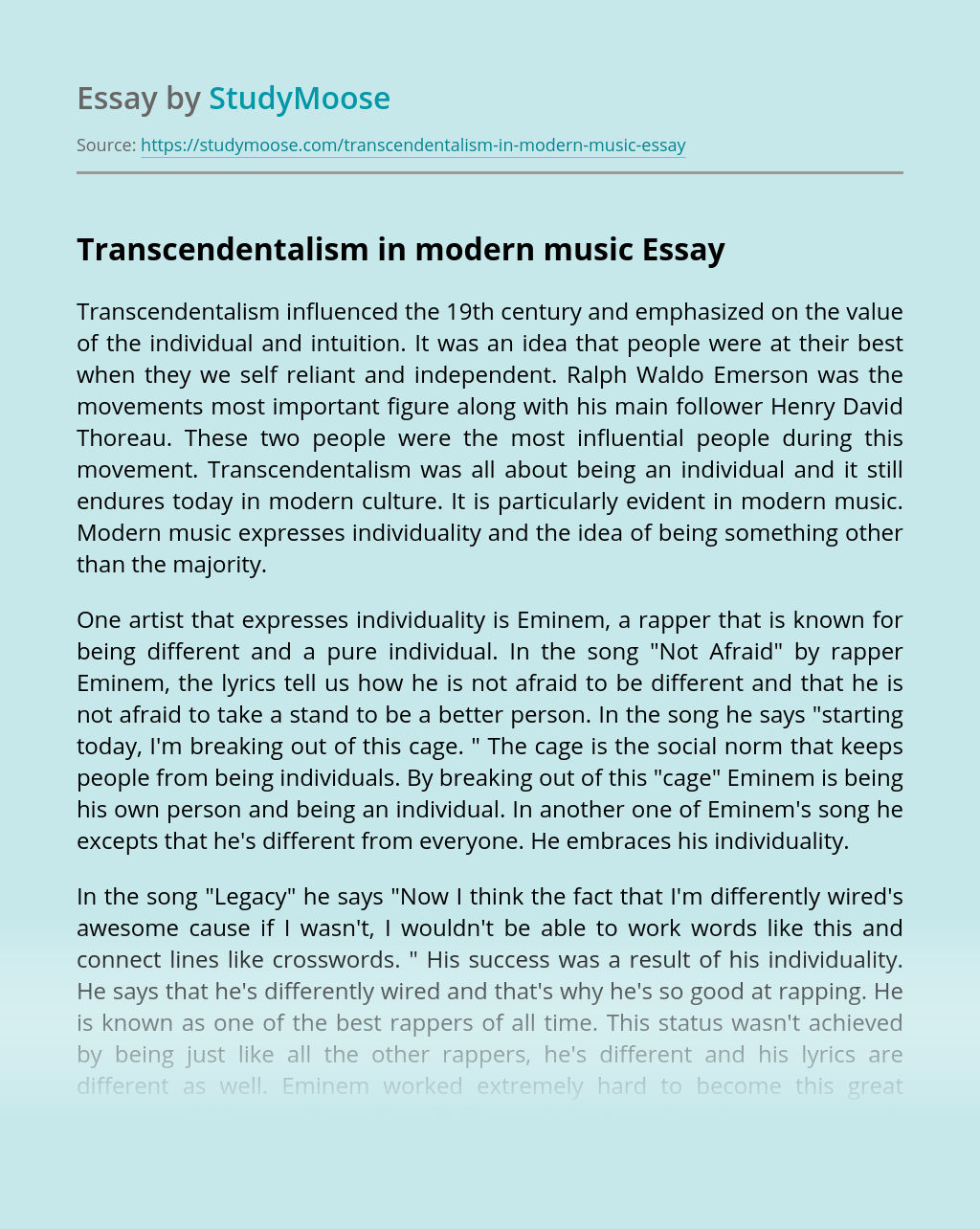