In Shakespeare’s play ‘A Midsummer Night’s Dream’ the quotation ‘the course of true love ne’er runs smooth’ is both true and false. Certain characters experience a smooth relationship whilst others do not. ‘A Midsummer Night’s Dream’ is one of Shakespeare’s plays that is more cheerful than others: the play is entertaining and Shakespeare uses the genre of comedy to keep his audience interested. He covers three different storylines to make up a complicated plot.

The play includes a love story, showing the changing relationships between four young people; Hermia, Helena, Lysander and Demetrius, and the play also consists of a magical plot about a world of fairies, in which the king of the fairies, Oberon, quarrels with his queen.

Don't use plagiarized sources. Get your custom essay on
“ A Midsummer Nights Dream ”
Get custom paper
NEW! smart matching with writer

Hermia and Lysander are one of the many couples in the play which experience complications in their relationships as a couple. The first dilemma which is keeping them apart is Hermia’s father; Egeus ‘Full of vexation come I, with complaint against my child’. He describes Lysander’s love for Hermia as a spell, which causes her to only see good things in him, not the bad, ‘This man hath bewitched the bosom of my child,’ Shakespeare’s use of the word ‘bewitched’ emphasizes the magical theme that runs throughout the play, however in this case he also uses it to show the evil spell he thinks Lysander has cast over Hermia.

Egeus does want Hermia to marry someone, but not Lysander. He has arranged a marriage between her and Demetrius, ‘Stand forth, Demetrius! My noble lord. ‘ Arranged marriages at the time were common and whomever a lady was to marry depended on her father’s consent, ‘I may dispose of her. ‘ Women had no rights at this time and were forced to do whatever they were told or else they could face the death penalty. This still happens today in some cultures and shows the contemporary relevance in the play.

Hermia is in a very difficult situation and Theseus knows this so tries to explain that her father’s judgment is better and she shouldn’t be questioning him. He comes across as very understanding and sympathetic and this is because he has been in the situation before when he was prepared to die for Hippolyta’s love. Theseus describes Hermia as ‘but a form in wax’, which can be moulded into whatever her father wants. Shakespeare uses this metaphor to emphasise that she should obey her father and has to do whatever he says.

Theseus tries to help her out by giving her different alternatives. Instead of being put to her death he gives Hermia another option: ‘To live a barren sister all your life. ‘ He offers her the chance of becoming a ‘nun’. This way her life would be spared and she would not have to marry Demetrius, however this is at the cost of not being able to be with Lysander. Hermia’s response to Theseus’ offer is simple: ‘So will I grow, so live, so die, my lord’, she turns the offer down and would rather life her live a nun than to marry Demetrius.

This once again echoes the speeches of Theseus, Lysander and Demetrius who are all prepared to put their lives on the line when in love and indicates that when love is not running smoothly it can make you irrational and drive you to extremes. Lysander shows how much he loves Hermia when he goes to the trouble of trying to win over her father. He tries to persuade him that he is a worthy man, explaining that he is as ‘well-derived as he / as well-possessed: my love is more than his / my fortunes every way as fairly ranked’.

This makes the audience feel sorry for him, as he seems genuine when he explains that he is good man to marry his daughter. Theseus leaves the two lovers by themselves to give them time to talk. Lysander can see that Hermia is upset and compares her cheeks to roses this shows Lysander’s concern for her. ‘How chance the roses there do fade so fast? ‘ This metaphor helps the audience imagine that she has gone pale and emphasizes their sadness as love is not running smoothly for them.

Lysander starts off with the quote ‘The course of true love never did run smooth’ and follows this with a list of examples in which love does not run smoothly, ‘Too high to be enthralled to low’. Hermia explains how the difference in social classes can keep people apart; none of these are reasons why they cannot be together so the audience feels sorry for them both. Another argument made is that some people are ‘Too old to be engaged to young’. The age difference can affect some people and keep them apart.

Finally Lysander states ‘Or else is stood upon the choice of friends’. The fact that other people have to decide whom they marry can deprive two people from being together, because someone else is choosing whom they are going to be with. Shakespeare shows us that people can be cruel and judgmental. Lysander seems to be very negative and states that even if they could be together there are still problems that could occur: ‘War, Death or sickness did lay siege to it’.

The fact that war can affect people in love relates to Theseus and Hippolyta. He becomes negative at this stage because he is trying to accept that they cannot get married, using a string of similes to exaggerate his feelings, ‘Swift as a shadow’ and ‘brief as the lightning in the night. ‘ This emphasizes that love doesn’t last and should be cherished while you have it. Hermia and Lysander go into the woods to escape the Athenian laws which prevent them from marrying.

Demetrius and Helena follow and Oberon the fairy king overhears them arguing and decides to intervene and try and resolve the situation. He asks Puck to go and collect a flower so he can put love potion on Titania’s eyes and also on the four lover’s eyes to resolve the arguments. ‘Fetch me that flower’, he tells Puck to go and put it on Demetrius’ eyes, ‘Thou shalt know the man by the Athenian garments he hath on’. However we know that there are two people in the forest wearing Athenian garments.

So this confuses Puck, he mistakes Lysander for Demetrius and Lysander wakes to see Helena, ‘transparent Helena, nature shows art that through thy bosom makes me see thy heart’. At the beginning we encountered true love running smoothly and not. Once again we come across another pair of characters who are unlucky in love. Hermia is Helena’s best friend and she (Helena) loves Demetrius, however we know he loves Hermia.

This causes Helena to become very jealous as we find out when she says, ‘Sickness us catching, O were favour so,’ Helena explains metaphorically that if Hermia’s beauty was a sickness then she would strive to catch it. Shakespeare uses many metaphors to exaggerate Hermia’s beauty and show the audience how envious Helena is of her best friend. ‘O teach me how you look, and with what art’. Helena compares her looks to art, which can be taught, but this is just metaphorical saying it and therefore she cannot be made to look like Hermia. 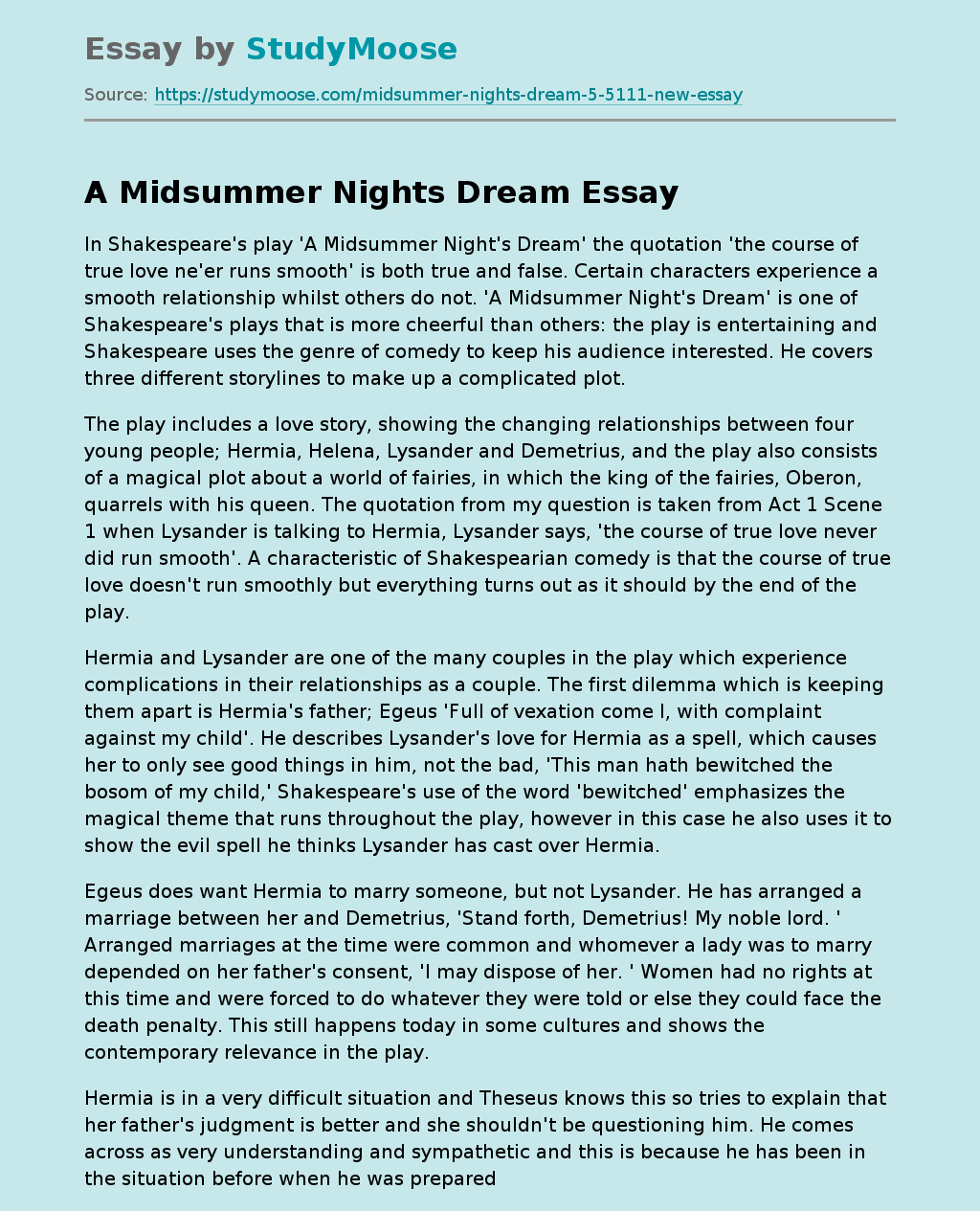