Don't use plagiarized sources. Get your custom essay on
“ The male and female relationship in Dead Poet Society and A Midsummer Night’s Dream ”
Get custom paper
NEW! smart matching with writer

However, the play, A Midsummer Night’s Dream shows the traditional beliefs and norms on gender. In this play, male dominancy not only exists between couples but also between father and daughter.

In Dead Poet Society, Mr. Perry is authoritarian and attempts to control Mrs. Perry in order to prevent her from pursuing her dream. We get to know about this when in the beginning Mr. Perry appears for the first time in the play to say Neil to quit all extracurricular activities, at that point he mentioned about his mother’s dream which she couldn’t fulfill: You know how much this means to your mother, don’t you? In most of the scenes in the play, we do not see Mrs.

Perry talking much and if she tries to say something, Mr. Perry without caring for what she is going to say interrupts her in between. In the last scene before Neil commits suicide, she wants to say something to Neil: We’ve been so worried about, and just then she is interrupted by Mr.

Perry. At this moment Mrs. Perry was the weakest and helpless character in the scene, who can’t voice her opinion. When Mr. Perry leaves, she goes near Neil and shows that she agrees with him, by just nodding her head and says,  Go on, get some sleep. as if she is telling Neil to surrender before his father, the way she has given up. She is a helpless mother, who can’t support her son openly and slips into her bed sobbing in dark.

Additionally, in Dead Poet Society, women are viewed as objects whose main purpose is to fulfill men’s sexual desires and fantasies. When Knox first time meets Chris, he falls for her and says, God, I can’t take it anymore! If I don’t have Chris, I’ll kill myself. Thereafter, at the party, when Knox sees Chris, he can’t control his feeling and says to himself, Carpe breasted. Seize the breast. clearly shows his intentions for Chris. Indeed, it is not an expression of love; rather it is more like physical attraction towards Chris. However, by the end, Knox successfully wins Chris, heart, with his romantic poetry. Also, in play young men spent a great deal of time trying to win girls. Apparently, the letter to the principal of Welton Academy by Charlie to convert boys’ school into co-education is the evidence of boys’ craze for girls.

Furthermore, in this play, the relationship of Chet with Chris displays the evolution of the role of women in society. Chris is involved with Chet gets attracted to Knox and in the end, she decides to be with Knox is the interpretation of her bold character. Chet is also a spoilt young man who gets what he desires also flaunts his relationship with Chris, but finally, Knox uses poetry to win Chris heart. This shows a romanticized perspective of relationships and love whereby men pursue women relentlessly (Vannini, 2006).

Gender relations in a patriarchal society are apparent in the play A Midsummer Night’s Dream. For instance, the relationship between Hippolyta and Theseus shows the dynamics of gender relations as men dominate women (Loomba, 2016). This statement “wooed (thee) with my sword” indicates how men use power to control women (Loomba, 2016). For one to be a ruler of Athens, he must be male and old. Although the female characters including Hippolyta exhibit power and strength, they are not able to achieve dominance over men. Males are dominant in Shakespeare’s Midsummer Night’s Dream. Theseus, the character portrayed as the top of the hierarchy in the play, and by association, the most power agrees with the Athenian law of male dominance. Theseus shows pride in taming the female warrior in the battle with the Amazons and marrying her. The king of fairies also expects women to be dominated by men. The argument between Titania and Oberon arises from Titania’s loyalty to her recently deceased friend, in protecting her son. Oberon uses his authority as her husband to force Titania to give up the boy, and he is shocked when she disobeys him and leaves. Oberon refuses to accept defeat and tricks Titania with the magic love potion into giving the boy to him. This shows the need that men have to win over women in order to prove their sense of self. Furthermore, Lysander and Demetrius objectifying of women are more evident. Demetrius had sworn his love to Helena before the play began. Now he hates her and wants to marry Hermia despite Helena’s devotion to him.

In A Midsummer’s Night Dream, male dominancy not only exists between couples but also between father and daughter. As she is mine, I may dispose of her: Which shall be either to this gentleman or to her death, according to our law (5; act 1). A woman’s entire existence is controlled by a powerful male figure, as illustrated by Egeus’ possessiveness toward his daughter Hermia. The men in A Midsummer’s Night Dream are often seen treating women like objects. To you your father should be as a god, Either to die the death or to abjure Forever the society of men (5; act 1).

Marriages play an important role in reinforcing the prevalent gender roles and female subordination. Men make decisions while women are expected to submit to their husbands.

The two works compare when it comes to gender relations. Men are depicted as controlling whereby they make decisions concerning a woman’s life and place in society. The two societies are mainly patriarchal and therefore, men occupy major leadership positions while women perform household works. However, in Dead Poet Society gender relations are gradually evolving as it is set during the feminist era which made significant contributions towards gender equality.

The male and female relationship in Dead Poet Society and A Midsummer Night's Dream. (2019, Nov 25). Retrieved from https://studymoose.com/the-male-and-female-relationship-in-dead-poet-society-and-midsummer-nights-dream-essay 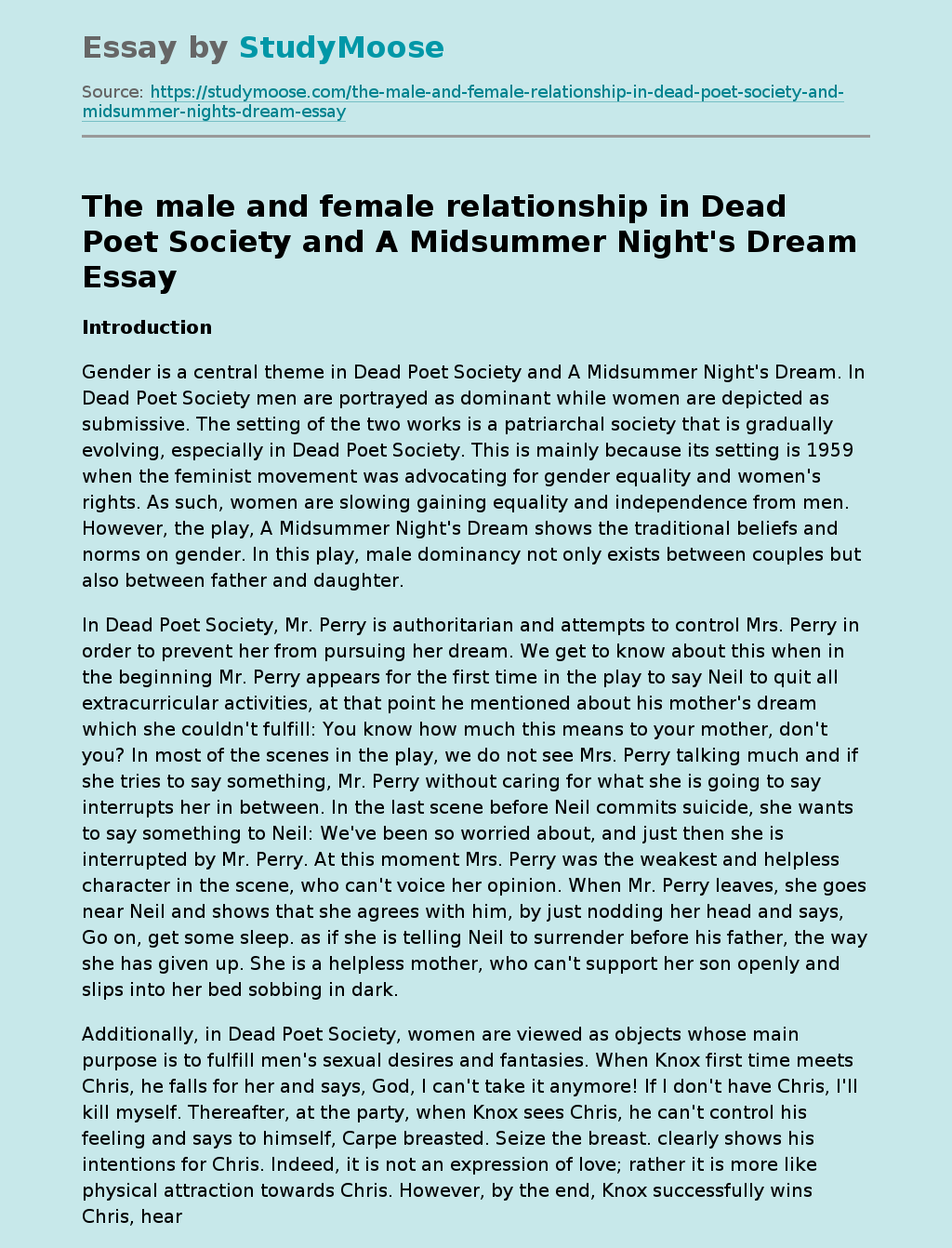