Both the Mexican War and the Spanish War were a result of unfair treatment against weaker nations. The origins of the Mexican War lay with the United States and its expansionistic policies. Most Americans believed they had a divine right to bring their culture among others, because they were superior. This belief was put forth by Manifest Destiny, which had been circulating around the United States for a long time. The ignorance possessed by the Americans show no courtesy toward the Mexicans.

Don't use plagiarized sources. Get your custom essay on
“ Mexican War and the Spanish American War ”
Get custom paper
NEW! smart matching with writer

Under the administration of President Polk, America adopted an aggressive expansion policy that often ignored many inferior countries. In 1492, it was Spain whom sailed across the Ocean and colonized the Amerindian nations of the Western Hemisphere. At its greatest extent, the empire that resulted from this exploration extended from Virginia on the eastern coast of the United States south to Tierra del Fuego at the tip of South America excluding Brazil and westward to California and Alaska.

The ambitious United States paid no attention to Spain and aggressively sought more territory and influence in Cuba, the Philippines, and Puerto Rico.

The war started when the United States declared war on Spain after the sinking of an American vessel (Battleship Main) in Havana harbor on February 15, 1898. They war ended on December 10, 1898 after the unfair Treaty of Paris, in which Spain lost all of its overseas possessions including Cuba, Puerto Rico, the Philippine Islands, Guam, and many others. Both the Mexican War and the Spanish American War were a direct result in the abusive ways of superior power and influence.

Manifest Destiny was more encouraged when Polk became President. He was elected president because of his strong support in bringing Oregon and Texas into the Union. President Polk was clearly the antagonist when he sent troops under General Zachary Taylor into land that Mexico held sovereignty, sparking a war. Polk now drafted a message to Congress: Mexico had “passed the boundary of the United States, had invaded our territory and shed American blood on American soil.” Whether the Mexicans had fired the first shot or the Americans, whether the armies were on Mexican territory or American territory, Polk got his war. Despite the plea of innocence, Mexico cannot escape blame for the war. Mexico never had a strong centralized government to negotiate with a foreign state.

Mexico was never even successful in governing themselves for the time being. Mexico was on the verge of bankruptcy and their army was inadequately trained and equipped. The country was awash with political turmoil throughout the war, indeed, throughout the century, making it near impossible for them to ever conduct a sound defense of the country. Nevertheless, the United States, as a superior nation under Polk’s Presidency assumed an aggressive war like attitude toward Mexico without consideration of the Mexican stance.

The conflict between the Spanish and Americans grew dramatically when General Valeriano Weyler began implementing a policy of Reconcentration that moved the population into central locations guarded by Spanish troops and placed the entire country of Cuba under martial law in February 1896. The American government was once again looking to exploit their defenseless neighbors and gain more influence in the countries. The main targets were Cuba, Puerto Rico, and the Philippines. Cuba was the first to initiate its own struggle for independence from Spain. America, being the closest superior power intervened in Cuba’s affairs.

The Philippines were also growing intolerable to Spanish rule, and the United States took interest in the Philippines. Following its declaration of war against Spain issued on April 25, 1898, the United States added the Teller Amendment asserting that it would not attempt to exercise hegemony over Cuba. Under Commodore George Dewy at the Battle of Manila Bay on May 1st, the Spanish fleet under Rear Admiral Patricio Montojo was destroyed. The most disrespect followed the signing of the Treaty of Paris when Spain lost all of its overseas possessions.

The superior powers, such as the United States, are always looking to profit themselves. During the Mexican war and the Spanish-American War, the dominance and ethnocentric ideals that America held flourished in many un-called-for, disrespectful disputes. The aggressive stance the troops held under Zachary Taylor under the orders of President Polk did not give room for negotiation. If the United States did not get what they wanted, they would insist by force, not by allowing the inferior nation in their eyes to make suggestions that regard their country and dignity. Both the Mexican War and the Spanish-American War resulted because of the unfair and unjust treatment that the United States held in their so-called foreign policy.

A People A Nation 6th Edition 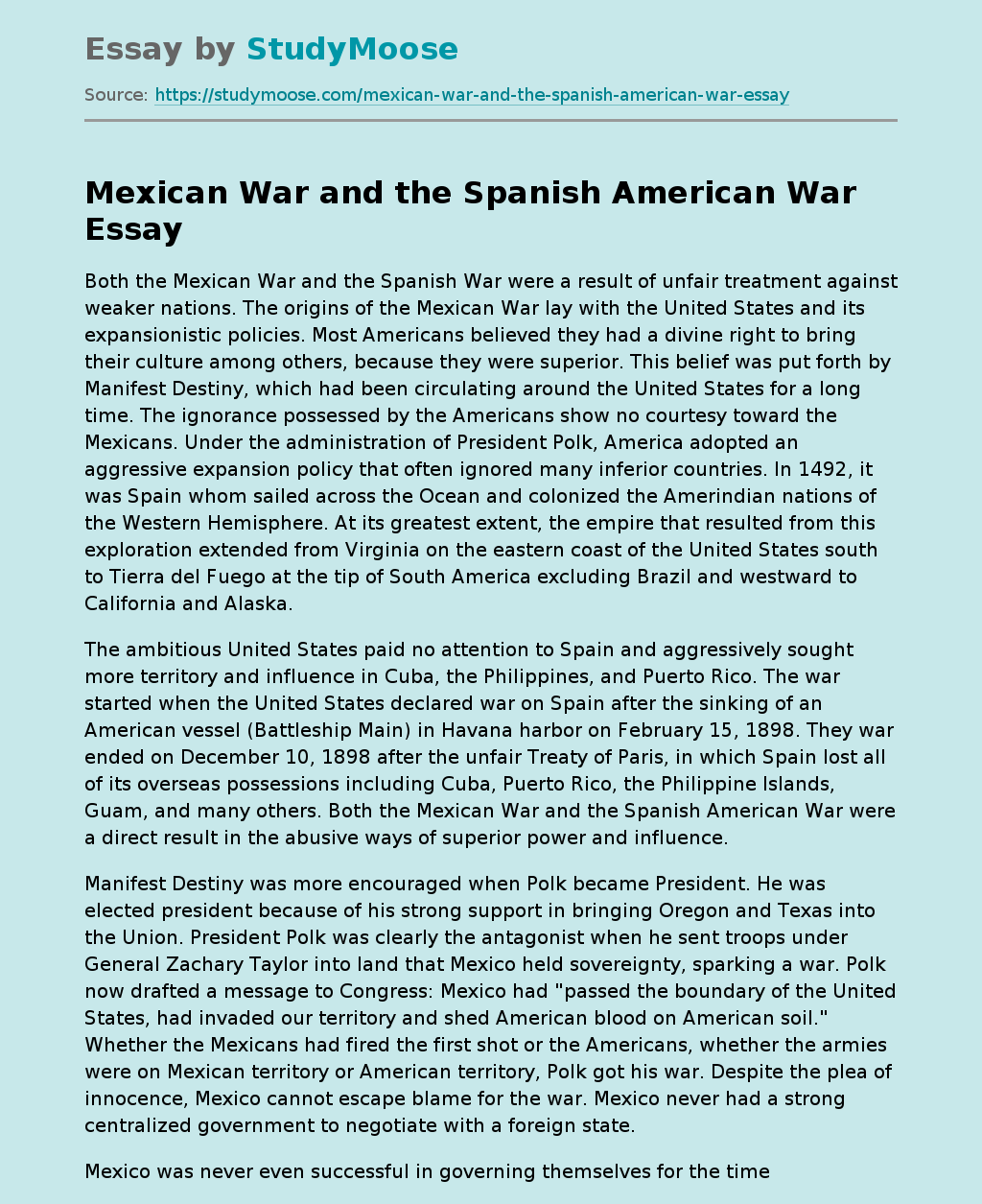