Double Standard in Marquez' Chronicle of a Death Foretold

In Columbian society portrayed in the novel Chronicles of a Death Foretold by Gabriel Marquez, there is a significant double standard regarding gender roles. They live in a world where women have to adhere to extreme societal and cultural expectations. Men are encouraged to be experienced in the bedroom for their wedding night but if a woman is not a virgin, she is deemed unfit to marry. Women cannot move up in the social world if they are not married. They are taught to cook and clean and if they wish to move up in class they must marry a man of higher social standards.

Turn in your highest-quality paper
Get a qualified writer to help you with
“ Double Standard in Marquez’ Chronicle of a Death Foretold ”
Get high-quality paper
NEW! AI matching with writers

Women are taught when they are brought up that “love can be learned” (page 35) and that they must marry whoever impresses their family while men can choose whoever they want. If Angela does not follow these rules she will be an outcast from society and will never have the hopes of moving up in class. When she doesn’t adhere to the image of a “perfect women” Santiago Nasar is killed in the name of her honour.

The result of these double standards leads directly to the death of Santiago Nasar in Chronicles of A Death Foretold.

The idea that for women, love is something that can be taught and they are “brought up to suffer” while men can choose whomever they would like especially if they charm their family is a significant unjust double standard that results in the death of Santiago Nasar. Santiago was murdered for supposedly taking Angela’s virginity.

This was cause for his death because not being a virgin deemed you unfit to be married and soiled or impure, she was garbage if she wasn’t a virgin.

When Angela’s future husband found out she wasn’t a virgin he returned her to her family, honour destroyed. Her two brothers took action into their own hands and when Santiago was named as the man who took her virginity he was murdered by the Vicario twins. This is effect of the double standard because Angela did not want to marry Bayardo San Roman but he had charmed his way in by impressing her family. “Bayardo San Roman hadn’t even tried to court her but had bewitched her family with his charm. ” (Page 34).

If women had the power to choose who they wanted to marry, as men do, Angela never would have been pressured into marrying Bayardo. She did not love him. “Angela Vicario only hinted at the inconvenience of a lack of love, but her mother demolished it with a single phrase: Love can be learned too. ” (Page 35) If Angela was never going to marry Bayardo he would not have returned her for not being a virgin and she would not have named Santiago as the man who took her virginity and the twins never would have taken the matter into their own hands and committed the murder.

If the double standard didn’t exist in their culture Angela would have had the power to say she did not want to marry Bayardo and Santiago would still be alive. Another sexist double standard that exists in the community is the idea that the only way women can make a life for themselves is if they get married. It is impossible for them to move up in class unless they marry a man who has a higher social standing than they do, while men only need to be born into positive circumstances. The perfect woman would be one who could cook, clean and be a mother.

She would have to be pure (stay a virgin till her wedding night) and obey what her husband says. Angela says,”The brothers were brought up to be men. The girls were brought up to be married. They knew how to do screen embroidery, sew by machine, weave bone lace, wash and iron, make artificial flowers and fancy candy, and write engagement announcements… my mother thought there were no better-reared daughters. ‘They’re perfect,’ she was frequently heard to say. ‘Any man will be happy with them because they’ve been raised to suffer. (Page 34). The perfect man is one who has experience in the bedroom, looks, money and has fulfilled societal expectations. The stress on women to get married in order to succeed in the society is very strong. If women had the same expectations as men being married would not be as much of an obligation. If they had a chance to succeed on their own finding a man to marry would not be a priority. This double standard leads to Santiago’s death because of the pressure to be the perfect woman in order to get married and advance in life.

If there was no such double standard they would have never been married and Santiago would have not been murdered by Angela’s brothers. The final double standard in Chronicles of a Death Foretold the lack of experience women are expected to have in the bedroom versus the amount men are expected to have. In their society women must be pure and have their virginity until the night of their wedding. “No one would have thought, nor did anyone say, that Angela Vicario wasn’t a virgin.

She hadn’t known any previous fiance and she’d grown up along with her sisters under the rigor of a mother of iron. Even when it was less than two months before she would be married, Pura Vicario wouldn’t let her go out alone with Bayardo San Roman to see the house where they were going to live, but she and the blind father accompanied her to watch over her honour. ” (Page 37). The idea of the importance of virginity is almost being mocked by Marquez, it is so important to protect her virginity that her blind father must accompany her and “watch over her” is absurd.

Women must have chaperones at all time while men are encouraged to be experienced. The reason Santiago Nasar is killed was to avenge Angela’s honour when she accuses Santiago for taking her virginity after she is deemed unfit to marry by her fiance. If this one sided prejudice did not exist and it was not a necessity for Angela to be a virgin (as it is not necessary for the man to be a virgin) Angela would not have been returned and need her honour to be avenged. The double standard in this novel is clearly unjust and absurd.

Women are pressured into being married to people who they do not love in order to move up in the social classes. Instead of being courted, the man impresses the woman’s family and the woman is taught they must learn to love and grow up to suffer. The idea of virginity is extremely one sided as women need to be virgins and men need to be experienced. If any of these double standards regarding sexuality did not exist in their culture Santiago Nasar would not have been murdered.

Double Standard in Marquez' Chronicle of a Death Foretold. (2016, Oct 30). Retrieved from http://studymoose.com/double-standard-in-marquez-chronicle-of-a-death-foretold-essay 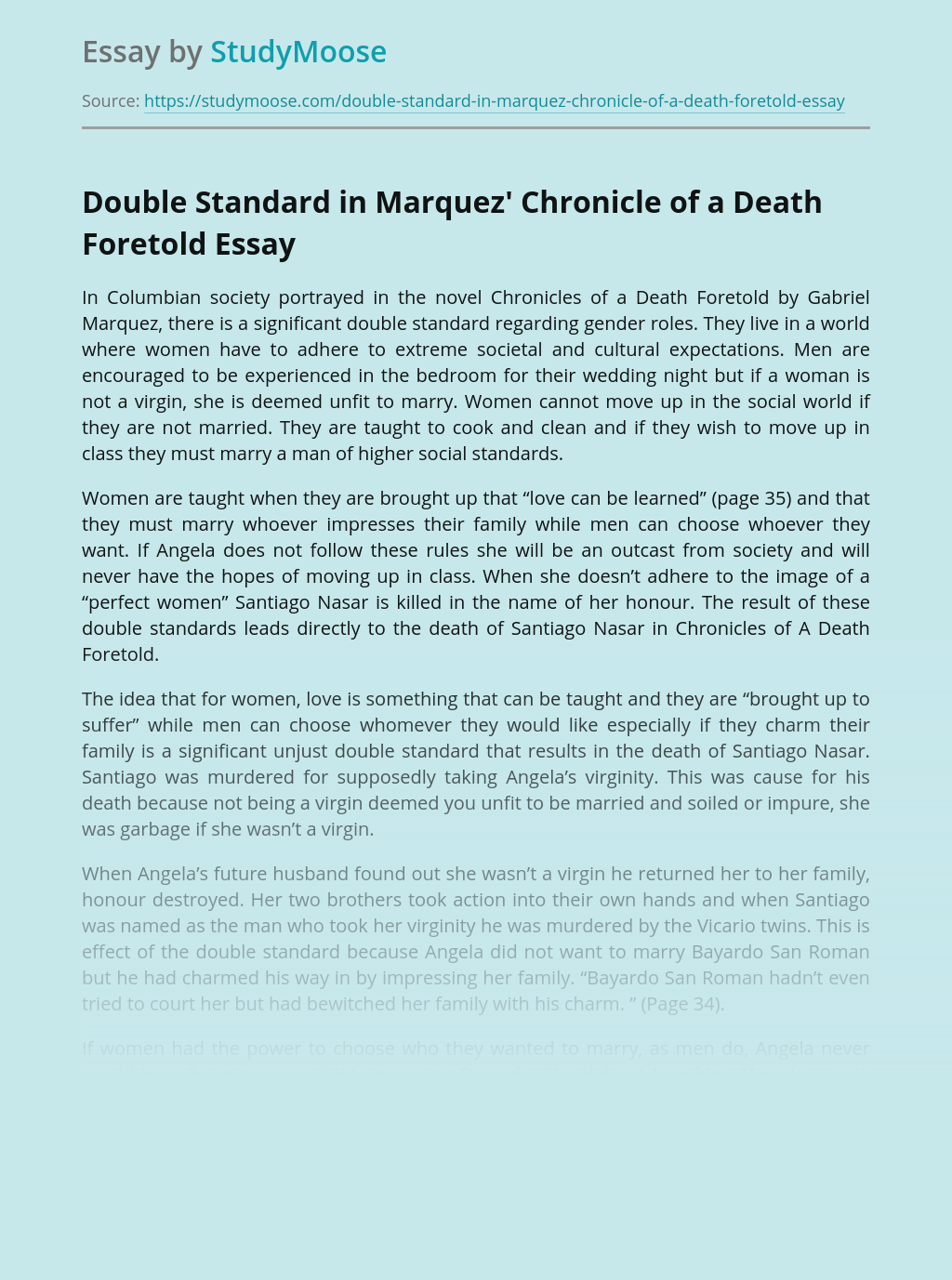 Turn in your highest-quality paper
Get a qualified writer to help you with
“ Double Standard in Marquez’ Chronicle of a Death Foretold ”
Get high-quality paper
Helping students since 2015
Stay Safe, Stay Original