What does it mean to be human? Are we animals? Or are we something different? “Animals Like Us” by Hal Herzog talks about the relationship between human and animals. The article inspired me to think about what is it that makes us human. I believe humans are similar to animals in many ways, but also unique because of the complex decisions humans could make. as discussed in Herzog’s article about the many contradicting relationships humans have with animals. Interestingly, human have a lot of similarities with animals.

Don't use plagiarized sources.
Get Your Custom Essay on Men and Animals Just from $13,9/Page

For example, human and animal are mammals in which both give birth instead of lay eggs like reptile. Also, we would raise our children rather than abandon and let them live on their own. Animal and human both eat vegetable and meat, meaning we have similar lifestyle; Hal Herzog mentioned that cat eat flesh for living, as humans would also eat flesh to live. However, human are also different from animals in particular that human have higher intelligence than animals.

For example, human will educate the next generation not only about survival skills but also the way of life. Human brain also operate in two main parts, one is the logical part and the other one is the emotional part. Animals may also have emotional part but their logical part is not as developed as us, so human may raise moral and ethical questions. In this article, Mr. Herzog noticed that he once painted himself into a moral paradox that feeding his boa constrictors rodents are more morally preferable and permissible than feeding the bodies of the kittens to it. Ultimately, in the animal world, the more important question in their mind is whether they got sufficient quantity of food rather than what kind of meat would be permissible. After comparing the two, what does it mean to be human then? Hal Herzog gave many examples of what makes human in our relation with animals. Human have a brain, just like all the animals, but what makes us different is we are intellectually able to make “contradicting” judgments and thinking, and on the contrary, animals thinks in black and white. Although our more developed intelligence sometimes make our lives complicated and force us unable make decisions; however, these contradictions distinguish the level of intelligence between animals and us. Therefore, human beings are unique unlike animal because we find contradicting issues and thinking solutions to solve our problems. Our world is not only the clear black and white sides, we always see the world in shades of gray. Both author and I believe that even though there are so many similarities between us and animals, what makes us “human” is our paradoxical relationship with them, for example, we love them, but we also eat them. It is difficult to clearly delimit our relationship with animals because of the gray side between emotional and logical parts. 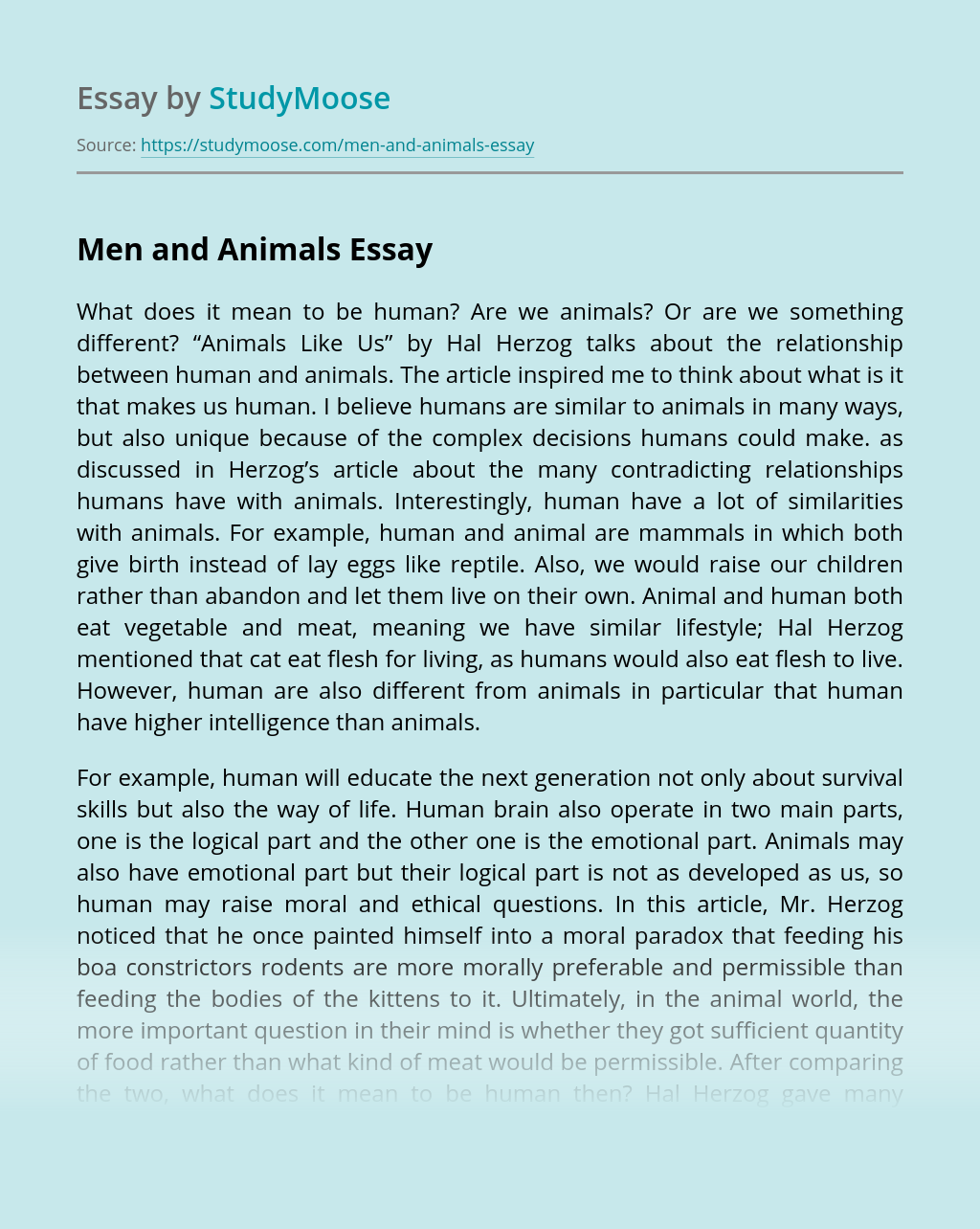 In Alan Lightman’s Progress; the writer believes that the general idea about advancement in technology being the measuring scale for society’s progress is a logical fallacy; the two ideas mentioned in this paragraph state Lightman’s self contradictory, yet relative and valid points. In the fourth paragraph Lightman states, “If progress is human happiness, has anyone...

What does it mean to be human? Are we animals? Or are we something different? “Animals Like Us” by Hal Herzog talks about the relationship between human and animals. The article inspired me to think about what is it that makes us human. I believe humans are similar to animals in many ways, but also...

Part A: Twain’s Family Tree Use all the skills you have learned throughout this course to complete a close reading of the description you’ve chosen. Use context clues to make sense of things that are not clear at first. Pay attention to Twain’s tone and the humor devices he uses. 1. Which of Twain’s ancestors...