After looking over the material regarding Centagenetix, I have a recommendation as to whether or not MPM should invest in Centagenetix. I realize that we have spent a great deal of time and resources on this project already, and that Harvard Medical School is anticipating that this deal will go forward. I also realize that backing out of the deal now could reflect badly upon MPM and upon you, but my recommendation is that MPM invest in Centagenetix at this point.

Don't use plagiarized sources. Get your custom essay on
“ Memo – Investment Recommendation for Centagenetix ”
Get custom paper
NEW! smart matching with writer

The main reason is that if Centagenetix is actually able to create a product to increase human longevity, there are some major questions and concerns about first getting this product to market, as well as what conditions this product might carry for measurable efficacy and if the market will be willing to accept them. I will discuss other considerations shortly but I think that is itself a potential deal-breaker. Let us first consider the New England Centenarian Study (NECS). While it is a worthwhile and interesting study, with good correlations between family members and a sample pool large enough to provide preliminary findings, it still has some weaknesses.

The two major ones being how geographically centric it is and the size of it. Scientists who study aging have long argued that environment and lifestyle play the largest role in longevity, but Centagenetix is setting out to see if that is incorrect: if there is in fact a heritable gene (or genes) for longevity. It would seem that in order to provide a strong argument that the study reaches beyond environment, there should be more samples from areas beyond the eight towns around Boston that the NECS used.

It could also be a problem that the majority of the centenarians used had no history of smoking or obesity and were generally small in stature. Granted that using these samples, they found a linkage on chromosome 4, but this does not seem to match the homologous zones for longevity in the previously studied model organisms.

There are possible correlations on other chromosomes that track with those model organisms, but the patent that they filed is for the 10 million base pair region on chromosome 4. I am also concerned that the first attempt to scale the study to a larger population resulted in a noteworthy decrease of the linkage’s strength. Scaling it up further restored the statistical strength of the linkage, but the overall strength and valuation of the IP remains in question. We also need to consider the possibility that this 10M bp region will contain genes that other groups are already studying and that the patent is not strong enough to survive a challenge. It is possible that these longevity genes will be related to insulin receptors or free radical management: two areas that several groups or companies are already studying. How strong will the IP remain when there is competition for these hypothetical genes? If that is the case, the company’s major resource will be its SNP database of centenarians, which will cost at least another $10 million to get to a functional state, plus more money to expand and maintain it. I have not seen any market analysis as to how much companies will pay for access to such a database. While Millennium has a somewhat similar model, they are much more pro-active in what they offer their clients, and that is what arguably drives their profits. The database will be valuable, but just how valuable is an important question. We need to know what the likelihood is that building such a SNP database will turn a profit, who specifically would be interested in paying for its use, and how much they would pay. In addition, would Centagenetix receive any royalties or payments for products based off findings from that SNP database? These are important considerations, especially if the possibility exists that the SNP database will have to support the company for any protracted amount of time. There remains a conflict-of-interest issue with Tom Perls and Harvard. If he can be enticed away from Harvard, the study that the company is based on will potentially no longer be available. Perls will be a key founding member of Centagenetix, and is expected be motivated and incentivized to work hard. Without a stake in the company, it remains unclear if that will happen. We also need to consider that if Perls does leave Harvard, will BIDMC still allow Centagenetix the use of the NECS, or should we re-consider the proposal from Whitehead to buy them out? The value of the IP revolves strongly around the NECS and Dr. Perls’ work.

There needs to be a much clearer sense as to if or how these issues will be resolved, or else MPM might own a major stake in a company that will require a much larger investment to restore the IP we have assumed they already have. Finally, I want to return to my main point: Aside from a SNP database, what is at the end of the Centagenetix pipeline? Let us assume that they do find a gene or several genes that directly relate to longevity and are not in conflict with another group or company, that they can find the function of these genes, and eventually develop a product built on that discovery. Presumably, the function of this product would be to increase longevity in humans. How would they run clinical trials for this, and how long would they take? If the measure of success is how long someone lives, might not the trials take far longer than is feasible for us to provide funding? Assume that they get past pre-clinical trials; will the FDA even allow such a product to be tested? I think that we need to know more about how the FDA would approach such a product, as it seems like the regulatory hurdles for this will not be what most pharmaceutical companies are accustomed to. They are not trying to treat or effect a disease state, but rather to increase longevity. Granted that Ponce de León spent much of his life searching Florida for the Fountain of Youth, and that a product like this will appeal to the general public, there is likely to be some serious regulatory and clinical trial hurdles to get it there. We also need to consider how the medical community and public will react to such a product. It seems likely that, given how many of the subjects from the NECS lived relatively healthy lives, the product will have some stipulations about health for maximum efficacy. If the public is required to not smoke, or be obese before this product will work for them then that will significantly affect adoption. In addition, how would the medical community respond to something with claims of increasing longevity?

I think it would be highly skeptical and cynical. There will be difficulty in both convincing doctors to prescribe it, as well as getting payers to compensate for it. This will presumably be a product that patients will take for the rest of their lives, meaning there will likely be a struggle for both adoption and compliance. The only real gauge of such a product will be how long someone lives, and it will be challenging to demonstrate proof that any increase in longevity is a direct result of Centagenetix’s product. Significant market research needs to be done that considers the varying scenarios for adoption and lifestyle changes, to see if the market size is as big as one would expect it to be. In closing, I acknowledge that other products may come out of Centagenetix that are related to actual disease states or physiological processes. It is possible that they will develop an impressive and profitable drug that is related to the longevity of the patients of the NECS and beyond. Heck, they may even discover the cure for cancer. Even so, there are far too many unknowns and uncertainties in this proposal. The strength of the IP is in question. The availability of the NECS and even Dr. Perl is uncertain. What an end product looks like and what sort of market exists for it. How much more money it will take if they need to build a SNP database to remain in business, or if they have to do another NECS-like study of their own. The risks and uncertainties are sizeable, and the question about actual market size is significant. I do not think that MPM should invest in Centagenetix at this point. 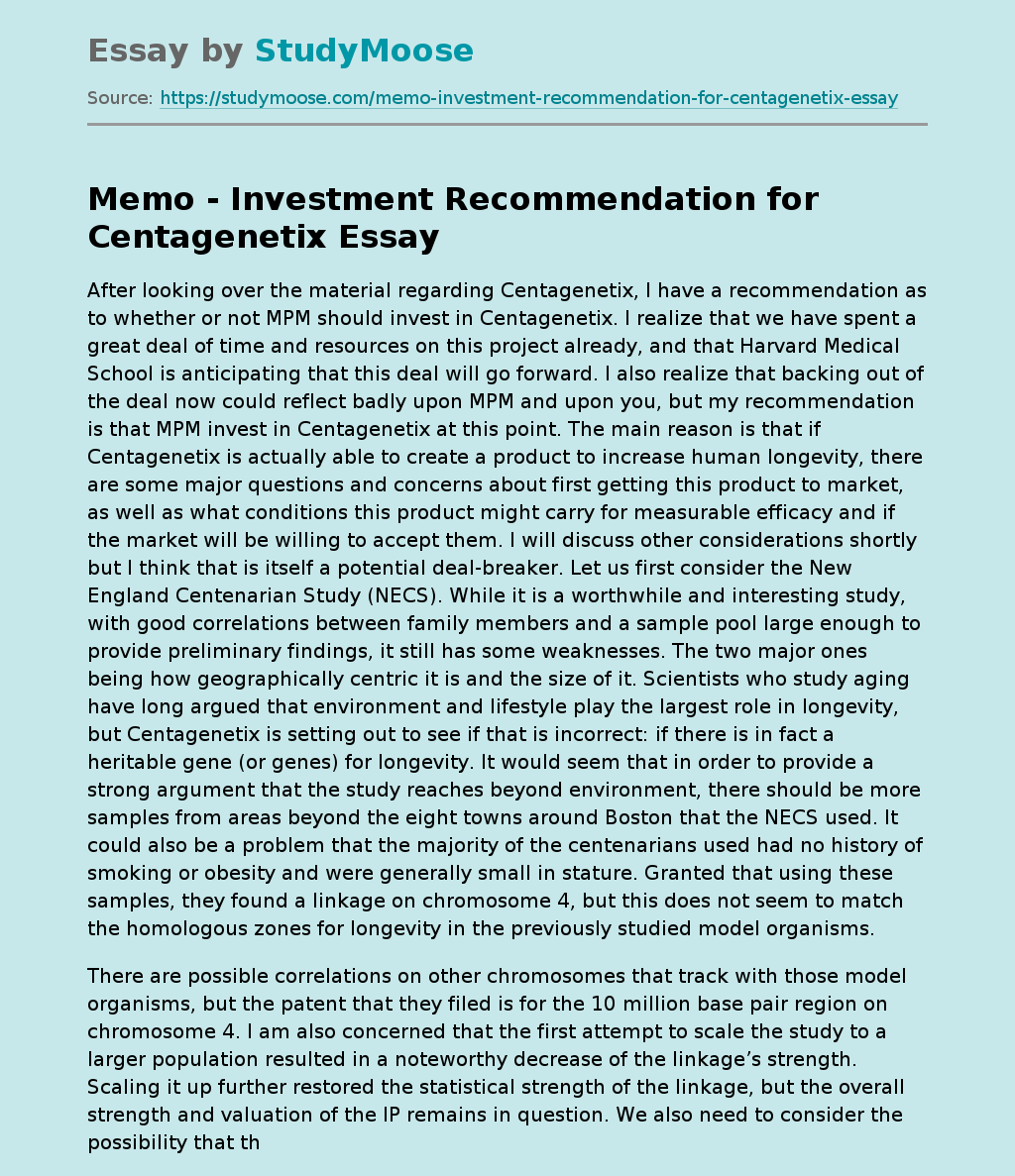