Case Memo as a hired consultant

The case study to be analyzed, The Case of Plant Relocation, is attached.

By completing this assignment, students will meet the outcome(s):

identify ethical issues that arise in domestic and global business environments using an understanding of ethical concepts and of legal and business principles; develop and evaluate alternatives to, and recommend solutions for, ethical dilemmas, taking into account ethical and legal requirements and the essential mission of the business enterprise effectively communicate to internal and external business stakeholders the complexities of ethical issues, suggesting and analyzing various solutions in order to ensure appropriate business practices and accountability Requirements of Case Memo #2:

Draft memo using the prescribe format (subheadings/sections) prescribed below; All sections must be comprehensive, in-depth and fully justified; Resources from previously assigned course materials or from your own research may be used to justify and support rationale; All in-text citations and resources must be in APA style;

Submit the completed case in the Assignment Folder.

Don't use plagiarized sources. Get your custom essay on
“ Case Memo as a hired consultant ”
Get custom paper
NEW! smart matching with writer

Include all the following subheadings/sections in the memo:

FACTS SUMMARY: Summarize and explain the facts that are directly significant and relevant to the ethical dilemma in this case.

ETHICAL ISSUES: Discuss two (2) of the most significant ethical issues related to, and arising from, the ethical dilemma and then, explain each ethical issue and why it is an ethical/moral issue, etc.

ALTERNATIVES: List, explain and justify one (1) possible alternative/solution for EACH ethical issue to address and resolve the ethical dilemma and each ethical issue discussed above.

Alternatives are expressed in the form of propositions or prescriptive statements suggesting action and are framed by asking the normative question, what could or should the company do? Consider consequences. Identify relevant stakeholders and the effects on them, pros and cons, etc. of each alternative. Apply ethical theories in context of your evaluations, but don’t over-do this aspect. For example, teleological or consequentialist theorists would examine who the stakeholders are, both internal and external to the company, and the positive and negative consequences for each group, etc.

RECOMMENDATION: Recommend one and only one (1) alternative from the two (2) alternatives suggested above. Justify and explain your choice discussing:

FUTURE IMPLICATIONS for RECOMMENDATION: Discuss potential implications arising from your recommendation for:

the company
other businesses within the industry
other industries
CONCLUSION: Summarize the case and its ethical issues, implications, etc.

The Case of the Plant Relocation

You are the chief executive of Electrocorp, an electronics company, which makes the onboard computer components for automobiles. In your production plants, complex hydrocarbon solvents are used to clean the chips and other parts that go into the computer components. Some of the solvents used are carcinogens and must be handled with extreme care. Until recently, all of your production plants were located in the United States. However, the cost of production has risen, causing profits to decline.

A number of factors have increased production costs. First, the union representing the workers in your plant waged a successful strike resulting in increased salary and benefits. The pay and benefits package for beginning employees is around $15/hour. A second factor has been stringent safety regulations. These safety procedures, which apply inside the plant, have been expensive in both time and money. Finally, environmental regulations
have made Electrocorp’s operations more costly. Electrocorp is required to put its waste through an expensive process before depositing it at a special disposal facility.

Shareholders have been complaining to you about the declining fortunes of the company. Many of Electrocorp’s competitors have moved their operations to less-developed countries, where their operating costs are less than in the United States, and you have begun to consider whether to relocate a number of plants to offshore sites. Electrocorp is a major employer in each of the U.S. cities where it is located, and you know that a plant closure will cause economic dislocation in these communities. You know that the employees who will be laid off because of plant closures will have difficulty finding equivalent positions and that increased unemployment, with its attendant social costs, will result. However, you are aware of many other corporations, including your competitors, that have shut down their U.S. operations, and it is something that you are willing to consider.

You have hired a consultant, Martha Smith, to investigate the sites for possible plant relocation. Ms. Smith has years of experience working with companies that have moved their operations to less-developed countries to reduce their operating costs. Based on your own research, you have asked Ms. Smith to more fully investigate the possibility of operations in Mexico, the Philippines, and South Africa. A summary of her report and recommendation for each country follows:

A number of border cities in Mexico would be cost-efficient relocation sites based on labor and health and safety/environmental factors. Workers in production plants comparable to Electrocorp’s earn about $3 per day, which is the prevailing wage. There is frequent worker turnover because employees complain that they cannot live on $3/day, and they head north to work illegally in the United States. However, a ready supply of workers takes their place.

Mexican health and environmental laws are also favorable to production. Exposure to toxic chemicals in the workplace is permitted at higher levels than in the United States, allowing corporations to dispense to some degree with costly procedures and equipment. Mexico’s environmental laws are less strict than those of the United States, and a solvent recovery system, used to reduce the toxicity of the waste before dumping, is not required.

The only identifiable business risk is possible bad publicity. The rate of birth defects has been high in many Mexican border towns where similar plants are in operation. Citizen health groups have begun protests, accusing the companies of contamination leading to illness.

Conditions in the Philippines are more favorable than those in Mexico in terms of labor and health and safety/environmental factors.

The prevailing wage in the Philippines is about $1/day, and young workers (under 16) may be paid even less. As in Mexico, the workers complain that the rate of pay is not a living wage, but it is the present market rate.

The health and safety and environmental regulations are equivalent to those in Mexico, but there have been no public complaints or opposition regarding birth defects, cancers, or other illnesses.

Conditions in South Africa are positive in some respects, but not as favorable in economic terms as in Mexico or the Philippines. The prevailing wage in South Africa is about $10/day. Furthermore, there is a strong union movement, meaning that there may be future demands for increases in wages and benefits.

The unions and the government have been working together on health and safety issues and environmental protections. Exposure to toxic chemicals in the workplace is not permitted at as high a level as in Mexico and the Philippines. Although the equipment necessary to reduce toxic chemicals to an acceptable level is not as costly as in the United States, this expense would not be incurred in the other two countries. Furthermore, there are requirements for a solvent recovery system, which also increases operation expenses.

You have to decide how you would like to proceed. Your options are to select an overseas site for relocation or to simply continue all operations within the United States.

Case Memo as a hired consultant. (2016, Mar 06). Retrieved from http://studymoose.com/case-memo-as-a-hired-consultant-essay 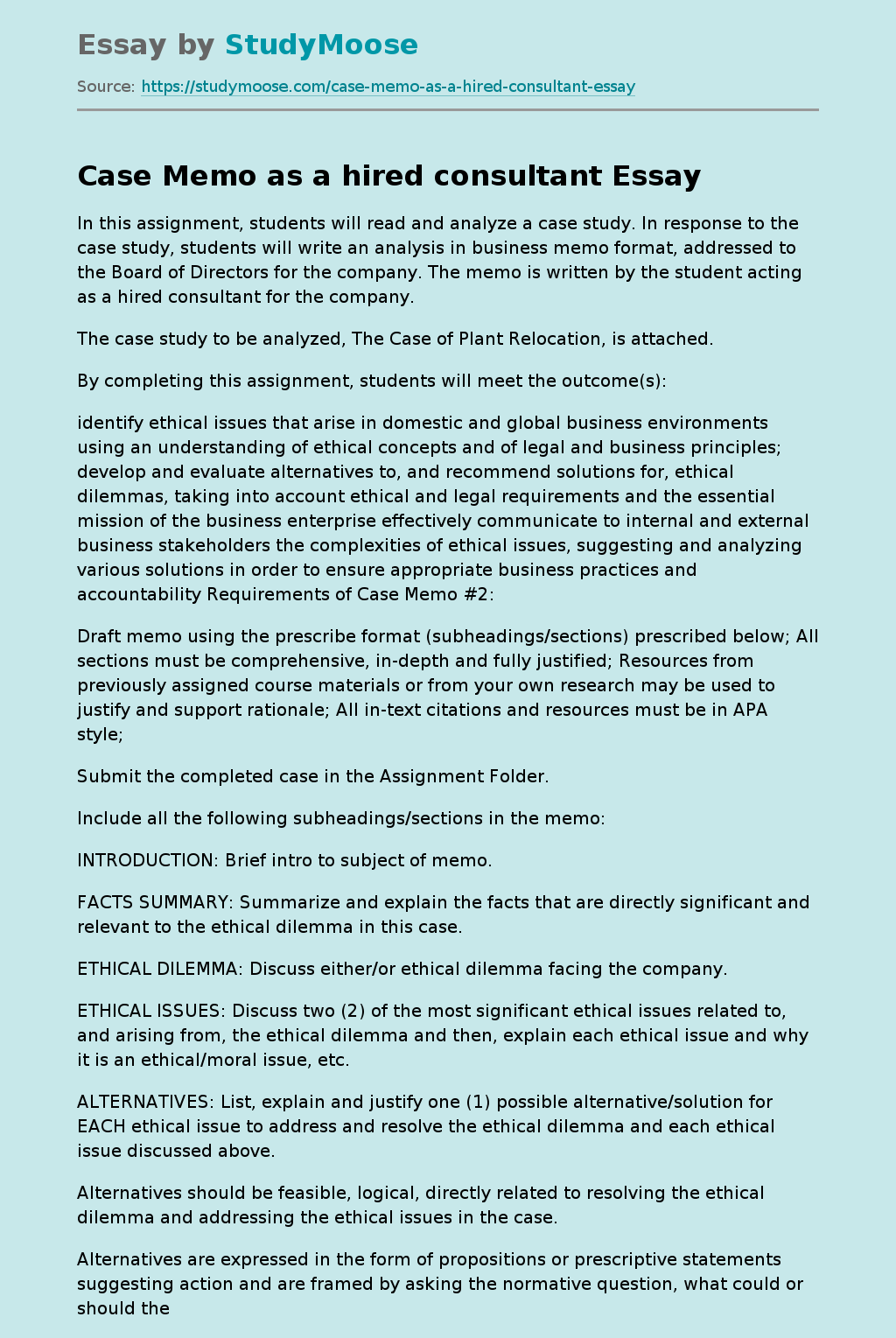