Before Martin Luther King Jr. and Malcolm X became the faces of the modern day Civil rights movement. Booker T Washington and W. E. B DuBois were the first widely and socially accepted Black intellectuals/activists. These two men help create not only progressive dialogue to help propel change within America and in the African American community. They also built institutions that gave opportunity and structure to a struggling race searching for an identity within an unwelcoming society. Their classic disagreements throughout the early 20th century were a major catalyst in the ascension of our people after the reconstruction era.

Washington and DuBois help create the foundation for African- Americans that they were looking for once they were emancipated. Black people had no idea where to start once they were told they weren’t slaves anymore. Even with plans implemented in 1865 by the government like the Freedman’s Bureau and Land redistribution. It only keep black people in the cycle of harsh labor/ farm work and gave them limited resources to help ease into the transition from slave to citizen.

Like most slaves, Washington had move north in order to escape that cycle. Washington was only nine years old when he was emancipated and moved to West Virginia.

Born a slave, Washington could not read and only learned when he moved north. In his book, An Autobiography: The story of My Life and Work, Washington said he learn how to read by watching how the letters were placed on the salt barrels in the coal mine he worked at.

Washington went from being self taught to going to school part-time. Washington also recounts the brutal realities of slave life. These horrific accounts would later on shape his ideals and way of life. Washington would go on to graduate from Hampton Institute in 1875 and then founded Tuskegee University in 1881. Washington philosophy was that black people should educate themselves, work hard to be ‘just as good as’ white people but not challenge their authority and deal with discrimination. Washington felt that by doing this we would gain the approval of white people and then become their equals. The only thing Washington knew was obedience and that slave mentality spilled over into his rhetoric. Washington made these ideals clear in his famous speech known as the Atlanta Comprise in 1895.

Around that same time, W.E.B DuBois was making a name for himself with his work in sociology. Du Bois was working on a case study around the time Washington gave his Atlanta Comprise speech. It was the first case study done on an African-American community entitled The Philadelphia Negro: A Social Study (1899). DuBois took the time to experience the essence of Black culture. A component he knew was vividly missing from Washington ideologies. DuBois understood that it was deeper than slavery. That’s because DuBois was ‘The Dream’ that Washington spoke of and DuBois knew as a race we deserve and are way more than Washington’s philosophy.

William Edward Burghardt Du Bois was born free and of mixed race in Massachusetts. Du Bois was raised in a racially tolerant community and went to school with white children and teachers but still dealt with racism because he was a ‘mulatto’. DuBois was always smart and everyone knew it. So he knew first hand that even if you were educated, well manner, and well dressed in an integrated society. Even with all those attributes going for him he was still not accepted by white people. DuBois applaud Washington for his efforts in education but always was critical when it came to his approach to race relation. In his book, The Souls of Black Folk, DuBois assess the progression of the African- American race and also points out how Washington’s ideals are counterproductive and complacent. This started a feud of ‘who knows what’s best for our people’.

I believe this feud did more for W.E.B. DuBois than Booker T. Washington. Washington keep pushing education and raising money for new and old institutions that he had involvement with. DuBois created the National Association for the Advancement of Colored People (NAACP) along with other civil right activists in 1910. NAACP stemmed from the Niagara Movement, which was a conference held by activists that opposed Booker T. Washington’s movement. W.E. B DuBois held the position of Director of Publicity and Research as well as editor of its magazine The Crisis. As editor DuBois wrote a lot of pieces for the magazine that made him a permanent voice among the African-American community for more than 20 years.

Even till this day we must credit Booker T. Washington and W.E.B DuBois for the ground work they laid for African-Americans in education. W.E.B DuBois just became the civil rights giant that Booker T. Washington wasn’t and could never be. Washington up bringing as a slave hinder him from seeing that submission is still oppression. He knew what it was like to be physically enslaved. DuBois knew what it was like to be oppressed because of your skin color. DuBois knew what was in store for African-Americans for years to come. This is why DuBois is more prevalent today than Washington. We can still apply DuBois words to present day events and their as relevant today as they were then. 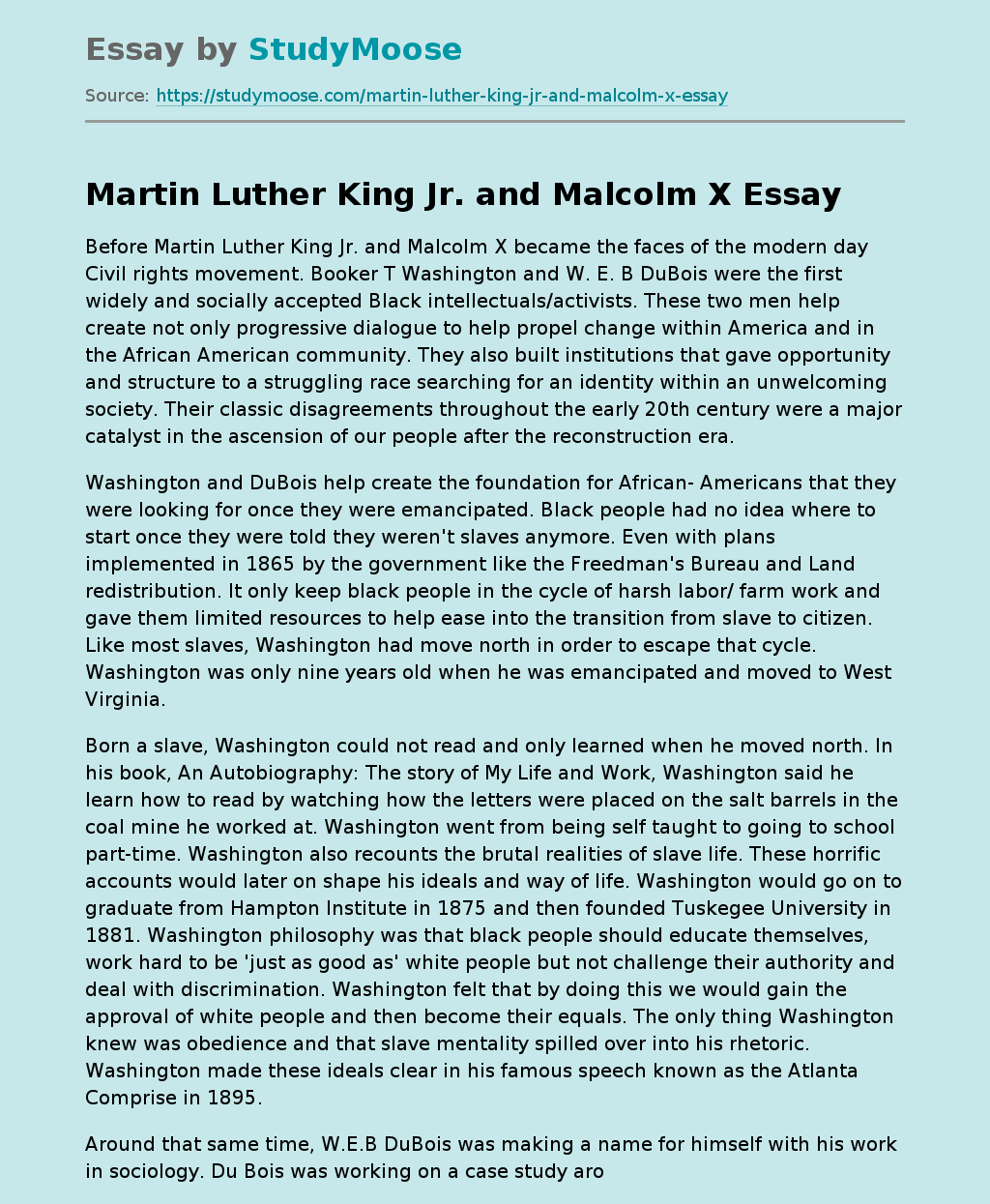