Topic Sentence: Like alcohol in the 1920s, marijuana should be legalized because doing so would not only reduce crime, but make the substance more reliable and safer and would generate tax dollars.

Why is marijuana illegal? Why is it legal in some states and not in others? Marijuana became widely criminalized in 1937 when congress passed the “Marijuana Tax Act” 1 as a result of a national propaganda campaign against the substance. Harry J. Anslinger 1 led the campaign as the first commissioner of the Federal Bureau of Narcotics from 1930 to 1962.

He used the themes of racism and violence to cause widespread hatred and fear of the drug in order to make it illegal. He was often quoted saying “Colored students at the Univ. of Minn. partying with (white) female students, smoking [marijuana] and getting their sympathy with stories of racial persecution. Result: pregnancy” and “Two Negros took a girl fourteen years old and kept her for two days under the influence of hemp.

Upon recovery she was found to be suffering from syphilis.” 2 In 1996, Proposition 215 was passed in California and this allowed for the medical use of marijuana. Since then, 22 other states, D.C, and Guam have enacted similar laws. These laws have now decriminalized possession and/or legalized medical marijuana in the state.

1 How is it similar to the prohibition era before and after?

In contrast, the ban on alcohol was created as a result of legislators claiming that the grains needed to distill alcohol were needed for food as the country was at war. Then in December of 1917, the US congress enacted a permanent ban on the sale, transportation, importation, and exportation of alcoholic beverages. Similarly to supporters of marijuana prohibition, supporters of alcohol prohibition claimed that as a result, the nation would become an overall healthier country and that crime rates would fall. In addition, the average worker’s productivity was supposed to increase, leading to greater economic prosperity for the US as a whole.

However, none of these claims came true. Instead of promoting the nation’s health, the new alcohol made illegally was far worse for people and was often much higher in alcohol content. In addition, crime increased since illegal activity was required to make and distribute the newly illegal drug. Criminal activity then became organized as the benefit for large criminal enterprises to murder people and bribe public officials and law enforcement officers to move the bootleg brew became too tempting. Worker productivity failed to increase and jails quickly filled with people convicted of minor violations of the ban, which cost millions to enforce. In 1933, the prohibition of alcohol ended, causing a reduction in crime and creating many new jobs in the expanding liquor industry.

Although the Food and Drug administration have not supported the legalization for medical marijuana, doctors and researchers have found that the use of marijuana provides relief for many medical conditions and illnesses. According to the American cancer Society the use of smoked marijuana is not considered medicine (“The FDA’s Opposition to Medical Marijuana Legalization is based on science” 1). The reason the American Cancer Society believes that smoking marijuana cannot be used as a medicine because of the result of the damage to the lungs. (What are the medical benefits of marijuana?)

National medical associations like the American Medical Association, American Cancer Society and the American Academy of Pediatrics do not endorse the use of smoked marijuana as a means of medicine. This is because there is not enough evidence to justify its medical use. Under the Controlled Substances Act, marijuana is listed as a schedule I substance. Substances that are placed in that category indicate that they have “a high potential for abuse, [have] no currently accepted medical use in treatment in the United States, and [have] a lack of accepted safety for use under medical supervision.” 8 Marijuana then, being classified as such, has no medical value. That makes it quite difficult for scientist to study any potential medical uses, since medical trials require permission from federal agencies like the FDA.

With numerous conditions on researchers, it deters the researchers from conducting such studies. Although these associations do not advocate the use of inhaled or smoked marijuana as medicine, they do incite for more research to be done. While recreational usage of marijuana remains controversial, many people agree that the drug should be legal for medical uses. There are at least two active chemicals that researchers believe have medicinal benefits. One is CBD, which has medical effects without a high and THC, which has pain-relieving properties.

One of the most well known uses is in the treatment of the eye disease “glaucoma”, which increases pressure in the eyeball, damaging the optic nerve and causing loss of vision. According to the National Eye Institute, “Studies in the early 1970s showed that marijuana, when smoked, lowered intraocular pressure in people with normal pressure and those with glaucoma.” These effects are shown to slow the progression of the disease, preventing blindness.

What states have enacted bills regarding the legalization of marijuana? The first states to act were Colorado and Washington, both of which made the possession, cultivation, and use of marijuana legal in 2012 in addition to allowing sellers to obtain licenses to legally distribute the drug. Next came Alaska and Oregon in 2014 with similar laws that have already legalized the possession, cultivation, and use of marijuana but not necessarily the sale. In addition, 23 other states have either decriminalized cannabis possession and/or legalized medical cannabis. 6 Can marijuana be regulated like alcohol is? Does regulating marijuana make it safer? How much revenue and tax dollars has the legalization in certain states brought in. Based on current results in states that have legalized marijuana, the substance can be regulated like alcohol and regulation in fact makes it safer for consumption.

Using Colorado as an example, not much has changed on the surface but the proof can be found in data reported about the state after a full year in which adults were allowed to purchase and grow marijuana legally in the state. According to state data, possession charges for the drug, which were at 30,000 in 2010, are expected to total below 2,500 for the year 2014. As for the regulation, the rules enforced by the Colorado Department of Revenue caused the state to bring in more than $40 million in marijuana taxes alone, a majority of which will go towards efforts to prevent the use of the drug by youths and the promotion of overall mental health. Traffic fatalities are also near historic lows, and since the legalization have continued to drop. Colorado is also now seen as a state with one of the fastest growing economies as the unemployment rate is at its lowest since 2008, which is well below the national average.7

Efforts to legalize marijuana as medicine in the United States has grown significantly in recent years and will continue to grow. With modern technology becoming more and more state-of-the-art, the hope for medical marijuana to be nationally recognized, as a form of medical treatment remains strong. The legalization of marijuana will reduce crime activity, provide better treatment for certain diseases or illness, and could save the country up to 14 billion dollars per year in government spending enforcement. The billions of dollars being thrown away on marijuana prohibition is not going to make this huge market go away but will cause the bloodshed that inevitably comes with prohibition, just as it did during America’s hapless experiment with alcohol. 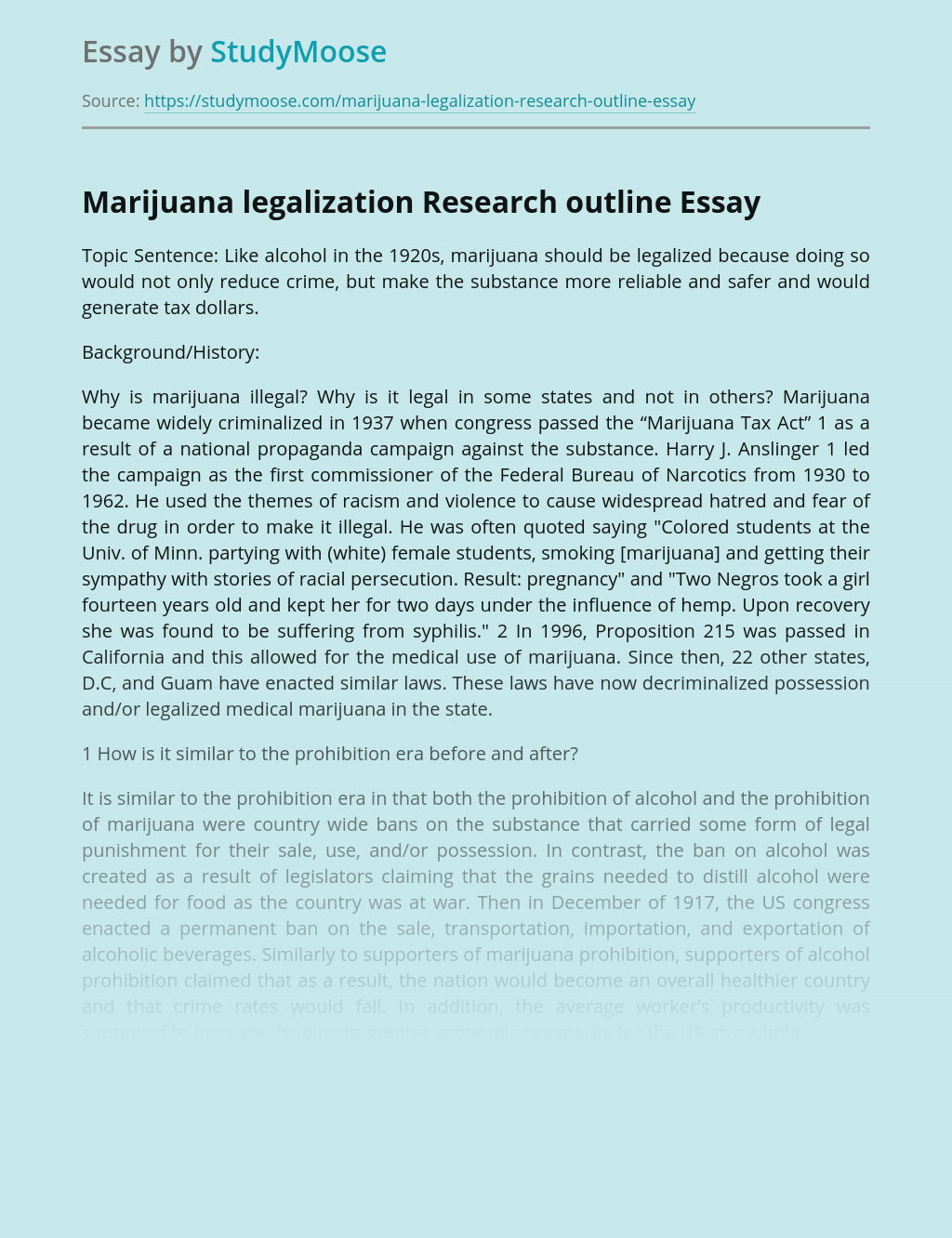