The comic opera is a new operatic genre which denotes a dramatic singing of a light natural, and earthy comedy, usually with a happy ending. The form of comic opera first developed in the early of 17th century. It began to distinguished from other operatic form since in the early 18th century in Naples and Venice. It developed by the poets, composers and entrepreneurs that offered social criticism and appealed to a wider audience. In 18th century, the comic opera included the types of opera buffa (comic opera), dramma giocoso (jesting drama), dramma comico (comic drama), and commedia per musica (comedy in music).

Get a verified writer to help you with Opera Buffa

In nowadays, opera buffa is as to encompass all these types. So basically this is one of the type called opera buffa. And another important type of comic opera is the intermezzo. An opera buffa was a full-length work with six or more singing characters and was sung throughout. The story of it concentrated on common people in the present day, different from the stories in serious opera, and chose farcical subjects in order to represent the weakness of deceitful husbands and wives, aristocrats and commoners, vain ladies, miserly old men, awkward and clever servants, pedantic layers, bungling physicians, and pompous military commanders.

The comic characters often surrounded by serious characters, making contrast and telling the story happened between them. The recitative (the dialogue) was often set in rapidly. Opera buffa aimed at and won a middle-class audience primarily. The intermezzo was a short piece, usually only two or three segments, which was produced between the acts of a longer, more serious opera.

The comic characters were given Their own separate story from a serious opera in the intermezzo. The plots usually presented two or three people and the music proceeded recitatives and arias alternatively.

These intermezzi made contrast sharply with the grand and heroic manners of the principal drama. Different from early opera buffa, the intermezzos were accepted by aristocratic patrons and were performed at court as well as in public opera houses. One of the most famous intermezzi is Pergolesi’s La serva padrona, from 1733. This piece was typical of comic opera in miniature, and it showed aspects that become standard in the opera buffa in late 18th century. La serva padrona has only three roles and only two singing roles: a soprano (Serpina) and a bass (Uberto) with his mute valet (Vespone).

Serpina–young, coquettish, impudent. Uberto, old and grumpy, puts up a show of resistance, but is foolish enough to imagine That Serpina has her eyes on him rather than his possessions. Much of dialogue is written in the rapid simple recitative accompanied only by the harpsichord and usually a sustaining bass Instrument, with the words set to lively, speech like rhythms. Pergolesi’s description of character and emotion through simple, highly contrasting melodic ideas over light accompaniment made his successful and influential in particular.

The later Neapolitan composers were Niccolo Puccinni, Nicola Logroscino and Baldassare Galuppi. In Niccolo Puccinni’s La Buona Figliuola (The Good Girl), serious, sentimental or sad plots began to appear alongside the traditional comic ones. Another development appeared in the comic operas of Nicola Logroscino and Baldassare Galuppi. The ensemble finale which at the end of an act, all the characters were brought on stage gradually, becoming more and more vivacious until it reached a climax.

And this development particularly contributed to be such a notable feature of Mozart’s comic operas. The opera buffa in the later 18th century was extremely important in terms of its influence on the Italian opera seria. The vivacity, expressiveness, and naturalness, the sense of real human emotions as opposed to the lofty gradually found in opera seria. And its characteristics became the precursor to Mozart, Donizetti and Rossini’s comic operas. The comic and serious paths converged, and it appeal to the wider audience which not only want tragedy but also comedy.

Get a verified writer to help you with Opera Buffa 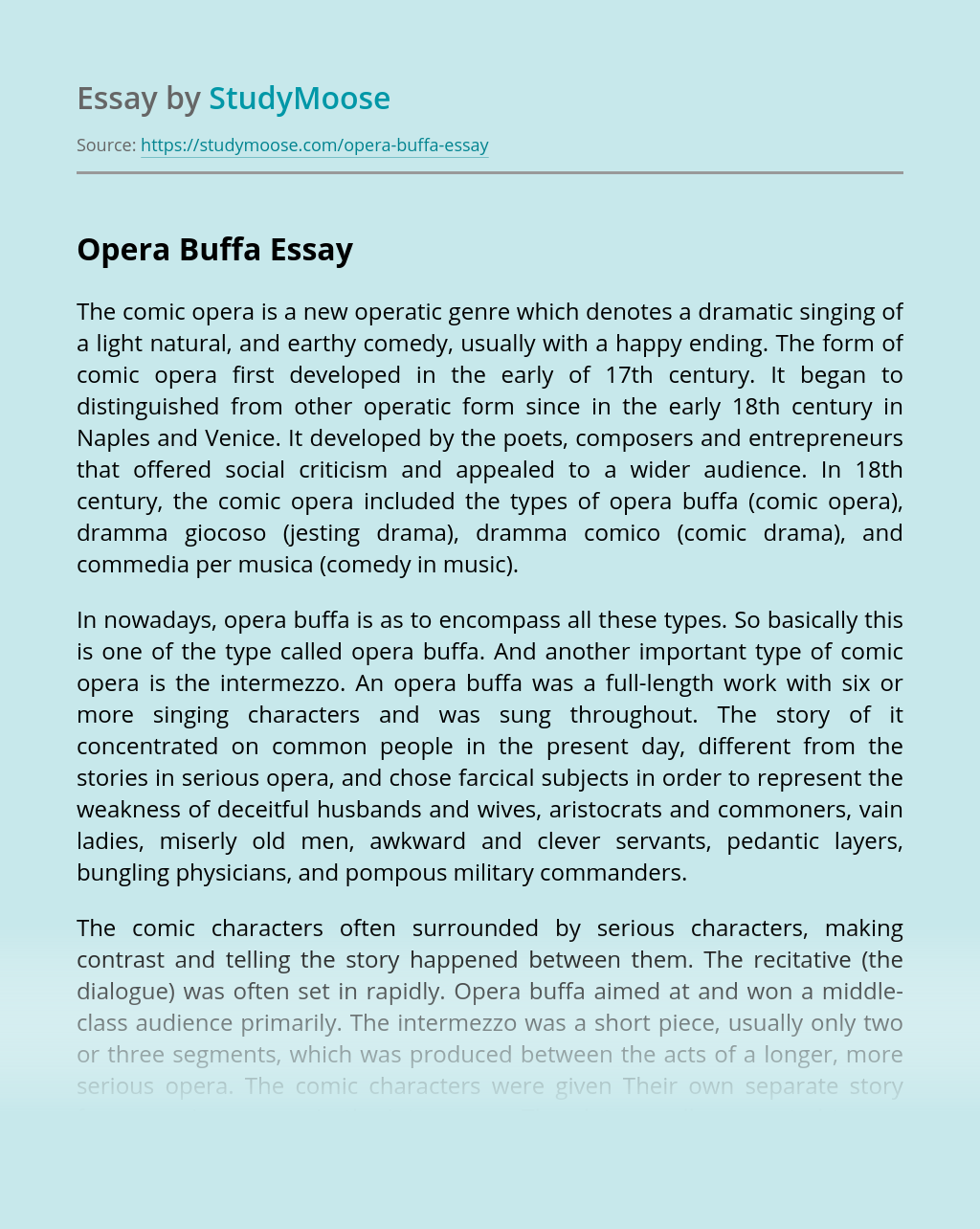 Johann Sebastian Bach’s Fugue 16 in G Minor is an example of a conventional fugue. What is interesting about this piece is that the body of the fugue is comprised of fragments of the subject and countersubject. The material within the episodes are a unique to this fugue. Also, inversions are found in key spots...

The Burial at Thebes

Get Essay
The U.P. Jammers’ Club

U. P Jammers’ Club is an established socio-cultural organization of a well-known university. It was founded on October 8, 1991 and since then, it has brought several musical icons in the music scene. The organization aims to enhance the capabilities and skills of aspiring young musicians and form camaraderie within the group. The organization showcases...

The Outcasts of Poker Flat by Bret Harte

Most situations require a leader, like the Governor in New Jersey during the recent hurricane. The Governor made choices that he thought would help better the people. Overall the mayor just wanted to protect and lead the people of New Jersey. Another example of leadership like what occurred in Jersey was a simple man by...

Hickory Dickory Dock is a work of detective fiction by Agatha Christie and first published in the UK by the Collins Crime Club on October 31, 1955[1] and in the US by Dodd, Mead and Company in November of the same year under the title of Hickory Dickory Death[2][3]. The UK edition retailed at ten...