Legalization of Marijuana outline and speech

Marijuana has always been an issue in our country’s history. However, today, it has gained more attention than it has in the recent decades. People were raised and taught since their early years that this plant brings nothing but trouble to your life if you consume it, for any reason. However, marijuana isn’t as bad as we were all taught that it was. Legalizing marijuana can actually bring many benefits to many groups in today’s society. It’s actually not that bad of a plant once you get to know it a little better.

Don't use plagiarized sources. Get your custom essay on
“ Legalization of Marijuana outline and speech ”
Get custom paper
NEW! smart matching with writer

Legalizing marijuana can benefit the American government in a few different ways. One way that it could benefit the government is by selling it and taxing it. Alcohol and tobacco, though known as two drugs that can cause harm to you, still sell and bring in a lot of federal and state tax revenue, regardless of how high taxes are placed on these products.

The size of the marijuana market, though illegal, is still very huge and very profitable. If the government were to legalize marijuana, it could bring approximately up to $8.7 billion in federal and state revenue. This could help the government tremendously. This much money can be used for a lot of different things. One thing that this money can help improve is education. For example, in the state of Colorado, it is said that the state has already gained $10 million in taxes from retail stores in the first 4 months.

They said that the first $40 million that they gained in taxes from these “pot” retailers would be used in their education system and infrastructure, as well as educational campaigns about substance use.

This money can be used to purchase new books, technology, equipment, etc., that could be useful to students and teachers in public schools. With a new industry and legal market going on, it could also help create more jobs. In Colorado, more than 10,000 jobs have been created since January of 2014. Many people that were unemployed have now been able to get a job in the marijuana industry, whether it be in distribution, trimming the plants, packaging, petitioning, educating, advertising, and so much more. Samples about the legalization of marijuana.

Marijuana can also bring many health benefits to those who are in need of its “super high powers.” One disease that it can help treat or prevent is glaucoma. Glaucoma starts when pressure in the eyeball increases, damaging an optic nerve and causes the loss of vision. So, how does marijuana help exactly? Well, according to researchers, marijuana helps reduce the pressure in eye. It has been said that it lowers the pressure in the eyes of people with normal vision and even in people who have glaucoma. Marijuana can also help control epileptic seizures. Marijuana contains a chemical that many people know as THC. THC can help control seizures that are not responsive to other treatments taken to control them. It has been tested with animals and proven to reduce seizures in epileptic rats.

There are epileptic people who actually consume marijuana and believe that it help to control their seizures, saying that it helps to regulate their relaxation. One important disease that marijuana may be able to treat is cancer. A chemical in marijuana knows as CBD is believed to stop the spread of cancer by turning of a gene that helps produce cancer cells. Some studies even show that some compounds in marijuana could even actually kill cancer cells. There are studies where people with cancer consume marijuana and believe that it reduces the size of their tumors.

Legalizing marijuana can also help reduce crime rates and spending money on crimes related to marijuana. The United States government spends a lot of money on prisoners, approximately $68 billion a year. It is said that about one-third of the prisoners are incarcerated for nonviolent drug related crimes. This means that legalizing marijuana could help save $11.3 billion from spending on imprisonments. That can help the government save a lot of money and maybe reduce the deficit. According to researchers, it is also believed that legalizing pot could reduce crime rates. Since the legalization in Colorado, about 10.1% of crime has decreased, and a 6.9% decrease in violent crimes.

These crimes involve homicides, burglaries, and sexual assaults. Property crime rates have dropped about 11.1%, involving burglary, larceny, auto theft, and thefts from motor vehicles. Legalization of marijuana could also help reduce the number of traffic deaths. According to some economists’ studies, states that have legalized the use of medical marijuana have dropped 9% in fatal car wrecks, which means that there was a decline in drunk driving. This proves that driving high is so much safer than driving drunk.

Many people will continue to believe that marijuana is worse than alcohol or tobacco and believe that it will bring nothing but bad things to people who consume it. However, there are facts and studies that prove that legalizing marijuana could bring various amounts of benefits to many people. Like I said, it’s not that bad once you get to know the plant a little better. Remember, don’t knock it until you try it.

Legalization of Marijuana outline and speech. (2016, Sep 04). Retrieved from http://studymoose.com/legalization-of-marijuana-outline-and-speech-essay 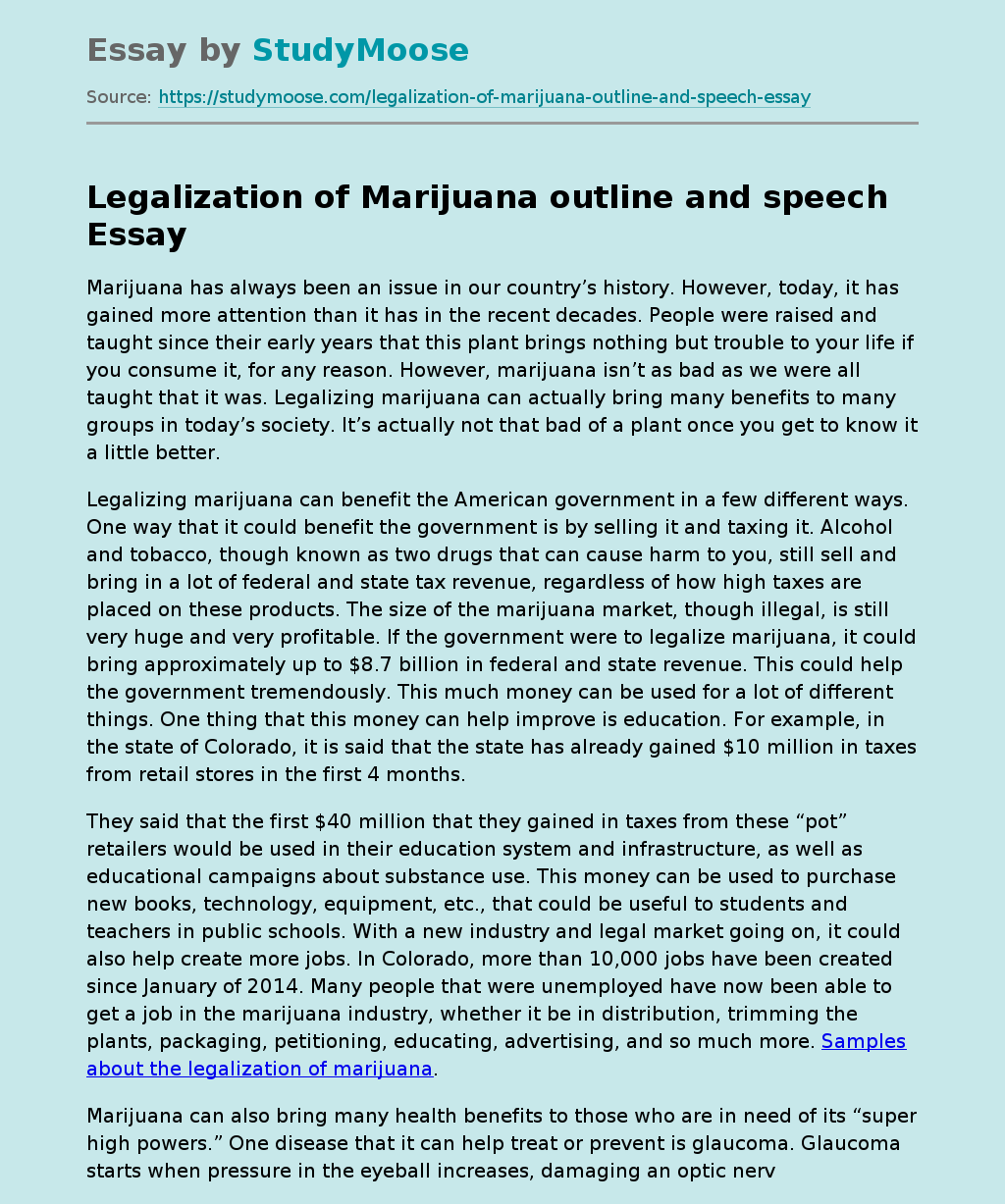