Legalization of Abortion in the Philippines

There are numerous issues that divide the population. Abortion, a long-standing issue, is one of these. Even in ancient and medieval times, people have engaged in such act. In ancient China and Egypt, different methods have been developed to induce abortion such as the use of herbs. The medieval period saw developments in techniques such as the use of forceps and anaesthesia. As expected, with the development of the methods of abortion also comes strong opposition, primarily from religious bodies.

The issue of abortion is a controversial topic in the Philippines, despite being a Catholic country.

Don't use plagiarized sources.
Get Your Custom Essay on Legalization of Abortion in the Philippines Just from $13,9/Page

This is because liberal ideas such as feminism, have reached our shores, I see that, at present, there are some women rights group in the Philippines that are pushing for the legalization of abortion. They point out that abortion is already rampant in the Philippines, although unbeknown to the general public. These abortions are usually done in make-shift clinics by people who often have no professional medical background.

This puts the mother in a dangerous and life-threatening situation, with 8 out of 10 of these women develop complications. With these findings, pro-choice groups believe that if abortion would be legalized, abortion will now take place in medical settings, ensuring the safety of the mother. They also emphasize that victims of rape, incest, and sexual trafficking who become pregnant because of the abuse should be given the right for abortion since they did not plan on having a baby in the first place.

On the other, it is clear that the Catholic Church, a big institution in the country, and pro-life groups abhor abortion since it is synonymous to murder, a mortal sin. For them, life starts in conception, and aborting the fetus even in its earliest stage, ends a life. Abortion deprives the unborn of the life and experiences it should have undergone if it were delivered alive. They suggest that if the baby is unwanted, why not give it up for adoption.

I feel conflicted about this issue since I am both a Catholic and a woman. It is easy to say no to abortion because it is wrong according to my religion. As a woman, I, too, believe that I should be given the right to my own body. Nonetheless, taking these all side, regardless of me being a Catholic and a woman, I am a firm believer of the sanctity of life. Life, in all its forms, must be respected and protected. Everyone must be given an opportunity to experience life.

In an emotional sense, every pregnancy is different from each other. Some women have planned it for years while others get pregnant by “accident”. In sad cases though, pregnancy can occur from rape, incest, and sexual trafficking. Since the perpetrator is the father of the fetus, it is hard for the mother to develop love and affection towards it. For many, they believe that getting an abortion can solve this problem. Maybe I am not to judge their actions since I have not experienced the pain and suffering that these women must have undergone.

However, I can say that if there is someone that must be punished because of the abuse, it must be the perpetrators. The unborn child must not be harmed since it did not choose to be made. It never inflicted pain towards its mother. It is just a product of an unfortunate event. If the mother does not want to keep the baby, she should just give it up for adoption where the child is given a chance to live and experience life.

I think that abortion should not be legalized in the Philippines. In Article 11, Section 12 of the 1987 Philippine Constitution, the state must protect the life of the mother and the unborn. Abortion, therefore, is unconstitutional. If ever, but unlikely, a new constitution will be drafted and will legalize abortion in the country, this will pave the way for new ethical issues to arise. People then will argue that if abortion is legal, then why not legalize this or that. In the years to come, the Philippines will be a country that only values the wants and comforts of its citizenry, and not the sanctity of life.

I believe that the government should strengthen their campaign against abortion. It should put sharper teeth to the law in order to eliminate such practice in the country. It should also provide comprehensive assistance to victims of sexual abuse in order to help them overcome psychological stress to avoid opting for abortion, and guide them on how to raise their children.

Legalization of Abortion in the Philippines. (2016, May 08). Retrieved from https://studymoose.com/legalization-of-abortion-in-the-philippines-essay 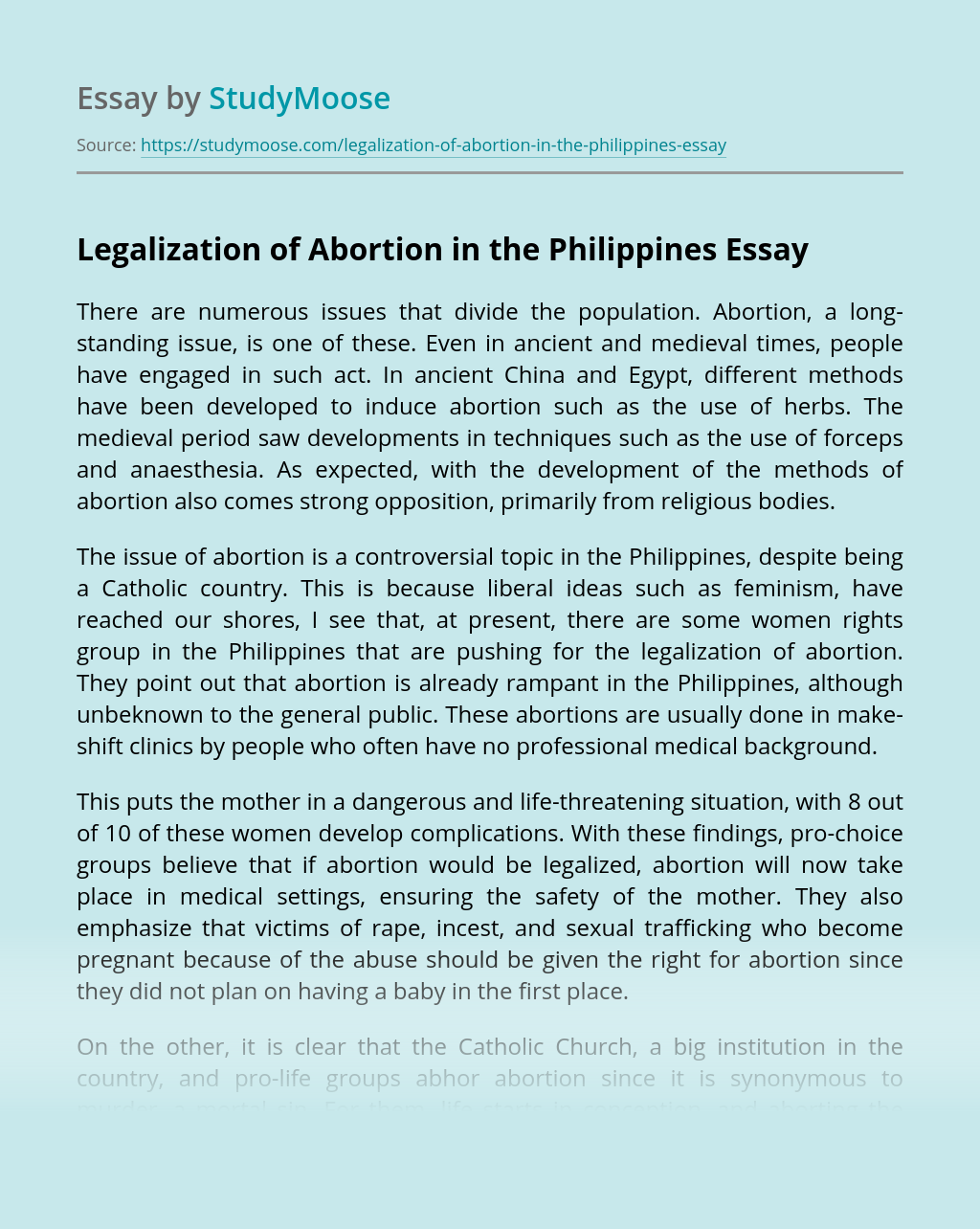 Due Process vs Crime Control

Abstract Although crime control and due process have some similarities, there are more contrasts between the two. Crime control emphasizes crime prevention, whereas due process emphasizes the protection of citizen’s rights from mistakes made by criminal justice agencies. The ethical dimensions of key issues confronting the criminal justice system and private security concerning to due...

Person-centred values Person centred values means the people whom we support are able to be involved and included in every aspect of their care and support. For example: * Their needs, Assessments, Care delivery, and Support planning. So basically person centred approaches, policies and procedures and care practices should put the residents at the centre of the day-to-day activities. It should also include the...

The Pros of Racial Profiling in Law Enforcement

The image of hundreds people jumping to their deaths out of windows 1,000 feet of the ground, to the masses of people chaotically running through the streets will never be forgotten to the people affected by terrorist attacks on September 11, 2001. Ever since that catastrophic day in history, the push for safer national security...