Abortion Debate: Should Abortion be Legal

Opening Statement: Should Abortion be legal?

Consciously ending a pregnancy before normal childbirth opens the abortion debate. Whether it is a right or wrong thing to kill an unborn but viable fetus, abortion remains one of the most polarizing issues. Most people are either pro-life (against) or pro-choice (for abortion), only a few are unsure.

According to the guardian, some countries like the USA, has branched out the abortion debate to a political and legal issue. The 1970s was an important year for women willing to abort.

Don't use plagiarized sources. Get your custom essay on
“ Abortion Debate: Should Abortion be Legal ”
Get custom paper
NEW! smart matching with writer

In fact, Roe v. Wade decision gave the right to women to have abortion. However, the last 40 to 50 years of America history have more or less been a backlash against abortion, as people tend to criminalize this action.

In 2008, approximately 1.21 million abortions took place in the US, but about 4 in 10 end abortion. Therefore women and men facing the moral dilemma of whether or not to terminate the pregnancy at its early stage tend now keep the fetus.

Thus, people’s opinions on this topic are taking time to change but the number of individuals ending an abortion is increasing since the 1970s (even if it remains still low).

One of the biggest reason abortions is such a taboo subject is because of the implication it has on a living being. As it stands life is extremely rare, in fact it’s so rare that the odds are 400 trillion to one, to put that into context you have more chances to win the 100-million-pound lottery 9 times over a lifespan. Life is truly precious. Moreover, many antiabortionists argue that aborting is murder, rightfully so as it ends the development of human life and as it stands all societies condemn the act of taking a human’s life, born or unborn.

The Act of Aborting is Usually a Selfish Act

Many would argue that abortion prevents unwanted situations that can lead to an unstable life such as unstable financial situations, lack of maturity or shelter etc. But one may also argue that the majority of women who abort aren’t in the right state of mind in the first place, therefore, neglecting ones responsibilities as a future mother wouldn’t help said person but push them into a life of more uncertainties and encourage them to make the same mistakes. But this is only the tip of the iceberg as roughly 8% of women proceed with the abortion 3 months after conception, harming the baby in development as it can process and feel pain after 8 weeks. To add to this most abortions are performed at the expense of the future baby as less than 1% of abortions stem from a mother’s health conditions that are potentially life threatening. This further adds to the agenda of antiabortionists postulating that fetuses are entirely defenseless beings, turned into victims through no fault of their own.

Abortion Can Lead to Misuse and Overexploitation

Abortion shouldn’t be regarded as a method of contraception and yet overexploitation of the practice says otherwise, according to a national survey in the U.S performed in 2017, 36.6% of women have had repeated abortions, this statistic leads to believe that nearly 4 in 10 women make the same life changing mistakes repeatedly, which is quite frankly very worrying. The law acts as a regulator in all societies, wouldn’t it be wise to make a law against abortion preventing women from abusing it?

People nowadays tend to criminalize abortion and see it as an immoral act. In fact, even if an embryo doesn’t have the capacity to think deep thoughts before 14 days, it has the potential to do so; therefore an early fetus is a human being. Killing a human being is unethical, for this reason pro-life supporters claim that abortion is unethical.

Abortion Debate: Should Abortion be Legal. (2021, Feb 19). Retrieved from https://studymoose.com/abortion-debate-should-abortion-be-legal-essay 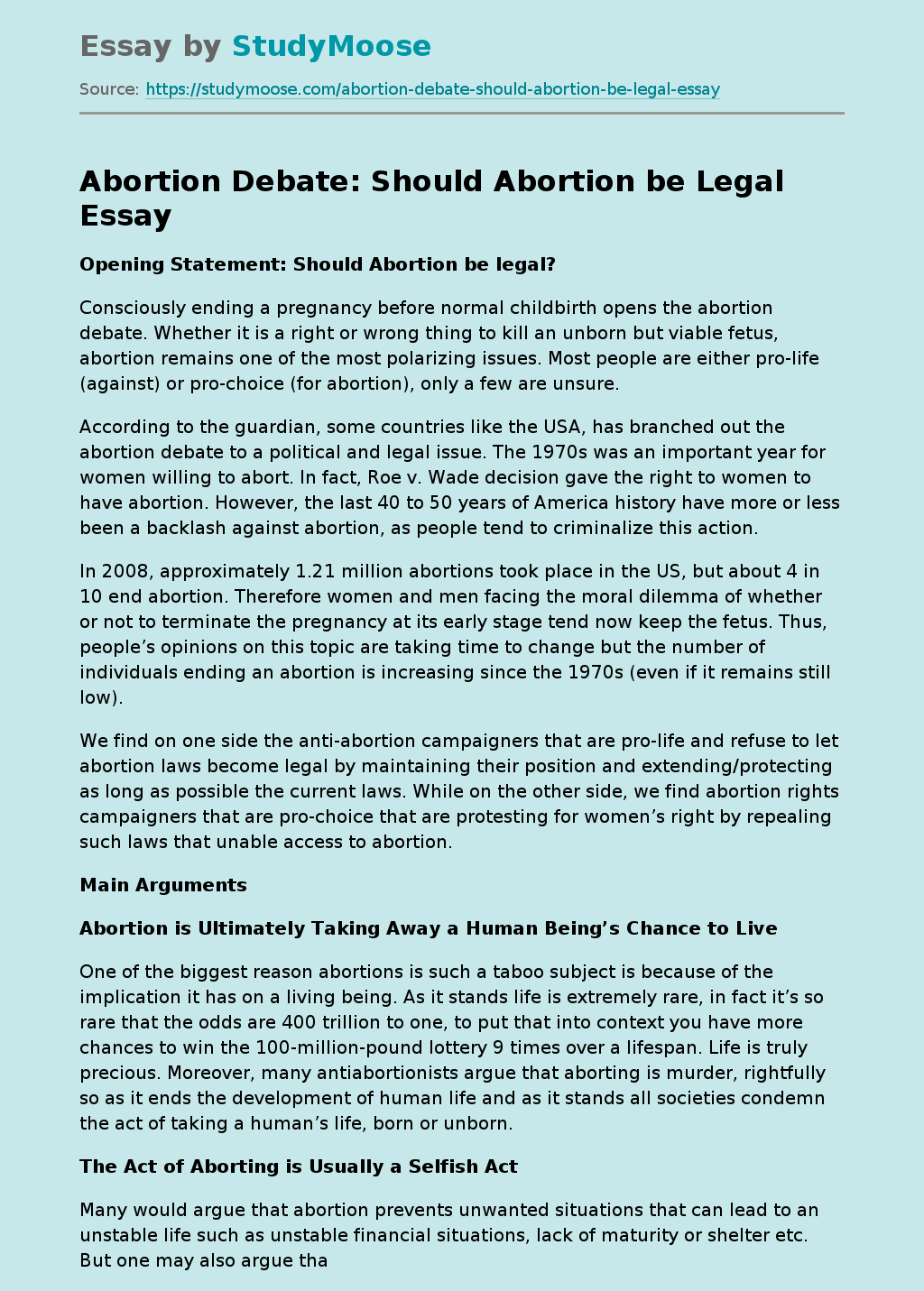