Why the legal age to get a tattoo should be lowered?

Would you prefer your child/grandchild have a safe tattoo or a potentially life threatening disease? A tattoo may be a scary thing for the parent of a teenager, but in the heart of a parent who loves their child the possible dangers of a tattoo achieved through the ambition of a teenager should far outweigh a little bit of ink-stained skin. Legal tattoo parlors are required to be licensed, provide a safe and sanitary environment, follow proper procedures for tattooing, and check for proper ages on their clients.

Don't use plagiarized sources. Get your custom essay on
“ Why the legal age to get a tattoo should be lowered? ”
Get custom paper
NEW! smart matching with writer

Many parents are against their children getting tattoos.

In the event that someone under age has no parental consent to be tattooed, the teens’ choices are to wait until they are old enough for legal tattooing or to find a way to get the tattoo they want, anyway they can get it. Teenagers are perfectly capable of finding ways of getting their tattoos without their parents having a say so in it, but they may not always be choosing the safest place or method.

As Amy Cappiello in “Minors get around tattoo laws” stated “When parents refuse to sign the release forms, there are several alternative routes: using a fake ID, visiting a parlor that has a reputation for not checking identification, or doing it yourself. Health care professionals say the most dangerous option is to do it yourself. Risks of an unsterile environment range from mild infections to Hepatitis B or other viruses transferable through blood.

“That’s why I think the state laws should be 16 to keep kids from doing it themselves and going to underground dungeons and getting some disease,” said Joe Kaplan, president of the Professional Tattoo Artist Guild“.

Many teens have friends who have gotten tattoos from parlors and know which ones do and don’t check for ID’s and are able to get their tattoos done there, but often times teens know somebody who has a tattoo gun and can do their tattoo cheap for them any afternoon at their house. This is where everything gets very unsanitary and can lead to many types of diseases and infections that could be potentially life threatening.

If you are a parent who decides to allow your child to get a tattoo, you can help them by guiding them towards a reputable, licensed tattoo parlor and by becoming better informed of the risks and dangers associated with a tattoo so you can work together to avoid these risks. Mayo Clinic states the following different risk factors associated with getting a tattoo: “Allergic reactions. Tattoo dyes — especially red, green, yellow, and blue dyes — can cause allergic skin reactions, such as an itchy rash at the tattoo site. This can occur even years after you get the tattoo.

Skin infections. A skin infection — which might cause redness, swelling, pain and a pus-like drainage — is possible after tattooing. Other skin problems. Sometimes bumps called granulomas form around tattoo ink. Tattooing can also lead to keloids — raised areas caused by an overgrowth of scar tissue. Bloodborne diseases. If the equipment used to create your tattoo is contaminated with infected blood, you can contract various bloodborne diseases — including tetanus, hepatitis B and hepatitis C”.

These risks are all possible no matter how well the needle and location is sterilized. It all depends on how each person’s body reacts to these different things. However, if you work with your child on getting his or her tattoo, you are able to monitor any possible health effects of the tattoo. In Larry Gerber’s book Getting Inked What to Expect When You Get a Tattoo he says that “Some tattoo professionals warn that people with certain physical conditions shouldn’t get inked.

To avoid infection, people with open sores or lesions should wait until the problem is cleared up before having work done on their skin. Pregnant women should wait until they have their babies before they get tattoos. People who take blood-thinning medications should avoid tattooing as the breaking of skin could lead to excessive bleeding in these cases.

Getting a tattoo isn’t a good idea for anybody who’s sick, even if it’s just a cold. Some tattoo artists will refuse to work on people who have coughs or sniffles and will tell them to come back when they’re healthy again.”(10) These are some health considerations that most people probably would not consider to be a problem; therefore, it is a good idea to guide your child through the process of being educated about the potential dangers.

A person, young or old, knows what they want. However, no one knows today what they will want ten years from now. However, our government seems to feel that a 16 year old teenager has an enormous lack of knowledge compared to an 18 year old about whether or not they should be able to get a tattoo. In his book Getting Inked What to Expect When You Get a Tattoo, Larry Gerber also states that “Age is an important factor when considering a tattoo.

In most U.S. states the legal age of adulthood is 18. People under the legal age may get tattoos in some states as long as they have a parent’s consent. But in many states it doesn’t matter whether a parent agrees or not; the law forbids giving a tattoo to anyone who’s not an adult. For teenagers who want a tattoo, the laws may mean waiting a few months or a few years.”(7) Some teenagers do not have the patience to wait for such a long time.

They want their tattoos immediately rather than waiting for a couple of years. This is one of those situations in which a teenager will turn to illegal tattooing such as going to someone’s house or using a fake identification to get their tattooing done. They are not concerned with the health risks involved, much less the laws regarding tattooing! If a teenager is going to go get a tattoo, it would be a whole lot better to know that he or she was free to walk into a licensed, safe tattoo parlor to have it done, rather than in someone’s kitchen or bathroom.

Most people do not know that tattoos have been around for many, many years in every part of the world. It is not a new fad. It has been used in many places for many purposes throughout time. A National Geographic article by Cassandra Franklin-Barbajosa states, “The earliest record of tattoos, to date, was found in 1991 on the frozen remains of the Copper Age “Iceman” scientists have named Ötzi. His lower back, ankles, knees, and a foot were marked with a series of small lines, made by rubbing powdered charcoal into vertical cuts.

X-rays revealed bone degeneration at the site of each tattoo, leading researchers to believe that Ötzi’s people, ancestors of contemporary central and northern Europeans, may have used tattoos as medical treatment to reduce pain.” “During the Crusades of the 11th and 12th centuries, warriors identified themselves with the mark of the Jerusalem cross so that they could be given a proper Christian burial if they died in battle.

After the Crusades, tattooing largely disappeared in the West for a time, but continued to flourish in other places.” She goes on to talk about tattoos being used in Europe, the South Pacific, the Central Pacific, Tahiti, New Zealand, Japan, and of course the United States. Anyone thinks that tattoos have no history or significance should go research the traditions of tattoos for the past 5000 years. It is quite interesting and many people from many places have contributed greatly to the modern day tradition of tattooing.

The age that a person is legally allowed to have a tattoo should be lowered throughout the U.S. Teenagers can think. Teenagers know what they want. Teenagers have the ability to distinguish right from wrong and good from bad. However, the ability to decide what we will want in ten years is not determined by our age. The dangers and risks of infections, skin reactions and blood borne diseases are the same for any person of any age. Having a tattoo applied raises these risks for all ages. Having a tattoo applied by an unlicensed person raises the risks even more.

Teenagers are usually quite determined to do what they have on their minds, and getting a tattoo is just one of the things that might come up. Teenagers should be able to have a tattoo applied safely and freely, if that is what they want. When something is bound to happen, our society can make it happen safely. When it comes to tattoos, we can keep our teenagers safe by lowering the age at which people can have a tattoo applied. This would provide the option for teenagers to get their tattoos in a sanitary and professional environment, where they would be educated on the risks involved.

Why the legal age to get a tattoo should be lowered?. (2016, May 14). Retrieved from http://studymoose.com/why-the-legal-age-to-get-a-tattoo-should-be-lowered-essay 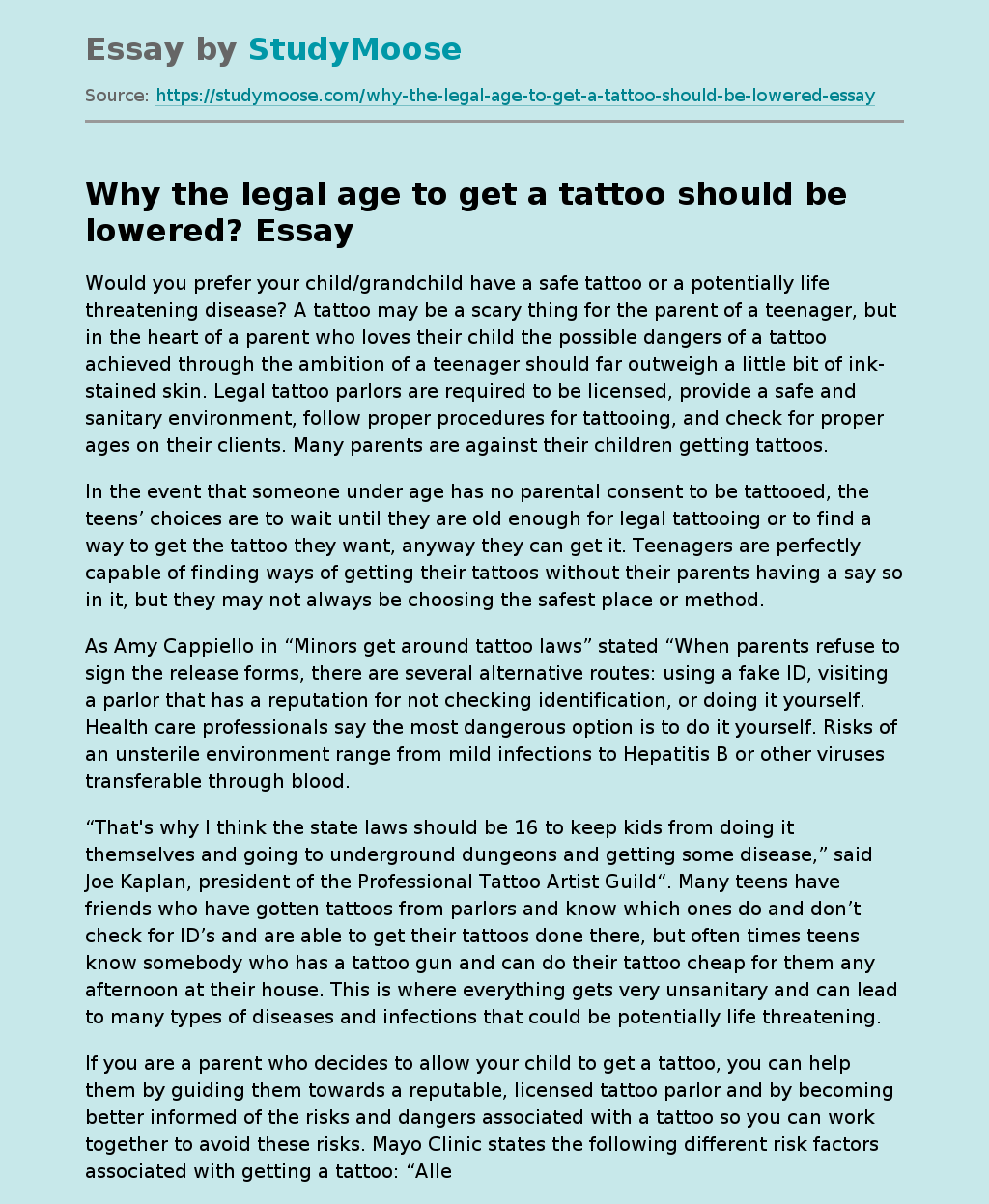