The Concept of Tattoo and Tattoo Artist

I have chosen to write about Norman Keith Collins, an American tattoo artist who I believe to have been incredibly influential to the art world. Norman Collins was best recognised as ‘Sailor Jerry’, a name we have all heard mentioned at least once in our everyday lives – whether it be referencing Sailor Jerry the man himself, the ‘Old School’ tattoo movement or the multiple lines of merchandise, fragrance and alcoholic beverages designed with traditional tattoo style packaging to honour his legacy.

Don't use plagiarized sources. Get your custom essay on
“ The Concept of Tattoo and Tattoo Artist ”
Get custom paper
NEW! smart matching with writer

Tattooing has existed for a long time, but Sailor Jerry encouraged a strong progression of the movement in a significant way – with tattooists even today still replicating and referencing his work in tribute.

The act of tattooing has originally been a part of many different cultures for thousands of years. In 1991, a five-thousand-year-old frozen body was discovered with fifty-seven tattoos. Tattoos have also been found on ancient mummies and three thousand-year-old figurines. For some cultures it was a dedication to their religion; whereas in others, it was a mark of wealth and aristocracy.

Tattoos were also used to safeguard health by some – during the ancient times in Hawaii, the art of tattooing was referred to as ‘Kakau’ – which was originally done only in black ink. For many people, tattoos marked their religious devotion and their journey into adulthood. Since ‘enduring’ the tattoo needle can be considered a painful procedure, the process symbolized a person’s toughness and bravery.

Sailor Jerry himself lived from 1911 until 1973. At the very beginning of his life he lived in Reno, Nevada before moving to Northern California to spend his childhood days.

He spent his teenage years hitchhiking, staying out and skipping freight trains across the country. It was during this time that he met a man named “Big Mike” in Palmer, Alaska. The two became a team and Big Mike proceeded to teach Collins the ways of tattooing – more specifically: the hand-pricking method. This method entailed taking a single needle, dipping it into a mixture of black tattoo ink and ‘poking’ the design into the skin – a very old traditional method that is kept alive and still popular throughout various areas of the world today.

By the late 1920s Collins had learnt how to use an electric tattoo machine after being tutored by his Chicago-based friend, Tatts Thomas. He would often practice his tattooing on intoxicated seamen brought in from the poorer parts of the streets, exchanging cheap alcohol or a few dollars in order for them to let him tattoo and practice on their skin.

Over some time, Sailor Jerry managed to expand the array of colours available to artists, by developing his own safe pigments. In addition to this, he also created his own needle formations – these embedded the ink pigment with a lot less trauma to the skin – and he was one of the first tattoo artists of his kind to utilize single-use, sterilized needles.

In January 1930 at the age of nineteen years old, Collins enlisted as a sailor in the United States Navy; this venture entailed many different trips to many various destinations – one of them being Southeast Asia, where Collins was directly exposed to the imagery and Oriental art of the country. His time in the Navy evidently had a major influence and impact on his life and this was made clear throughout the themes he often featured in his tattoos and artwork.

It was during his time in the Navy that Norman Collins developed a lifelong obsession with ships and sailing. Over time, he would eventually earn master’s papers on every kind of boat that he could possibly be tested for. Collins sailed the Pacific Ocean before eventually settling down in Honolulu, Hawaii in the 1930s. In his free time from tattooing and cruising the seas, Sailor Jerry played the saxophone in a dance band and hosted his own radio show where he was best known as ‘Old Ironsides’.

At the height of WWII, there were over 12 million Americans serving in the military. The percentage of these men on shore leave was high, and the likelihood of them ending up in Honolulu was even higher. Perhaps to escape from the war for a few hours, many American men could be found on Honolulu’s Hotel Street – in environments that would usually have only existed in the more distant outskirts of the island: i.e brothels, bars and tattoo parlours.

Hotel Street District was where Sailor Jerry built his legacy. Sailors from all stations of life were desperate to get tattooed, get drunk and enjoy the company of women whilst on shore leave, before returning to the stress and hardship of the war.

‘If you don’t think you’re man enough to wear a tattoo, don’t get one. But don’t try to make excuses for yourself by knocking the fellow who does!’ Signed, ‘Thank you…Sailor Jerry,’ this notice was displayed boldly in Sailor Jerry’s Hotel Street shop and promotes a fair idea of the attitude that he brought to his work and designs. He knew that his clients weren’t ‘thugs’ just out to cause mayhem in the streets; to him – they were men living for a higher cause. He once described them as ‘the tattooed barbarians that live and die on world battlegrounds.’

In my own opinion, Collins has certainly left behind a legacy – to this day, his bold style is recognised internationally all over, by many. Tattoo artists consistently produce ‘flash sheets’ and designs drawn in style of the famous Sailor Jerry in tribute to his work. People still very frequently get Sailor Jerry’s own flash work and artists own heavily SJ referenced designs, tattooed onto their skin permanently. There is an infinite variety of Sailor Jerry inspired merchandise available to purchase online and even now more than forty years after his passing, people still frequently wear clothing and collect tattoos and pieces of artwork that are adorned in his ‘flash’ designs.

Throughout his career, Sailor Jerry maintained contact with various tattoo artists from all across the world. The following unprecedented generation of tattooists respected Sailor Jerry thoroughly and were keen to learn everything they possibly could from him and pick up on as many tips and tricks of the trade as they could essentially acquire. Out of this newer generation of tattoo artists, rose Mike Malone and Zeke Owen, two artists who felt particularly compelled to gain a deeper understanding of Collin’s work. They wrote letters to him on a regular basis.

Don ‘Ed’ Hardy was also a young upcoming tattooist whom Sailor Jerry maintained regular contact with. The pair would write to each other frequently, initially sharing their thoughts on mostly just tattoos and the industry, before eventually going on to mail each other on an almost daily basis to further discuss tattooing, Eastern philosophy and happenings in their personal lives overall.

It was in 1972 that Sailor Jerry sent out an invitation to a specific group of tattoo artists from all over the world, to join him for a gathering in which they could each speak about their tattooing experiences and share advice about things they had learned within the difficult profession. Included in this group of tattooists were Mike Malone, Ed Hardy and Des Connely who each travelled to Hawaii to participate in Sailor Jerry’s body art convention.

Japanese master Hori Oguri had also been invited to the event as a special guest. Oguri ended up being so impressed by the work of Ed Hardy, that he decided to invite Ed to come back to Japan with him to work and study the art of tattooing together. This resulted in Sailor Jerry losing not only his most well-respected apprentice, but also wishing farewell to his long desired dream of opening up a new tattoo studio with Ed Hardy.

Jerry went back to 1033 Smith Street by himself. He continued to tattoo until the year of 1973, when he had a heart attack whilst out visiting a motorbike dealership. Collins was unaware of what had actually happened and put it down to being unwell, so he simply rode his motorbike back home and slept. Within just a few days of this happening, Collins passed away.

Collins had instructed his wife to pass the tattoo studio on to either Ed Hardy, Mike Malone or Zeke Owen, should anything happen to him. If it was found that none of them wanted to take the studio on, he had bluntly advised her to simply burn it to the ground.

Zeke Owen owned his own studio in San Diego and was not prepared to relocate, whereas Ed Hardy was still residing in Japan, working under the mentorship of Hori Oguri. This resulted in Jerry’s studio being sold to Mike Malone, who then renamed it as ‘China Sea’ – in homage to Collins memory. Malone ended up tattooing at China Sea for over twenty-five more years, before finally closing the shop down in 2001.

The Concept of Tattoo and Tattoo Artist. (2021, Oct 07). Retrieved from https://studymoose.com/the-concept-of-tattoo-and-tattoo-artist-essay 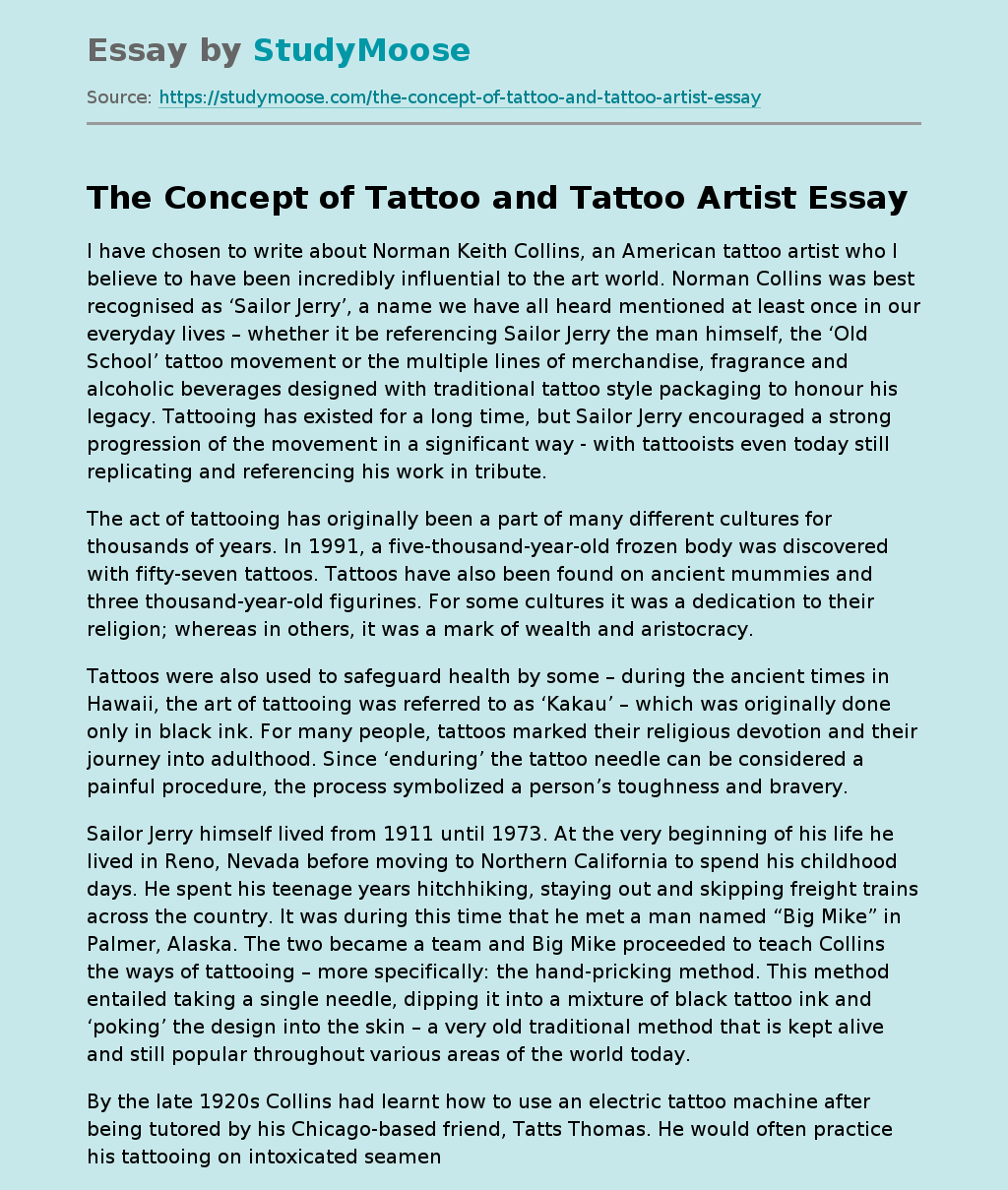