The Negro Artist and the Racial Mountain

In some respects, Langston Hughes had become known for being a great Black-American poet. As a result, aside from the primary reason of having a significant message, his work on “The Negro Artist and the Racial Mountain” became a more interesting read because of his writing style. In many sense, the attack of his text has a more profound appeal than just reading an article from the newspaper. He had presented his argument in a very creative manner according to the tone of his target audience.

Don't use plagiarized sources. Get your custom essay on
“ The Negro Artist and the Racial Mountain ”
Get custom paper
NEW! smart matching with writer

He started his argument by juxtaposing Black poets to White Poets, arguing that some Black poets choose to emulate and idolize White poets. His argument would lead to telling the Black poets who emulate and idolize white poets as wanting to “be white. ” The sharpness of the image that he had painted on the first paragraph is more than enough to hook the readers into his discussion. There is a tone of frustration and yet there is also a hint of truth to his words that is why they are just hard to let go off.

The piece presents to the readers a very interesting irony.

Hughes’ poetic influence is really flowing in his prose. The sentence structure is certainly unconventional as he often chops them off with commas, colons, semi-colons, and dashes. The text would be interspersed with both long run-on sentences and short very short ones. Here is an example of a sentence of Hughes: “The present vogue in things Negro, although it may do as much harm as good for the budding colored artist, has at least done this: it has brought him forcibly to the attention of his own people among whom for so long, unless the other race had noticed him before hand, he was a prophet with little honor.

” (Hughes, paragraph 2) This kind of writing may raise some eyebrows from formalist, they would tolerate long run-on sentences. But it would be important to consider that Langston Hughes is one of the boldest writers of his time. He would undoubtedly not adhere to the conventions if it would suit the message of his text, which is actually for Black artists not to adhere to the conventions set by White artists. In this particular style, he does not want to convey formalistically-correct grammar, it is rather to convey the right emotions.

It is immediately noticeable that the tone of “The Negro Artist and the Racial Mountain” is its most important dimension. This particular piece of Hughes sounds as if it is directly spoken to you through a megaphone. The author’s training in poetry and fiction is reflected through this particular work. Even though the piece appears to be a long read, words and ideas are much economized. Furthermore, there more than enough exquisite lines that would keep a reader hooked until his last sentence.

Hughes’ gift of poetry and his attachment to the issue shines through the concluding line of “The Negro Artist and the Racial Mountain”, which is “We build our temples for tomorrow, strong as we know how, and we stand up on top of the mountain, free within ourselves” (Hughes) This particular line does not even require an exclamation point to be considered a strong and urgent statement. Part 3 Response Imitating one of the greatest writers is an enjoyable and at the same time intimidating.

But playing with tone and other poetry devices is definitely the most enjoyable part of the imitation. It was like writing while entertaining oneself, and simultaneously keeping in mind that there would be a reader that should be entertained and somehow moved. But of course, an imitation would always be inferior to the original, in many respects, although it is still possible for very talented individuals. Honestly, I have to admit that there was still this gap between Hughes and me in terms of the grasp of the language.

What had help a lot in this challenge of imitating a well-known writer is the objective of conveying a message that is somehow significant, and at the same time a message that I strongly agree with—or a message that is of great importance to me. The effect is like after I have said something important to the world, it really feels good from within. It is like thoughts that I had been discussing with myself are now being heard by someone—and if not, it is still in a way recorded though a piece of paper.

After this exercise, I had realized something that could be helpful for those who would want to write or endeavor in any form of expression. It could be that the key to a masterpiece is to really feel about one’s subject and enjoy the challenge of conveying that message, a message that is timely and important.

The Negro Artist and the Racial Mountain. (2017, Jan 29). Retrieved from https://studymoose.com/the-negro-artist-and-the-racial-mountain-essay 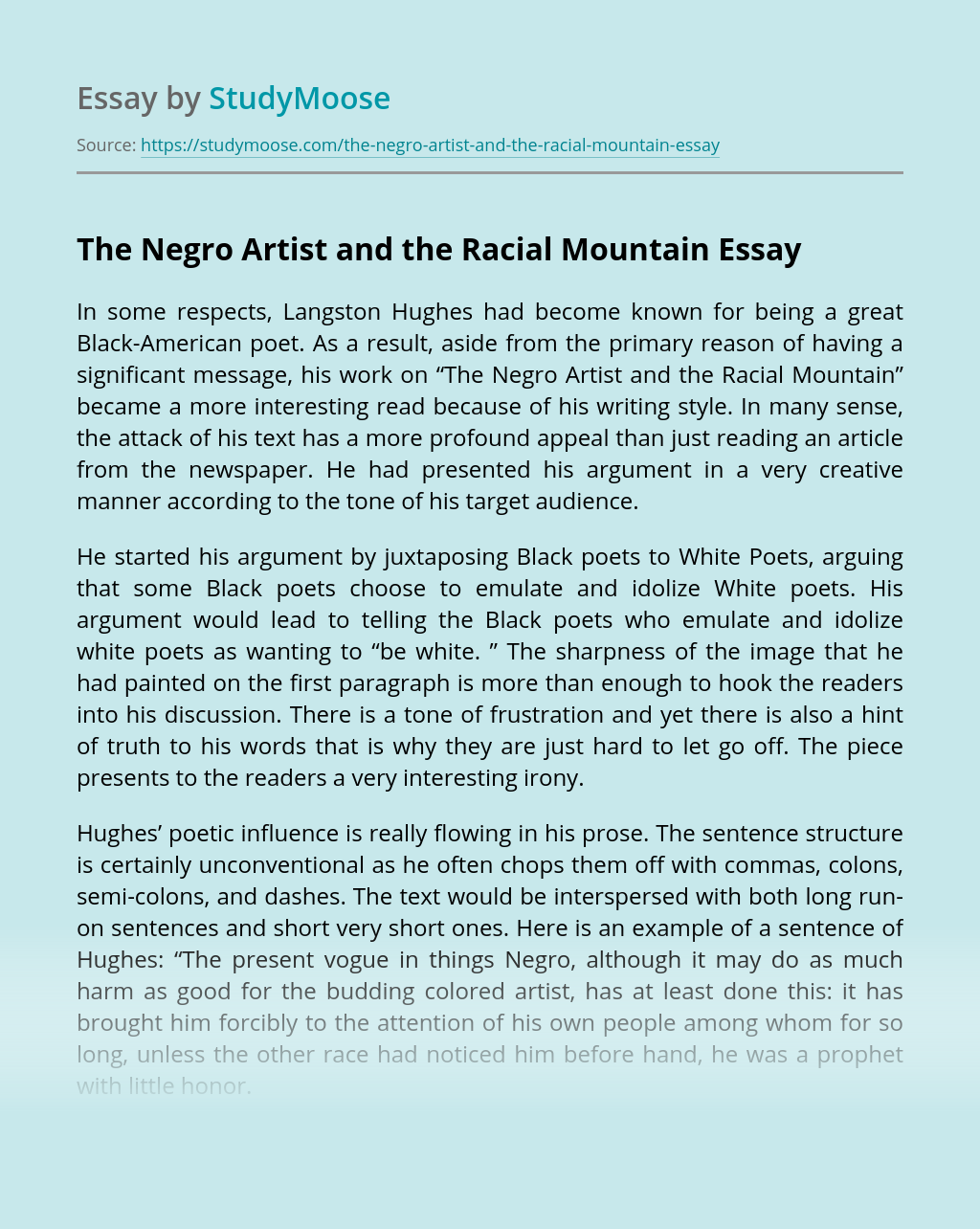