The House Negro and the Field Negro

There are two kinds of Negroes in the American society, according to Malcolm X. They are the subservient house Negro” and the subversive “field negro. ” After making a detailed comparison between the two in the body of his speech, he categorically describes himself a “field negro” (X, Malcolm 1). Malcolm X is what he said he is as a field negro – a defiant black nationalist, with little regard, if at all, in the social institutions founded by white American masters, a representative of the mass of African Americans struggling to unfetter the chain that held the black people to slavery for over four centuries.

Don't use plagiarized sources. Get your custom essay on
“ The House Negro and the Field Negro ”
Get custom paper
NEW! smart matching with writer

Malcolm X was a man for his times, a man who witnessed in his youth the racial abuses of America’s white colonial rulers, a philosophical and religious thinker whose bold ideas and expressive rhetoric found acceptance among many African Americans who had long been subjected to racial abuse and debasement. He styled himself to represent the mass of American Africans, suited up in gentlemanly elegance to earn the respect and attention of his audience.

Malcolm X delivered his speech in plain language — no fancy words, no discombobulated phrases to distract his listeners.

He went straight to the point and tackled issues with surgical competence and sharpness. He explained the term “house slaves” in plain and simple English, in a manner that all his audience could relate to, like the willingness of “house slaves” to pay three times the price of a house to be able to brag “I’m the only Negro out here” (Breitman 11).

So the crowd roared in mock agreement. In like manner, he said a “field negro” represented the masses. He said “when the master got sick, the field Negro prayed that he’d die. ” Nothing could be more graphic than that to illustrate a person’s contempt for another.

Then, he said “I am a field Negro” (X, Malcolm 1) to show where he stood on the issue. He was a confident public speaker, gesturing like a true professional, like a brilliant pastor behind his pulpit. He knew his audience and made sure that he delivered the message that they wanted to hear and did it with aplomb as he underscored every sound bite that appealed to them. He was Master X behind the rostrum. His message reverberated across America with the same force and appeal that catapulted Martin Luther King Jr. into American consciousness. However, his message had none of the diplomacy and statesmanship presented by King.

Malcolm X’s message was radical, uncompromising, violent, and sweeping – and should be better viewed and understood in the context of the era which bred his kind. He preached tit-for-tat as a principle of self-defense and belittled King’s calls for “civil disobedience” and “non-violence. ” Malcolm X envisioned an entirely different route in his efforts to liberate the black people from slavery. His idea of freedom and liberation was for the establishment of a black republic within the United States or return of black people to their respective homelands in Africa, ideas that tended to divide rather than unite more African Americans.

Moreover, he made more enemies than friends in the process of advancing these ideas in the forum of public opinion. Clearly, his ideas were more of a vindictive reaction to centuries of slavery, discrimination, and persecution in the hands of their American masters rather than a well-thought out plan to correct inequities which many well-meaning white Americans had along realized to be wrong and were willing to rectify. Malcolm’s ideas have more rhetoric than bites, more wishful thinking than real. His allegations of racism were directed to all white Americans, which maybe true but not that quite all encompassing.

White American could likewise allege that Malcolm X was a racist for putting all white American together as abusive slave drivers. While some may practice racism, white Americans can claim that not everyone is racist, which is quite true. Malcolm X is a racist himself for his unforgiving tirades against white Americans. Racism is wrong no matter who practices it – black, white, yellow, or brown. As a Muslim convert, he cited the Koran, the Muslim bible, to preach the principle of “an eye for an eye, a tooth for a tooth” (Breitman 12).

He said, “If someone lays his hand on you, send him to the cemetery” (Breitman 12). While he supported King’s civil rights movement in principle, he distanced himself from actively supporting the movement through King’s numerous sit-ins and other protest actions that reverberated across America and roused leaders from Washington D. C. to take notice and spur them to seriously consider the issues presented. The success of the civil rights movement was correctly attributed to King’s strategy of “civil disobedience” not sanctioned by X’s Muslim religion.

If his plan to fight “tooth for tooth,” then the turn of events in the United States would have been different, with the black people being probably shot down for terrorism and mayhem. Then, that would have ended the black American’s struggle for liberty and independence. As if Malcolm X’s call to arms and racist statements were not enough, he called for the return of American Africans to their home countries and the establishment of a black republic within the United States which this writer believes could have altered the course of American history.

He called for the establishment of a Pan African Republic to consolidate all black Americans in the United States. It was an outrageous proposal, but nevertheless it won support among the many members of the black community, particularly the young. It was primarily his forceful voice and the compelling drama that he managed to inject into his speeches that enthralled audiences. He was not the ambulant speaker that many of today’s so-called TV evangelists practice to appeal to TV viewers, strolling around the stage as they deliver their speeches.

He was regal as he stood firm on the podium, cool and calculating, an authoritative figure that spoke in forceful cadence, his hand movements providing the beat from which his voice would follow in different speed, pitches and timbres. He spoke from memory and extemporaneously, reading his lines from the ohs and ahs of his audience, spending more time and adding more lines on issues that drew the most reaction from his audience. He appealed to his audience’s heart, telling them stories from everyday life and from classic books that chronicle their struggles as a people, like Uncle Tom’s Cabin.

He described the “house negro” as Uncle Tom, outfitted in suit just like his master and happy to be in his company. He said there were more Uncle Toms in their midst as the crowd roared in agreement (Breitman 12). . But he assured his audience that there are more “field Negros” in their midst, all of whom were firm in their belief in freedom and independence for all black Americans. He told them they need to be firm and strong, that it was alright to defend one’s self from force and intimidation. To kill their enemies if and when necessary to uphold one’s identity (Breitman 12).

. He said it was not alright to suffer in silence and invoked the Koran, the Muslim bible, as the source of his enlightenment. He appealed even to criminal elements to be prepared for a possible encounter against the whites. He told them to be in the forefront of the struggle and drew the loudest cheers. Malcolm X was the opposite of Dr. Luther King, who espoused peace. If King was a rebel, X was a revolutionary who hated white Americans, no matter who they were. They had only two similarities, or maybe three.

They were both blacks, both supported civil rights and liberties, and both were fiery speakers and staunchly independent-minded. Later, they were both to die in assassin’s bullets. The speeches of Malcolm X were fiery from beginning to end – and his speech on the house and field Negros were no exception. At the end of his speech, he once again stoke the fire of what he claimed to be 400 years of slavery and discontent by a call to arms, urging all blacks not just in America but across the globe to rise in arms against white America.

His speech was always laden with hate and bigotry, urging everyone to take arms in the guise of self-defense. His humor, while evident and indeed funny, was lost in the mood of his message, comical yet contemptuous. While his premises were sound, it appeared that his conclusion was not. This writer believes any call for violence is unjustified when the other party shows a sincere desire to listen and understand the concerns of the opposite camp. Malcolm X’s insistent calls to arms were valid only when white America refused to talk. When

it expressed its desire to settle matters over a negotiating table, then Malcolm X’s revolutionary actuations were no longer valid and, therefore, inconsistent with our nature as rational human beings. Moreover, there was no need to draw a wedge between the home negro and the field negro if they were both willing to listen and understand what the other party has to say. So, what is wrong if the house negro is used by white America to sound out the field negro for a possible peace talk. To sustain peace in the United States, all parties involved in the conflict should discuss the issues in a civil manner, rather than fight over it in

the battlefield. It was enough for Malcolm X to explain the distinction between the house Negro and the field Negro, but debasing one over the other was outright uncalled for, uncivil, and a threat to peace. The speech was far from neutral and simply being informative. It was racism seen from other end. It had Malcolm X’s signature all over it for his unequivocal posture over racism, self-hate, and community empowerment taken to an extreme that is too obtrusive for complacency and comfort. This former “ghetto youth” is a dangerous icon for today’s rebellious youth.

The House Negro and the Field Negro. (2017, Apr 14). Retrieved from https://studymoose.com/the-house-negro-and-the-field-negro-essay 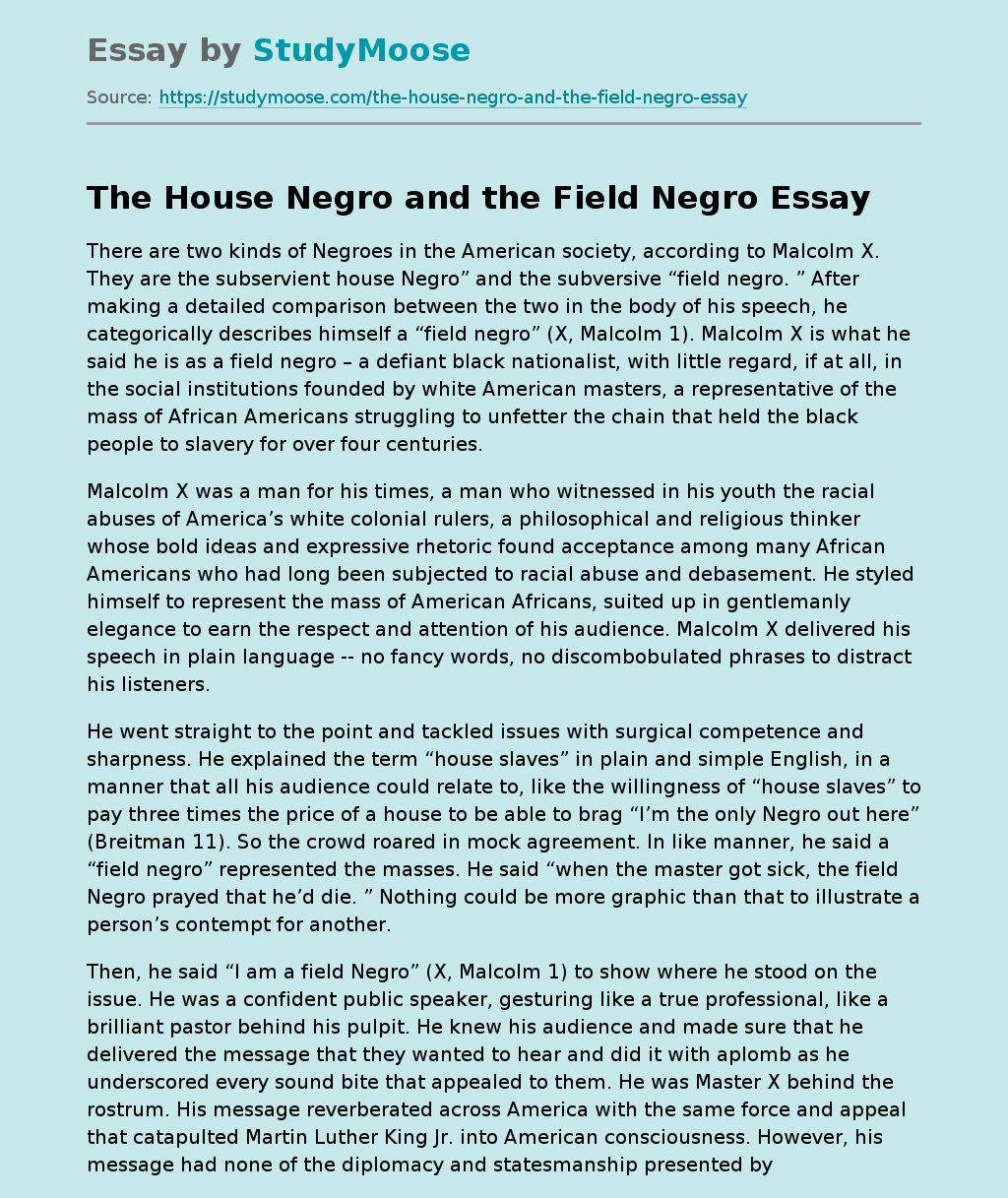