The life of the street artist is, by necessity, one of anonymity. In many of the world’s cities, the most noticeable and breathtaking pieces of art aren’t created by world-renowned talents. They are created by the unknown street artist under cover of darkness. We never see them and they are known only by their tagging pseudonyms. Banksy is a British graffiti artist, political activist, film director, and painter. It has been said, Banksy “was born in 1974 and raised in Bristol, England.

Don't use plagiarized sources.
Get Your Custom Essay on Banksy-Graffiti Art Just from $13,9/Page

The son of a photocopier technician, he trained as a butcher but became graffiti artist.

Style Banksy began as a freehand graffiti artist in 1990–1994 as one of Bristol’s DryBreadZ Crew (DBZ). He was inspired by local artists and his work was part of the larger Bristol underground scene. From the start he used stencils as elements of his freehand pieces, too. By 2000 he had turned to the art of stencilling after realising how much less time it took to complete a piece.

He claims he changed to stenciling while he was hiding from the police under a rubbish lorry, when he noticed the stenciled serial number.

Banksy’s stencils feature striking and humorous images occasionally combined with slogans. Subjects often include rats, apes, policemen, soldiers, children, and the elderly. Asked about his technique, Banksy said: I use whatever it takes. Sometimes that just means drawing a moustache on a girl’s face on some billboard, sometimes that means sweating for days over an intricate drawing. Efficiency is the key. Stencils are traditionally hand drawn or printed onto sheets of acetate or card, before being cut out by hand.

Because of the secretive nature of Banksy’s work and identity, it is uncertain what techniques he uses to generate the images in his stencils, though it is assumed he uses computers for some images due to the photocopy nature of much of his work. He mentions in his book, Wall and Piece, that as he was starting to do graffiti, he was always too slow and was either caught or could never finish the art in one sitting. So he devised a series of intricate stencils to minimize time and overlapping of the colour.

Banksy once characterised graffiti as a form of underclass “revenge”, or guerilla warfare that allows an individual to snatch away power, territory and glory from a bigger and better equipped enemy. Banksy sees a social class component to this struggle, remarking “If you don’t own a train company then you go and paint on one instead. ” Banksy’s work has also shown a desire to mock centralized power, hoping that his work will show the public that although power does exist and works against you, that power is not terribly efficient and it can and should be deceived.

Banksy’s works have dealt with an array of political and social themes, including anti-War, anti-capitalism, anti-fascism, anti-imperialism, anti-authoritarianism, anarchism, nihilism, and existentialism. Additionally, the components of the human condition that his works commonly critique are greed, poverty, hypocrisy, boredom, despair, absurdity, and alienation. Although Banksy’s works usually rely on visual imagery and iconography to put forth his message, he has made several politically related comments in his various books. 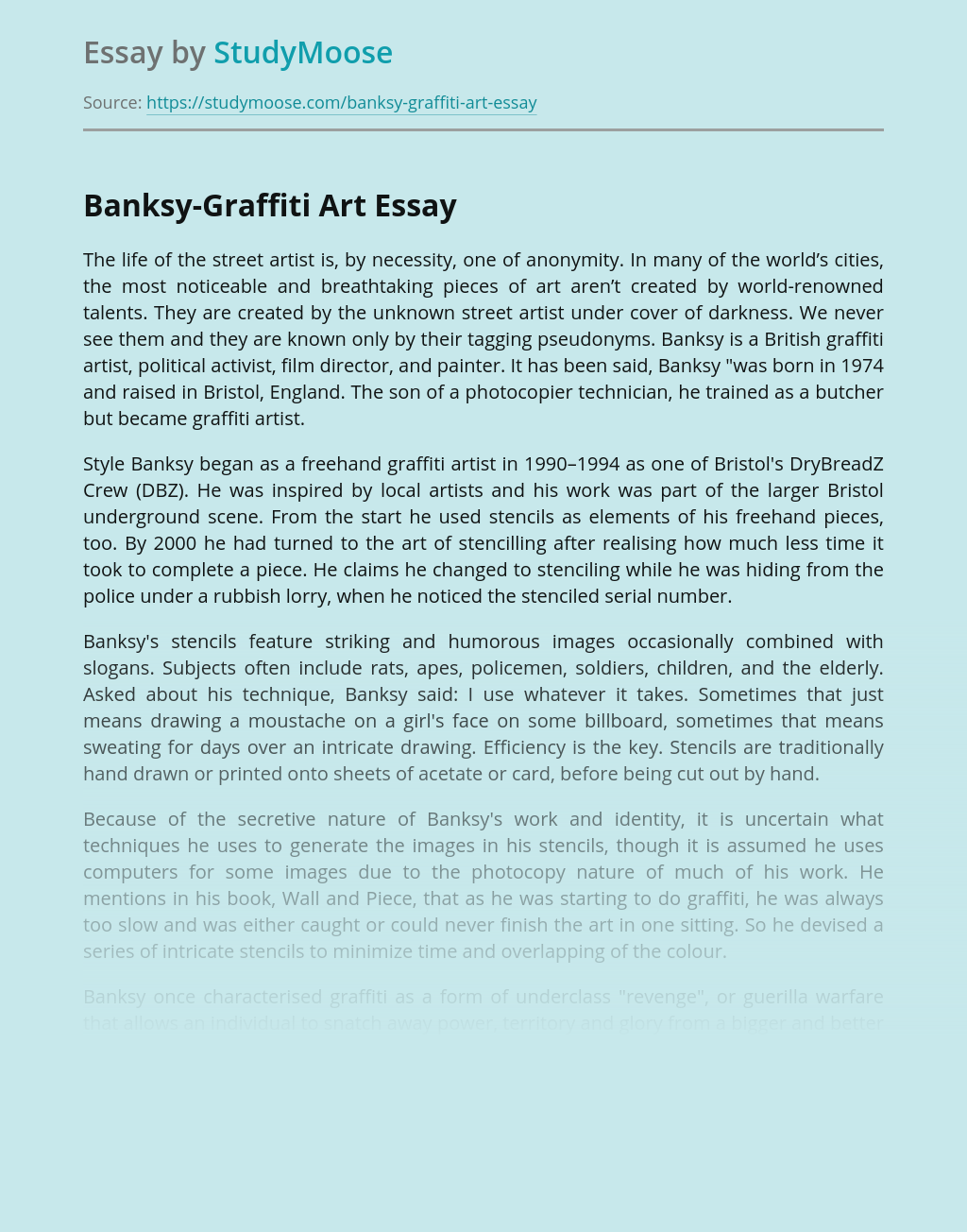 This lab was designed to show how caffeine affected the heart rate of daphnia after exposing them to different concentrations of caffeine for ten minutes. Caffeine is a stimulant, which, in humans, causes heart rates and blood pressure to increase. Its effects range from mild alertness to heightened anxiety and body tension. We wanted to... VIEW ESSAY

To “explore the darkness of man’s heart” is one of the key themes in William Golding’s novel Lord of the flies. As the boys on the island regress from well-behaved, well-mannered children aching for rescue to cruel, bloodthirsty hunters who have no desire to return to civilization, the boys naturally lose their sense of innocence... VIEW ESSAY

If ever there are two opposite themes offered in the telling of one tale, it is in Herman Melville’s short story, “Bartleby the Scrivener”. As his perspective swings between the objective and subjective, so swings the theme from comedy to tragedy. Regardless of the two perspectives from which Herman Melville relates the story of Bartleby,... VIEW ESSAY

Greek mythology is a religion filled with myths and legends used to tell stories that explain how some things came to be or to teach lessons. In Greek mythology, Artemis is a very popular goddess with many traits and attitudes therefore there are many myths regarding her in particular. Artemis is the goddess of the... VIEW ESSAY