Aurora Borealis in the Upper Atmosphere

The Aurora Borealis is a beautiful display of lights created by nature that appear in the night sky. “Aurora Borealis”, the Latin name of the aurora of the northern hemisphere, means the red dawn of the north. The name comes from the famous Italian scientist Galileo Galilei who, among other things, studied the lights around the year 1600. In Rome, were Galileo was living, the red color dominates, but the most common color is actually greenish-yellow, which I will cover later in the presentation.

Don't use plagiarized sources. Get your custom essay on
“ Aurora Borealis in the Upper Atmosphere ”
Get custom paper
NEW! smart matching with writer

The Vikings in the year 700-1000 called it simply “northern lights,” and in early England they called it “The Merry Dancers” referring to the way the aurora moves.

The amazing occurrence of the aurora actually starts high above the earth’s atmosphere. The sun emits a continuous stream of ionized gas during its solar flares. This gas consists of electrons, protons and helium nuclei. The stream of gasses leaving the sun is known as the solar wind.

As the solar wind approaches Earth, the particles are influenced by the Earth’s magnetic field and are guided toward oval zones around the magnetic poles. The solar wind particles then collide with air molecules in the upper atmosphere. The collisions impart energy to air molecules, primarily oxygen and nitrogen, and cause them to emit light, called the aurora.

The display of lights occurs only above altitudes of 80 kilometers and occasionally above 500 kilometers. The average altitude is between 110 and 200 kilometers. Due to the nature of our magnetic field, the aurora can only been seen in certain parts of the sky. The northern lights exist in an oval shaped area called the aurora oval, and this oval rotates with its center in the geomagnetic north pole. The size of this oval varies on an hourly basis with the amount of incoming solar particles. The best observation sites of the aurora borealis are underneath the oval where there is the most geomagnetic activity. Geomagnetic energy is measured in Kp index, which is a scale from 0 to 9. A high Kp indicates a higher chance of auroral activity. One usually needs a Kp of around 3 to be capable to witness an aurora.

The oval usually occurs over northern parts of the Nordic countries, including all of Greenland and Svalbard, northern parts of Alaska, Canada and Russia. Here one may observe northern lights 90% of the time, which is almost every clear dark night. Though auroras occur all day, the day-side aurora has much weaker light than the night-side auroras. Strong daylight also outshines the day-side aurora, so you will have to observe the aurora during night- usually in the hours around midnight. Further down south observation time decreases rapidly as one reaches the outskirts of the aurora oval. Though the oval usually stays high in the Northern Hemisphere it does have capabilities to reach parts of the southern United States. On November 6th, 2001, it reached down to Texas, and once every 200th year it goes all the way down to the equator.

After years of recording the aurora, one has discovered that February, March and October enjoys a little bit more “aurora time” than other months, although this doesn’t mean spectacular displays won’t occur during other months. Auroras are more frequent late autumn and early spring. Brilliant auroras often occur at 27-day intervals as active areas on the Sun’s surface face Earth during its 27-day rotation cycle. Also, the sun has an eleven year sun spot cycle. Every eleventh year the number of spots peak and the number of solar particles thrown out into space increases dramatically. Aurora activity remains high one to two years after this event, which is called Solar Maximum. We had solar maximum around new year, 2001, and the next is expected to occur around 2011 or 2012.

These lights come in a variation of colors. The Sun radiates all visible colors, which is why sunlight appears white. The spectrum of visible light associated with the aurora is much narrower. The aurora is caused by particles of the solar wind colliding with atmospheric atoms and ions. The atmosphere consists mainly of nitrogen and oxygen, which when hit, emits characteristic colors. The colors that these gasses emit are green, red, bluish, and yellow. There are also seven differentiations in the shape that the auroras will take: Homogeneous arc, arc with ray structure, homogeneous band, band with ray structure, curtains, rays, and corona. These different shapes and colors form one of the earths greatest phenomenon’s that to this day continue to boggle the mind of scientists and everyday society.

In the early 20th century, auroral research focused on light emission, altitude, distribution and color. Today, scientists strive to understand the processes that produce the various forms of the northern lights and attempt to explain their changes in time and space. Scientists are especially interested in the effects of solar activity on the Earth’s near-space. General interest in possible global climatic change has increased in recent decades. Because atmospheric conditions in the altitudes of the aurora appear to have a long-term effect on weather, auroral research has received heightened attention.

Aurora Borealis in the Upper Atmosphere. (2016, Jun 19). Retrieved from https://studymoose.com/aurora-borealis-in-the-upper-atmosphere-essay 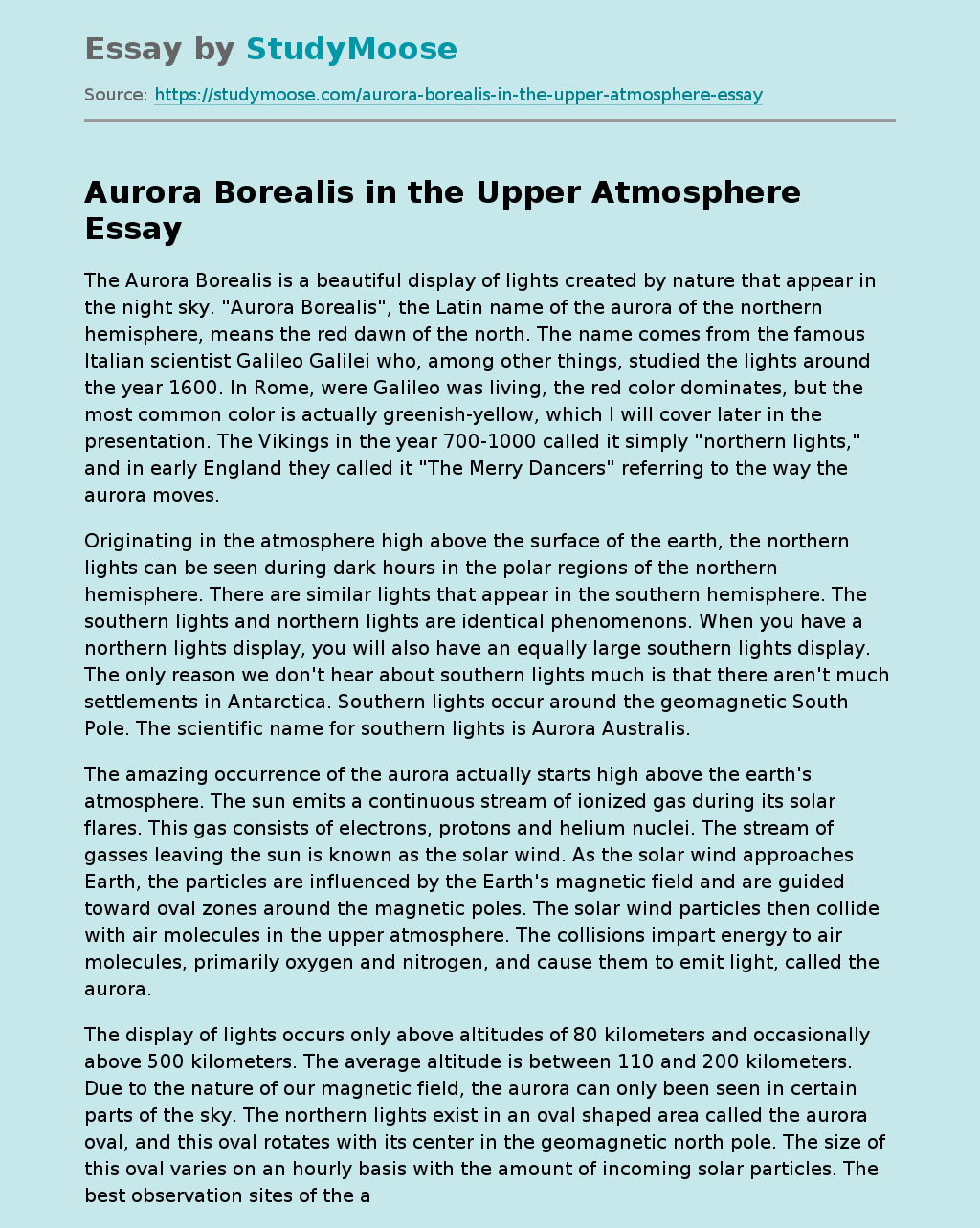