Don't use plagiarized sources. Get your custom essay on
“ Traditional And Modern Medicine ”
Get custom paper
NEW! smart matching with writer

Traditional medicine is also used in the Western civilizations but it may sometimes lead to certain health hazards in cases when it is not used appropriately.

The first herbal medicine dates back to the times of the ancient Sumerians who were actually the first civilization which described medicinal uses for various sorts of plants.

The Ancient Egypt was another great civilization which relied a lot on herbal medicine for various purposes. The cultivation and use of certain herbs were even mentioned in the Bible. The first recorded evidence of Ayurveda dates back to the first millennium B.C. The same goes for the oldest Chinese herbal books which were augmented and improved throughout the ages. There were also noted Greek compilers of herbal knowledge and the most renowned ones include Galen, Dioscorides, Theophrastus, Aristotle and Hippocrates.

The most renowned writers from the times of the Ancient Roman civilization include Celsus and Pliny the Elder.

Certain Latin manuscripts were translated into Hebrew, Arabic, Turkish and other languages later on in the forthcoming centuries. The Greek and Roman were a great influence on the Hellenic, Ayurvedic and Spanish traditional medicine. They were also the backbone of all knowledge that Muslim botanists and Islamic physicians had. American folk medicine was directly influenced by certain texts from Germany and Holland which were developed during the 16th century.

Therefore, there are many advantages such as it has less side-effect than Western medicine. One other reason people use traditional medicine is that it has been used for a long time. For example, thousands years ago, people found out to use pharmaceutical plants to cure injured and now people still use it because it is based on the experience of people from a thousand years. Another argument is traditional medicine can protect people’s health for a long time. To explain, it may strengthen and assist the body’s own natural healing process.

For instance, Lingzhi is the name of a traditional medicine that has good effects for people health and can help people stronger or may live longer. In contrast, there are some disadvantages of using non-western medicine. Firstly, traditional medicine is from nature, but also it does not mean it is safe or good for a person’s health. For instance, some leaves of trees may have the advantage is curing people who get injured.

However, they can also have a negative side that made people have headache. Secondly, alternative medicine is not cheaper and faster than other medicine. For example, some modern medicines are made in nature and their effective are four or five times as alternative medicines and also they are much cheaper, such as aspirin, penicillin and analgesic, for example. In conclusion, this essay has highlighted some of the arguments for and against people using traditional medicine.

Because of traditional medicine has been used for long times and help people stronger, it is positive. Conversely, some negatives of using traditional medicine are that it also has side effects that can make people sick and the price is not cheap. The government should find a way to decrease the cost of non-western medicine

Nowadays, modern medicine has the answer when it comes to detecting and treating a large number of different types of medical conditions, especially the ones triggered by bacteria, viruses and other sorts of infectious agents. This was not always the case, as people used to die out of diseases which are now easily curable. Those include whooping cough, diphtheria and smallpox, among others. Traditional medicine methods have been around much longer than the modern medicine and they were an important part of the recorded history.

The most important difference between the modern and the traditional medicine is the way they observe both the health and the diseases. Diseases are biological conditions which are characterized as abnormalities in the function or the structure of certain organs or entire organ systems. Illnesses are completely different because they also involve certain spiritual, psychological and social aspects of an affected person. Modern medicine usually tends to ignore these aspects of a person and that is why most traditional medicine practitioners believe that the art of healing has been lost over the course of the last 100 years. This sort of dissatisfaction led to a significant increase in the number of people who start relying on traditional medicine in order to get rid of their medical problems. All of this occurs in spite of the fact that there is no scientific evidence that traditional methods of treatment may provide one with a satisfying outcome.

There are a large number of people who suffer from a lack of spiritual dimension in their lives. They are unable to connect to some greater meaning and that is one of the main reasons why they often rely on traditional medicine practitioners who may take care of all different dimensions of their lives. These people believe in the fact that one’s wellness and overall health do not rely solely on a successful elimination of some disease inside the human body.

Most sorts of folk and traditional medicine are spread by means of word of mouth throughout communities, families and among individuals up to the point where they get collected. A culture may contain certain elements of folk medicine which are simply diffused among individuals, so it requires some time until all the knowledge elements are gathered together and applied in specific medical situations. The role of each traditional medicine practitioner is defined by three distinct factors. Those factors include the beliefs of the surrounding community, the success of the practitioner’s actions and his or her own beliefs. When a certain type of folk medicine gets rejected by a certain culture it may survive only through belief from temporary believers. Not all elements of a specific culture are successfully integrated into a system, and quite often it may contain many contradictions. 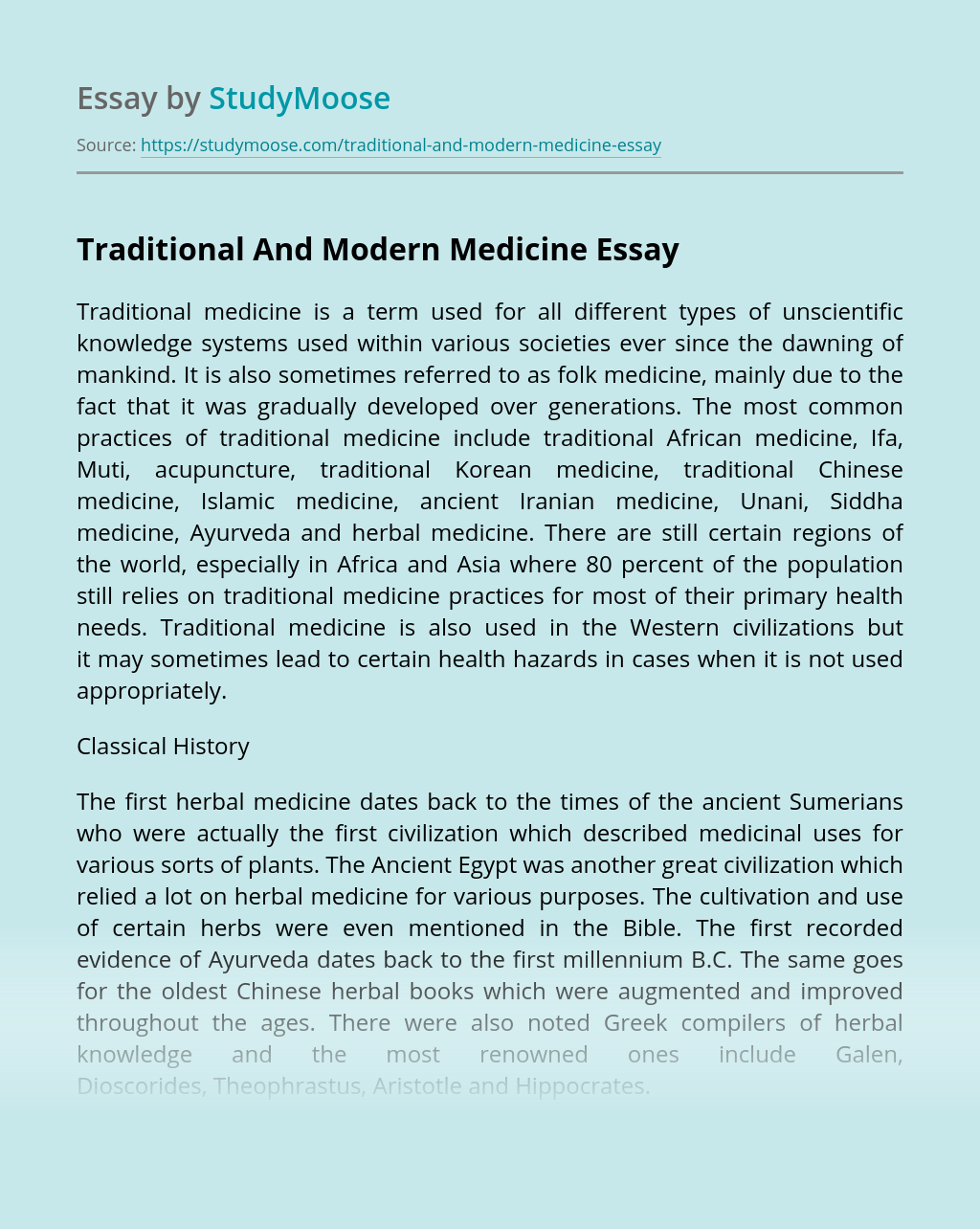