“Macbeth” In The Tragedy of Macbeth by William Shakespeare characters often could not escape the consequences of their choices. The choices that some characters made in the play put them in a position which they could not escape. In most of these cases the character feels remorse for the choice they had made. The characters that I will be concentrating on are Macbeth, Macduff, and Lady Macbeth.

Don't use plagiarized sources. Get your custom essay on
“ “Macbeth” ”
Get custom paper
NEW! smart matching with writer

These characters are the best examples of how characters could not escape their choices in the play. The actions of Macbeth during the play sometimes put him in a situation which he could not escape. An example of this is when Macbeth murders Duncan. After he does it he regrets it and is afraid to think about it. This is shown in the quote: I am afraid to think what I’ve done; look on’t again I dare not.

/(50-51, Scene 2, Act 2) Another example is after Macbeth had Banquo killed and he sees Banquo’s ghost at the table. He goes crazy and starts yelling at the ghost and he realizes that he cannot change what he has done so he tries to ignore it. That same scene Lady Macbeth says: Things without all remedy should be without regard: what’s done is done./(11-12, Scene 2, Act 3)

These examples show how Macbeth cannot escape the choices he made. Macduff’s allegiance to the country of Scotland leads to consequences which he cannot change.

Macduff’s allegiance is shown when he left Scotland and his family to go to England. There he met with Malcolm and started raising a army to overthrow Macbeth. The result of this is the slaughtering of Macduff’s wife and children by Macbeth’s men. He blames himself for their death and he knows he can do nothing to change it. This is seen in the qoute: Sinful Macduff, They were all struck for thee! Naught that I am, Not for their own demerits but for mine fell slaughter on their souls. Heaven rest them now!/(224-226, Scene 3, Act 4) Lady Macbeth cannot escape the consequences of her choices either. She pressured Macbeth into killing Duncan when he did not want to. She also smeared the blood all over the guards and put the daggers in their hands. She went along with the murdering of Banquo and tried to tell Macbeth that he could not change what he had done in the second quote of my second paragraph. All of the choices she made had a huge impact on her life and we see what she has become in the sleepwalking scene. She showed how permanent the killing of Duncan was, in the quote: /Here’s the smell of blood still. All the perfumes of Arabia will not sweeten this little hand./(51-52, Scene 1, Act 5) and in this quote about the murder of Duncan: /What’s done cannot be undone./(70, Scene 1, Act 5)

The choices she made chnaged her life and eventually led to her death. In The Tragedy of Macbeth by William Shakespeare the choices of some characters could not be escaped. Macbeth, Macduff, and Lady Macbeth serve as good examples to show that their choices could not be escaped. In the play the choices these characters made had a lasting impact on their life. In the case of Macbeth and Lady Macbeth their choices led to their death. We all make choices in life, some good, some bad but learn to live with the choices that we make. Either good or bad it does not matter because man can never escape the consequences of his/her choices. 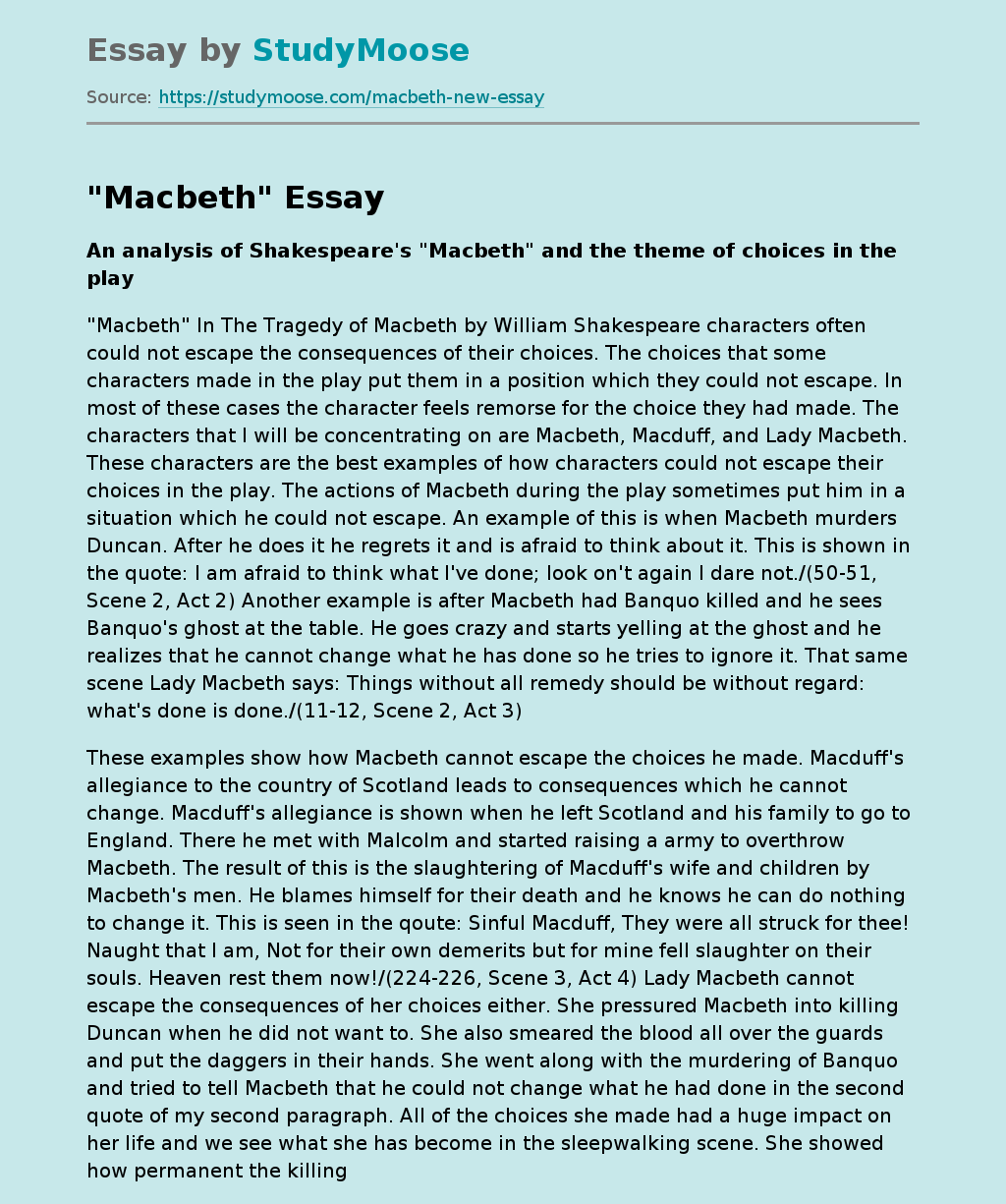