William Shakespeare is one of Britain’s most famous playwrights. He was born in 1569 in Stratford-Upon-Avon. He made his plays available for everyone and wrote them from 1590s to 1600s. His most popular subjects in plays were romance, comedy, murder and historical stories. Shakespeare built his own theatre and named it “The Globe Theatre”, which had no scenery, few props and some costumes.

The audience had to use their imagination most of the time. One of Shakespeare’s most famous plays was “Macbeth” and was ased on the real king in the Middle Ages, taking facts from the life recorded by Holinshed.

Don't use plagiarized sources. Get your custom essay on
“ Christian moral values in Macbeth ”
Get custom paper
NEW! smart matching with writer

He kept most of Holinshed’s story but changed some of it for good drama. In the 1600s Queen Elizabeth 1st enjoyed Shakespeare’s plays, and if anything is popular with royalty then it’s popular with the public, but she later died in 1603. Shakespeare then had to impress the new king, James 1st. He wrote about witchcraft because it interested the king, James 1st had written a book on the supernatural called “Demonologie”.

Rumours have been spread that Shakespeare used real spells on the play so it was cursed, that is why most people always referred to it as “The Scottish Play” when on stage to avoid tragic events. This kind of subject is very controversial; the audience were all fearful churchgoers. To them, the devil and witches were real because witches were burned and drowned at the time so there were many parts in the play to frighten the audience.

In the first scene of Macbeth, the audience isn’t introduced to normal, human characters but witches, which is an instant shock to them.

They appear in thunder and lightning, which signifies that they have supernatural power to control the weather and other natural elements. At the time, the audience feared things they did not understand and extreme weather was seen as God’s anger or the work of the Devil. They can’t except that witches could have power over the weather because they believe in the Natural Order, with God at the top in control. Also, in the play, the witches mention “hurly-burly” which is an old English word for chaos and confusion.

The witches destroy this order and create confusion so the audience lose security and feel vulnerable where they are at the mercy of evil forces beyond understanding. To help create the confusion, the witches speak in riddles; this also means that not all their words can be trusted. “Battle’s lost and won” the witches said and if any battles are present that means that Scotland is not at peace and harmony and evil forces are behind it. Another way that the audience feel more uneasy is the mystery of the witches and they are forced to ask questions like “Why do they want to meet Macbeth? They believed that they could talk to animals or even turn into them themselves, they mention names like “Graymalkin” (a grey cat) and “Paddock” (a toad).

Possibly the most frightening line in the play “Fair is foul and foul is fair” because it destroys the natural order of goodness and evil. It’s very shocking because the witches believe all goodness is bad, which is the reversal or inversion of Christian moral values. The witches seem to cast a spell not only over Macbeth but also on the audience as well because they are speaking in countless rhyming couplets in an uncanny hypnotic tone.

Immediately, when Macbeth meets with the witches, the scene is once again associated with thunder, which adds a massive effect to the drama. This is when there is a first mention of killing in the play when the witches are killing pigs, probably for spells. This is a small hint to prepare the audience for Macbeth killing the king later on in the play. One of the witches tells him about a spell she had put on a sailor’s wife as proof of the power she possesses.

The sailor suffered a “tempest tost”, which takes us to James I, the newly appointed king in Shakespeare’s time, who had survived a storm at sea. The witches were very stereotypical, they had the cauldrons, they could control storms, and they had black cats and could cast spells. Like the number 13 is apparently unlucky to us now, at the time people thought that the number 3 and multiples of 3 had a kind of supernatural characteristic to it. The witches refer to this number quite a lot in this scene.

The audience is shocked by Macbeth’s first words “fair is foul and foul is fair”, the witches had already infected his mind with their language and behaviour. Yet again, there are more stereotypes, the witches having beards but they are females so this must be inhuman. Of course, though, all of the actors were men because they could easily grow facial hair. None of the witches can be trusted because they speak in riddles that don’t make sense, like when they say to Banquo that his future will be “Lesser than Macbeth and greater”. This is more stereotyping because witches can predict the future.

When the witches vanish into thin air, there is most likely a trap door on the stage, which is more stereotyping in acting. Macbeth and Banquo think they are hallucinating, they mention “the insane root”, which could refer to plants like hemlock which poisoned people who thought it was another root vegetable. The future plays with Macbeth’s mind almost immediately, he starts showing signs of obsession and becoming dangerous. The witches’ predictions start becoming true when Macbeth is greeted with Cawdor’s title but Banquo says “What, can the devil speak true? ”

In Act 1 Scene 5, the audience first meets Lady Macbeth and are shocked to find out that in Macbeth’s letter to her he calls her his “dearest partner of greatness” which would make her his equal. The women at that time were there to serve the men and they were definitely not on equal terms. But it also seems that Lady Macbeth is not in complete control of the relationship. She is determined that he will become the king; she says that “shalt be what thou art promised”, which is very shocking and confusing for the audience because they have no idea who controls who.

Lady Macbeth is like the fourth witch in this play but she is worse than the others because she is continuously by Macbeth’s side, leading him towards his “future”. She says “I fear thy nature; it is too full of the milk of human kindness”, she recognises the goodness and innocence in him but she sees it as a weakness. She believes that he is not filled with the evil that comes with his ambition, the audience see her as a threat to his goodness. She says “chastise with the valour of tongue”, which means that she will persuade him to murder by nagging him about it so much that he will have to do it to shut her up.

She is very excited and begins to think about her evil plans when the messenger comes to say that the king is on his way to be their host, she says “he brings great news” only because she cannot wait to see the king dead. The most shocking part of the scene is when she says “Unsex me here, and fill me from the crown to the toe top-full of direst cruelty” because that means that she is giving her body over to the evil forces of darkness. She wants the Devil to take away any gentle, feminine side from her so that she can be truly inhuman. 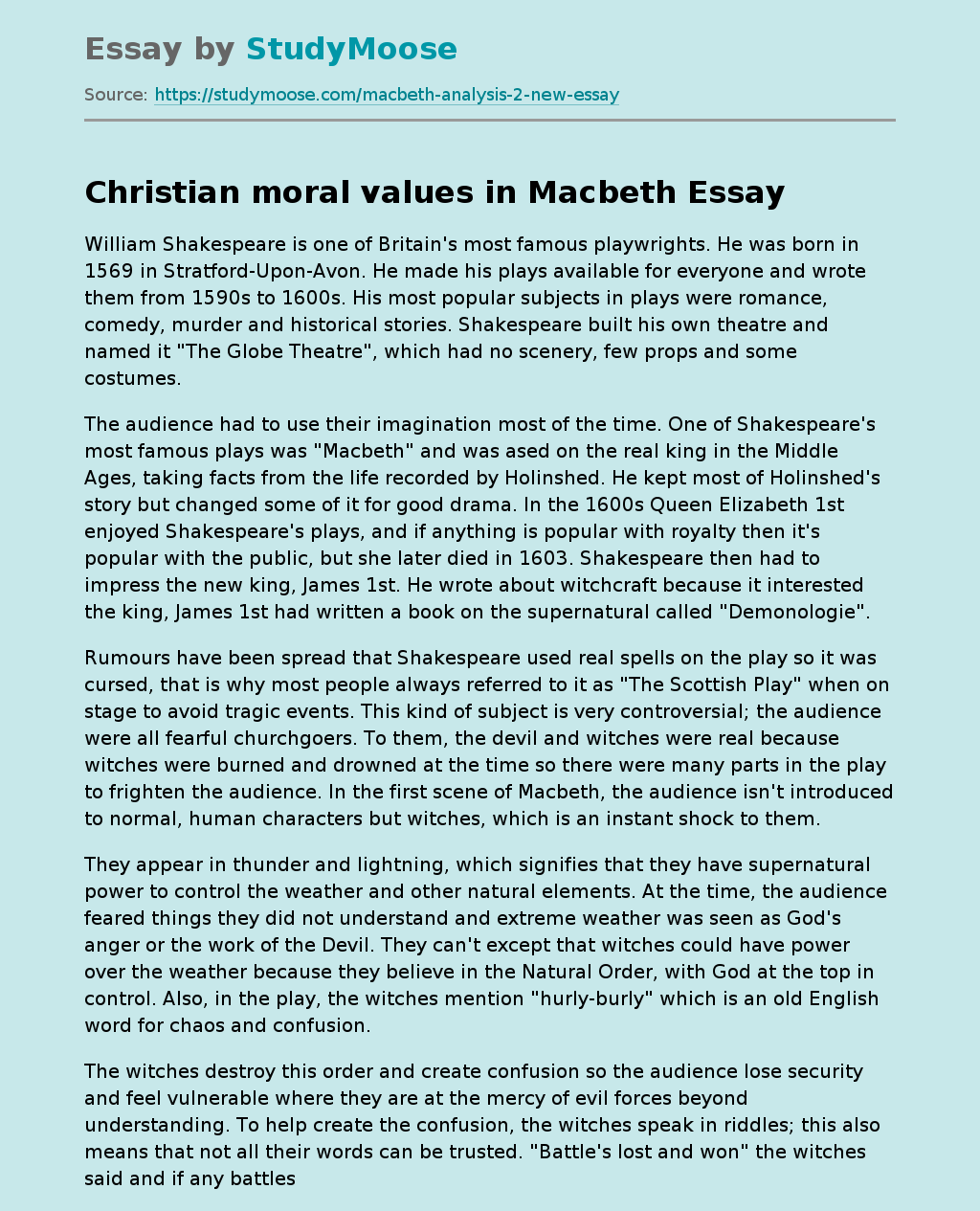