Moral Values in Bless Me Ultima

The conscious of children is based on the influence of their surroundings; their notions of good and evil are the result of the moral atmosphere they breathe. In the novel Bless Me, Ultima the main character Antonio is exposed to good and evil. He is young and never really was exposed to evil since he is always home and safe away from it. Antonio is affected by the actions of good and evil throughout the book. The first time Antonio encountered evil was Lupito’s death.

Don't use plagiarized sources. Get your custom essay on
“ Moral Values in Bless Me Ultima ”
Get custom paper
NEW! smart matching with writer

“I turned and ran.

The dark shadows of the river enveloped me as a race for safety home…The horror of darkness had never been so complete as it was for me that night. ” (pg. 22) Home is seen as the safest place for Antonio. He knows he is going to be comforted by Ultima or his mother and it’s the first place he thinks of going. Lupito is playing the part of evil. That is how Antonio sees is because all the men in town are after him” I prayed that he would listen to Narcisco and that the angry and frustrated men on the bridge would not commit moral sin” (pg.

Proficient in: Bless Me Ultima

The Second important encounter is when Florence dies. “It was a warm day. I felt the sweat cold on my face and arms. The sun Glistened on the wide waters of the lake. ” (pg. 239). Antonio knows something is wrong when he sees the other boys screaming and shouting.

At this point Antonio has confronted evil many times but this is an important event. After other occasions he has matured quite a bit and is growing into understanding life a little more. “It is god who has sinned against me! ’ his voice thundered, and we fell back in horror at the blasphemy he uttered. ” (pg. 213)Florence for a while is seen as evil. He was one of the people who in a way corrupted the way Antonio thought and his beliefs. Florence isn’t aware he did such thing but Antonio stands strong with his religion. When Florence dies, he isn’t evil anymore.

He is just a child that needed help in guiding him. The death affects Antonio for weeks and Ultima always seeks a way I how to comfort him. The last encounter in the whole novel is Ultima dying. “Ultima-’ I wanted to cry out, don’t die, Ultima. I wanted to rip death away from her and the owl. ” (pg. 260) Since birth, Antonio is very attached to Ultima and the first day he met her as a young man she knows there would be something special between them. Shanking her hand he as well right away knows that there is something unexplainable.

Ultima is the one who shows and guides him into whatever he needs to know since no one ever takes the time to do so. “.. and after mass we would take her body to the cemetery in Las Pasturas for burial. But all that would only be the ceremony that was prescribed by custom. Ultima was really buried here. Tonight. ” (pg. 262) Ultima is the good who people make her seem evil. Others try making Antonio believe that she isn’t a good person but him and his family knows for a fact that it isn’t true. Tenorio is the Evil throughout the book.

His stubbornness doesn’t let anyone get through to him and gets others to think that Ultima isn’t good. In the end she is exposed to everyone but there is nothing that could be done since she has passed away. Antonio is devastated but has grown. There is nothing that could be done. Good and evil stream throughout the novel. Antonio is affected by events that don’t necessarily include him. Lupito’s death, Florence’s death and Ultima’s death all cooperated in changing Antonio. He is a strong young man that before is ignorant and wasn’t exposed to events in life.

Moral Values in Bless Me Ultima. (2021, Nov 12). Retrieved from https://studymoose.com/moral-values-in-bless-me-ultima-essay 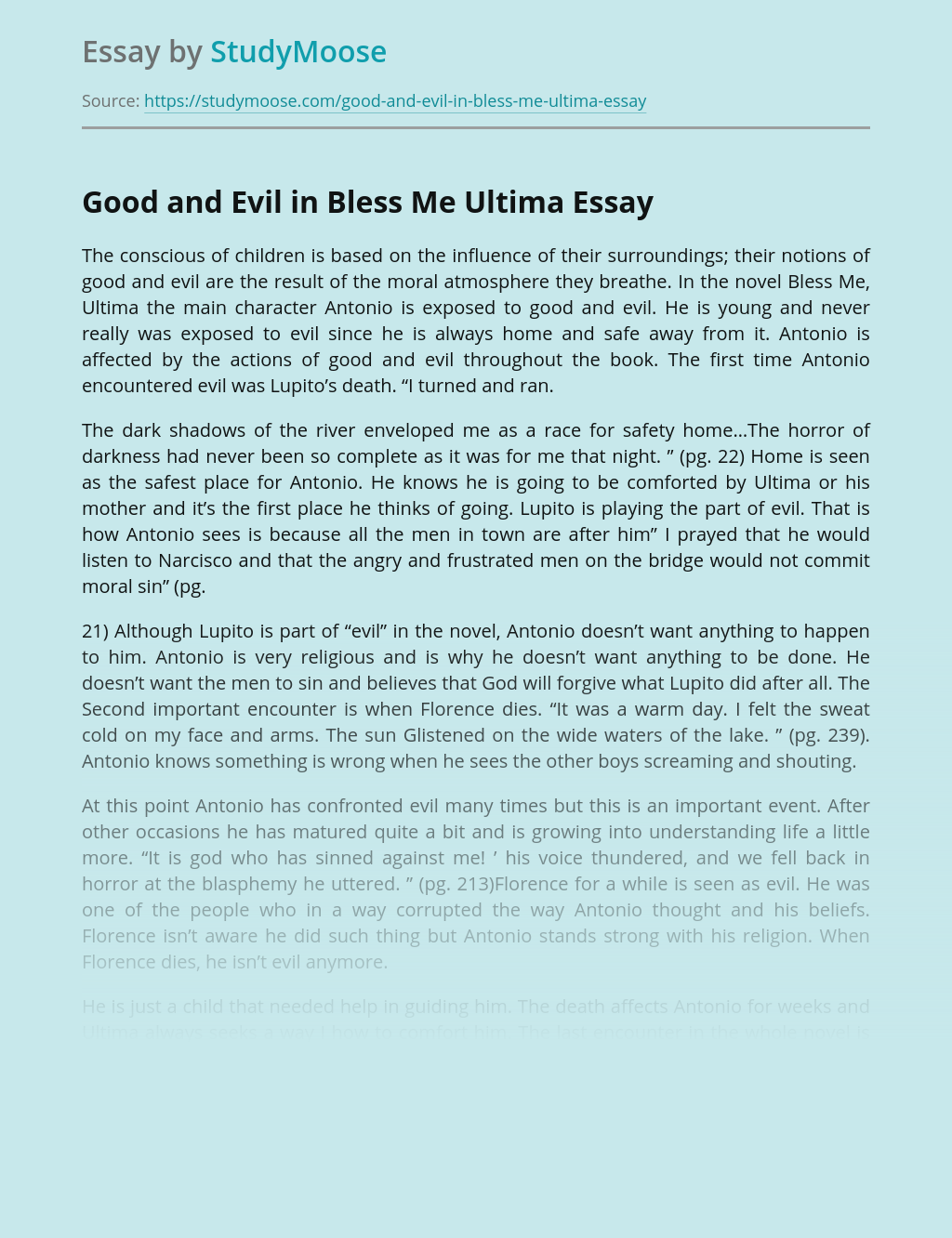