As advanced civilizations developed throughout the world, a common trend was observed regardless of time and location. That trend was the development of a law and government. Each civilization developed some form of law, the Babylonians had Hammurabi’s Code, the Hebrew had Mosaic Law, and the Greeks had the Draconian Law. Although these were all great forms of law, one of the most important advances in legal history was the Romans and their development of the 12 Tables of Roman Law.

Don't use plagiarized sources. Get your custom essay on
“ 12 Table of Roman Law ”
Get custom paper
NEW! smart matching with writer

The 12 tables of Roman law reflect the social structure, government, and moral values of the Roman Empire.

The 12 tables of Roman law provide an ample amount of evidence to support the idea that the Romans had a distinct social structure. When one analyzes the 12 tables of Roman law it is clear that the romans perceived women, slaves and even children to be inferior beings, which meant they were at the bottom of the social hierarchy. Table 5 Law 1 is one example of how the women were socially viewed in Roman society.

Table 5 Law 1 states “Females should remain in guardianship even when they have attained their majority”.

1 This meant all females immediately had to transfer from the guardianship of their fathers to the guardianship of their husbands. By the same token, women also did not have any control over the wealth or land that the family owned, which makes it evident that they were not trusted or respected as independently acting individual or as equals with the males of society. Additionally, women had no control over the fate of her children.

This is made evident based off the information given in Table 4 Law 1 where it states, “A dreadfully deformed child shall be quickly killed.”

2 The law does not set a clear standard as to what is considered a deformity therefore, the decision was always left up to the male to decide if a child should be killed or not. The ideals and moral values of the Romans also can be found in the examination of the 12 tables of the Roman law. The romans were a very ruthless civilization. This ruthless mindset is most evident in Table 4 Law 1 where it states “A dreadfully deformed child shall be quickly killed”3 The romans believed that once a young boy reached adulthood, it was his duty to serve in the military.

Therefore, if a boy was born with deformities or not perceived as strong enough to become a solider he was killed. Another ideal or moral value that is evident in the 12 tables of Roman law is the belief of honoring your word and repaying debts. Several of the roman laws address the summoning of one to court. Table 1 Law 2 states “if he shrinks or runs away let the summoner lay hands on him”4. This law gave the summoner the authority to physically punish the summoned if he decided to run or hide when called to come to court.

From this law and others like it in Table 1, it can be implied that the Roman civilization valued integrity and honesty. The establishment of a strong government is also evident from the 12 Tables of Roman law. The Law of the Twelve Tables was the ancient legislation that stood at the foundation of Roman law. Although the 12 tables of Roman law were not perfect, due to its early time of creation, they still needed a strong central government to enforce this legislation.

The many laws about landownership in the Tables also make it very apparent that the government was greatly influenced by the opinions of local wealthy landowners. This means that the early Roman government was most likely an Oligarchy.

Since they were an Oligarchy the parliament and landowners met together to make important decisions for the Roman Empire. In conclusion, the 12 table of Roman law had a great effect on the social structure, government, and moral values of the Roman Empire. The impact that these 12 Tables have had on future legislations and the Roman Empire is profound. 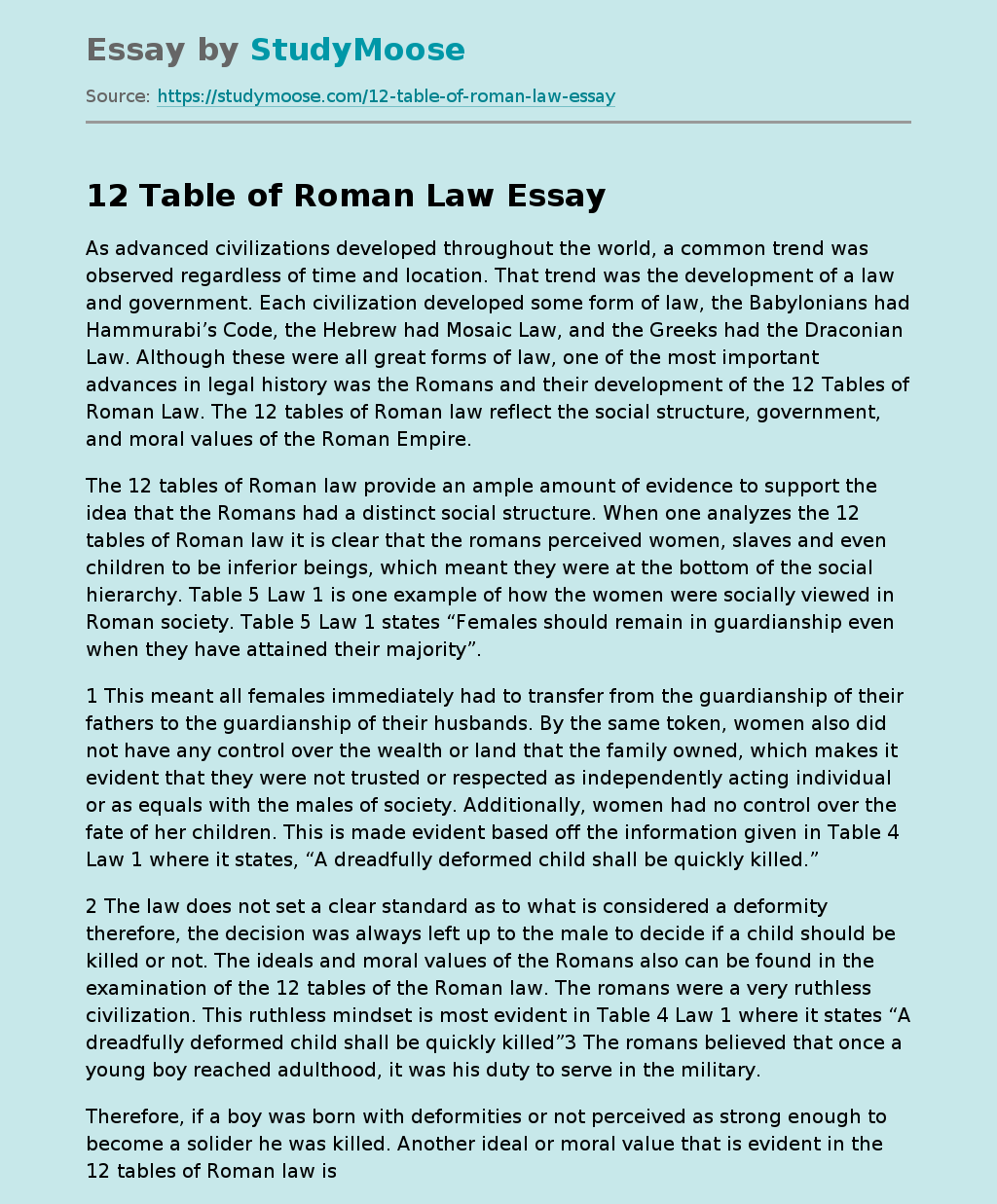