Human beings enjoy the maximum freedom and power for governing their habitat and environment. This power sometimes enables them to misuse the resources Materialism has led us to a degradation in our moral values.

India is the most ancient civilization. Vedas were written in India. Buddha got divine knowledge here. We are proud of our rich cultural heritage but today we have forgotten those ideals, values and principles which were so dear to our ancestors.

Take for example, the concept of joint family.

Don't use plagiarized sources.
Get Your Custom Essay on Degradation of Moral Values in Indian Society Just from $13,9/Page

Today, no young couple prefers a joint family. We do not want to be grateful to our parents. Rather, we want to disown them.

The next most prominent degradation in our moral values reflects itself in the form of corruption. In India, corruption is prevalent at all the levels and the irony is that even if we accuse that they are guilty, they remain supreme. These developments are not good for the national economy and the moral conditioning of our younger generations.

The free market economics has added fuel to the fire. When we find that everybody is corrupt. So, we waste no time in becoming the part of this corrupt system.

Another steep decline in moral values manifests itself in the form of our poor educational system and teaching methodologies. In fact, the poor educational system in all the parts of the nation has led to poor moral values in the society The students do not respect their teachers. Copying during the examinations is a common practice. Best of the brains are drained to the West because the offers are tempting- and nobody misses the opportunity if offered once. Further, in Indian society, respect for elders is taking a backseat in the name of modernization. Our cultural values have taught us to respect our parents and help them during the times of their helplessness. However, the growth of nuclear families has led to complete ignorance of parents and elders. We never approve of such a deformed social and cultural chaos in our nation that was known for her warmth and family traditions for over several hundred centuries.

Criminals should be banned from politics and should be treated with an iron hand if they try to disturb the democratic norms laid down by our Constitution… The Election Commission has done well by forbidding candidates with criminal records from fighting elections.

In our schools, the traditional Indian values must be taught and reinforced. Schools can change the face of our society.

The concept of joint families must be promoted among the young couples. This concept would enable them to take fruitful guidance from their elders. Education should be imparted according to Western norms. However, Indian values must also be enforced so that our children remain in touch with their roots. 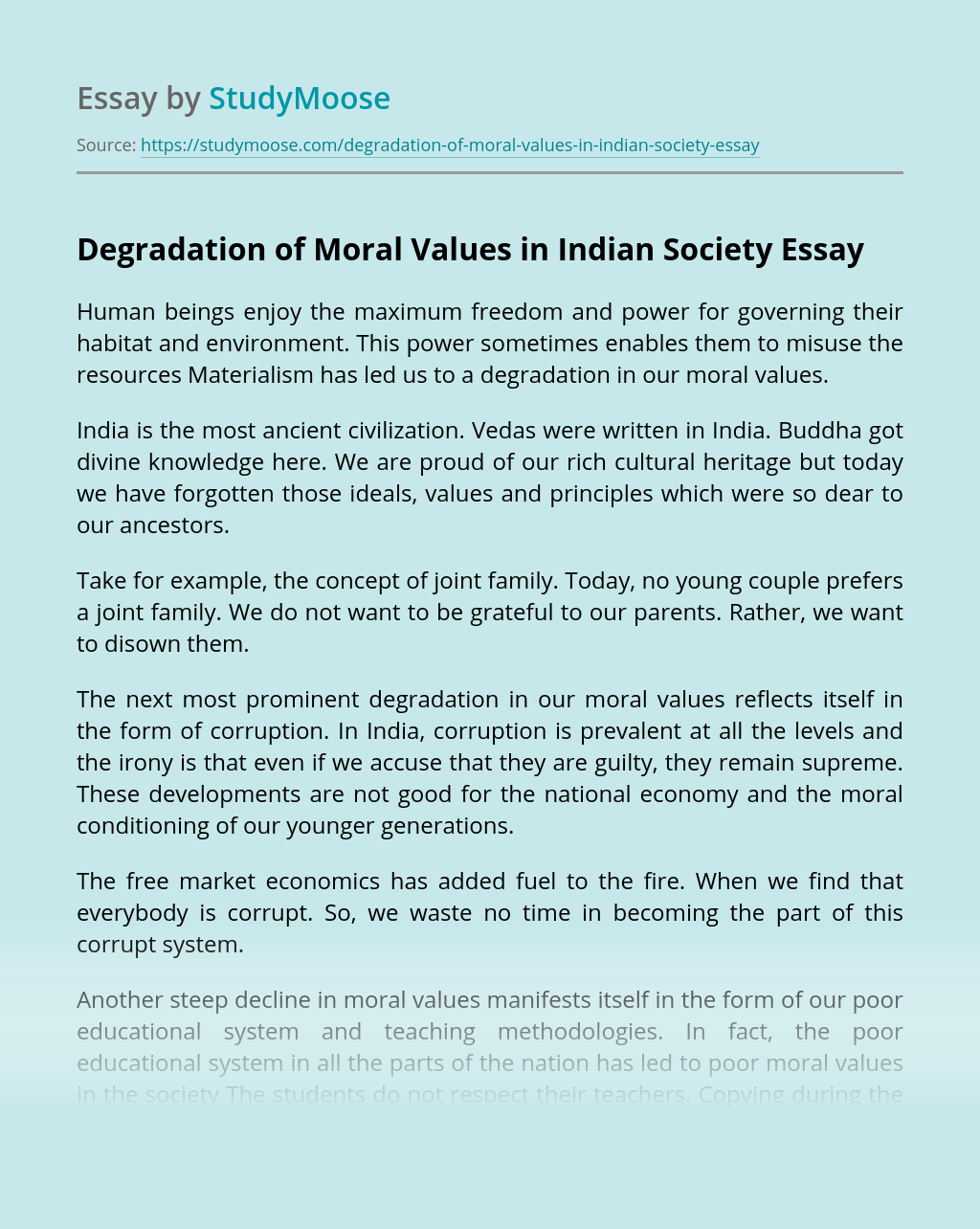 The cultural evolution experienced by Western and non-Western people can suggest the different degrees at which they were able to cope or deflect changes. Different people from different cultures had their own way of imposing their own culture as world standard, or, own way of keeping their natural heritage despite the pressure from more advanced...

Shakespeare reveals a high level of remorse in both plays by raising the emotional turmoil sensed by Macbeth and Othello. The climax of this repentance highlights the mindset of distress of both of the main characters, and is followed by a significant conclusion. Shakespeare presents Macbeth as regretful by portraying his desire to be king...

1. Queen Liliuokalani was the first and only reigning Hawaiian queen. Imperialism is the policy by which stronger nations extend their economic, political or military control over weaker nations. William Seward was the Secretary of State under presidents Lincoln and Andrew Johnson he purchased Alaska from Russia in 1867. Pearl Harbor was the Hawaiian port...