As Europe entered the eighteenth century a new emphasis was placed on developing colonies, earning money though taxes and a new system of justice and law. Great monarchs such as Peter the Great of Russia, and Louis XIV of France established many strategies in order to keep up with the rest of Europe. Both monarchs had similar goals such as to control the noble class, possess a professional army, and their views on religion. Peter’s goal to expand his empire through the use of his army, his tolerance of religion, his role as a “man of the people”, and his control of his nobles through taxation, differed from Louis non-tolerance of religion, control of his nobles through attendance at Versailles, use of an army for protection, and his divine right to rule.

Turn in your highest-quality paper
Get a qualified writer to help you with
“ Louis and Peter Compare Contrast ”
Get high-quality paper
NEW! AI matching with writer

Louis and Peter had similar goals such as to establish a large professional army within their empires. These armies differed from armies in previous centuries because they contained highly trained men with advanced and mature technology, as opposed to the armies from earlier times that were composed of peasants and low technology artillery.

Although each monarch had a large professional army, the reasons for why these armies were so important to each empire differed. Louis needed a strong army to protect his borders from enemies. Since France is in the center of Europe, and is bordered by major empires such as England and Spain, it was essential to have an army that could protect France from these threatening neighbors.

Peter needed an army in order to expand his young growing empire. Louis came to power with an already developed empire, which had already conquered many lands; whereas Peter had to start from scratch and begin to conquer new lands. A large army was crucial for Peter so that he could invade and conquer new territories for Russia. Without a strong and powerful army, Russia would not be able to grow and expand as an empire, and end up being isolated to the West. Both empires needed a strong professional army, but their reasons for the army differed.

Another main goal of both monarchs was to control the noble class. Managing the nobles was vital because they were a large threat to the monarchs themselves because they threatened the power of the monarch. Controlling the nobles would ensure that both monarchs would contain absolute power themselves, and maintain order within their empires. The strategies used by both monarchs eliminated the nobles chance to overthrow them. Both Louis and Peter differed in the way that they managed the noble class. Louis spent an enormous amount of money to build the palace of Versailles, where he resided. Versailles was not just a representation of France’s wealth, but a place where nobles every year were ordered to live temporarily.

By mandating that every noble was to live with the King in Versailles, the nobles power was neutralized. Louis now could watch over the nobles and take isolated them from their homes and people, which made it more difficult to rebel against the king. Peter, who was still working to develop his empire attempted to control the nobles by enforcing a tax on any noble who wished to have facial hair. By doing so, Peter hoped to emphasize his power of the nobles, and that the monarch determined how people were meant to live. By mandating this tax Peter also spread the idea of conformity within the empire, which is another device in controlling the people. To both Louis and Peter controlling the nobles was necessary, but the strategies in which they controlled them differed. (40 minutes)

The role of religion greatly affected both empires as well. Religion was used as a way to control and unify both empires. Louis, who belonged to the Roman Catholic Church, believed that he possessed the divine right to rule. He believed that God had chosen him to rule, and therefore if someone committed a crime against Louis, or the French government, they had sinned against God. His beliefs were projected to the people of France and influenced them as well. Peter was working solely on expanding his empire and working hard to make sure there was no revolt within the empire. For this reason, he was tolerant of religion and considered himself a “man of the people.”

Peter and Louis were both important rulers during the eighteenth century. While their large professional armies, necessity in controlling the nobles, and the large impact of religion on their empires was the same, the reason for their armies, the ways in which they controlled their nobles, and their differences in religion all differed. The changing times of Europe because of new technology, and advancements in finance contributed massively to these developments of these two principal empires. 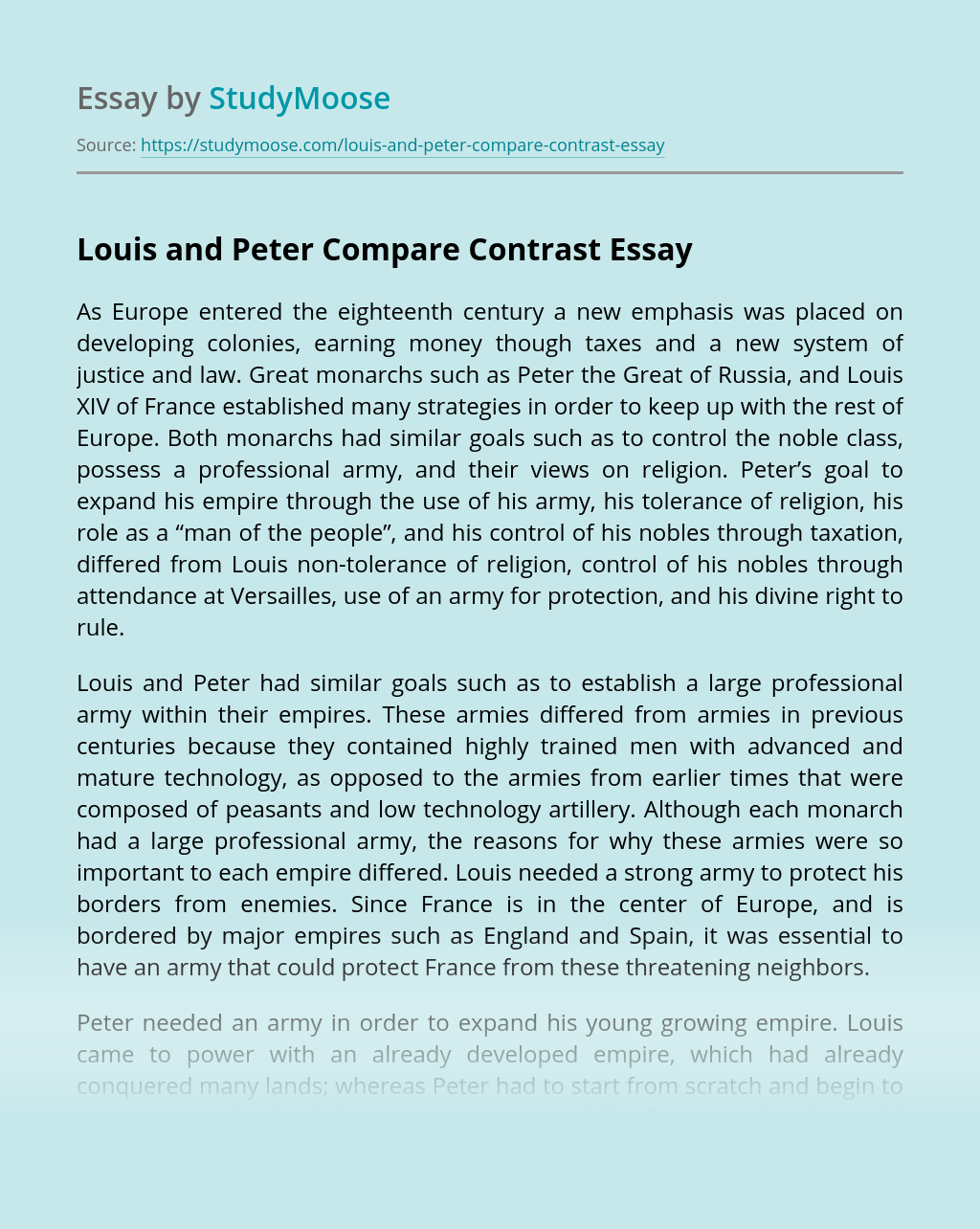 Turn in your highest-quality paper
Get a qualified writer to help you with
“ Louis and Peter Compare Contrast ”
Get high-quality paper
Helping students since 2015
Stay Safe, Stay Original