Lord of the Flies Essay on Pathetic Fallacy

“This is our island. It’s a good island. ” (Golding 35). Contradictory to this quote, nature is never to be claimed by man, nor is always good- it is man that is controlled by the dynamically changing nature. In Lord of the Flies, William Golding reveals the nature’s beauty and power by personifying the island into a divine sentience that both rewards and punishes civilization and savagery. In allowing the natural elements to influence the boys’ behavior, Golding uses the relationships between the individual boys and the island, with consequences for their actions.

Don't use plagiarized sources. Get your custom essay on
“ Lord of the Flies Essay on Pathetic Fallacy ”
Get custom paper
NEW! smart matching with writer

The benevolent and generous side of the island’s nature is seen with Simon, the most civilized and humane individual in the group. When Simon walks alone through the forest in chapter 3, his delicate and admiring attitude towards nature is immediately rewarded. When Simon is rushed by the littluns who were frustrated by unsuccessful attempts at raiding a tree of its fruits, he is compensated by “double handfuls of ripe fruit” (56).

Here we see the stark difference in the island’s treatment to the disrespectful and the respectful.

Golding uses the island’s personification that rejects those who “cry nintelligibly” (56) while cherishing Simon’s gentle nature to magnify the island’s abundant, yet unforgiving natural setting. The island’s nourishing treatment to civilization doesn’t end there, as it continues to prove its comforting nature when Simon is alone by himself. After demonstrations of Simon’s respect towards the island- such as when he places fallen leaves back into their places-, “green sepals drew back a little and the white tips of the flowers rose delicately” (57).

Golding uses this adoration of the island towards Simon’s presence to enhance the original gentleness of the island’s atural setting. Nature is emphasized in this particular part of the novel as peaceful and comforting.

Golding breathes generosity and gentleness into the island’s personality to magnify and augment its natural beauty. However, despite the island is pleasant and rewarding -it is a “good island,’ after all- Golding makes sure to reveal the judgemental and punishing side of the island to the savagery of the other boys. The sentience of the island given by Golding is provoked first by the boys- as soon as they get together, they decide to set a fire.

Initially starting a rescuation signal fire, the boys end up creating a massive inferno that “laid hold on the forest and began to gnaw” (44). The pain that the island goes through is reacted towards by the boys with “shrill, excited cheering” (44). This ecstatic sensation of destruction of nature stimulates the boys’ wild instincts that later evolves into savagery and bloodthirst, that becomes the ultimate key to their self-destruction.

The savagery that is launched from the fire, becomes an uncontrollable state of uneasiness the boys experience in the island. Even Jack, the savage hunter, dmits, “you’re not hunting, but- being hunted. ” (53). Golding uses this state of fear to emphasize that the nature is an intimidating, and powerful force that can not be tamed by man. The natural setting of the island is enhanced through this relationship between savage Jack and the punishing island reminds the reader that nature is a force that is far greater than an individual’s power or ego. The boys’ attempts to conquer the island and destroy it only brought their submission into barbarism and a hard lesson that man will either compromise with nature, or else suffer.

Golding personifies the island in order to establish silent relationships between the inanimate and actual characters. These relationships enable in many ways for the author to enhance both the beauty and intimidation of the island’s natural settings and give depth to the story’s given physical environment. Furthermore, one must also note the intricate ways the island adores civilization while punishing savagery not only enhances the plot setting within, but creates philosophical sophistication and complexity of characters that enhances the novel’s general completion and execution as a literary classic.

Lord of the Flies Essay on Pathetic Fallacy. (2016, Sep 28). Retrieved from http://studymoose.com/lord-of-the-flies-essay-on-pathetic-fallacy-essay 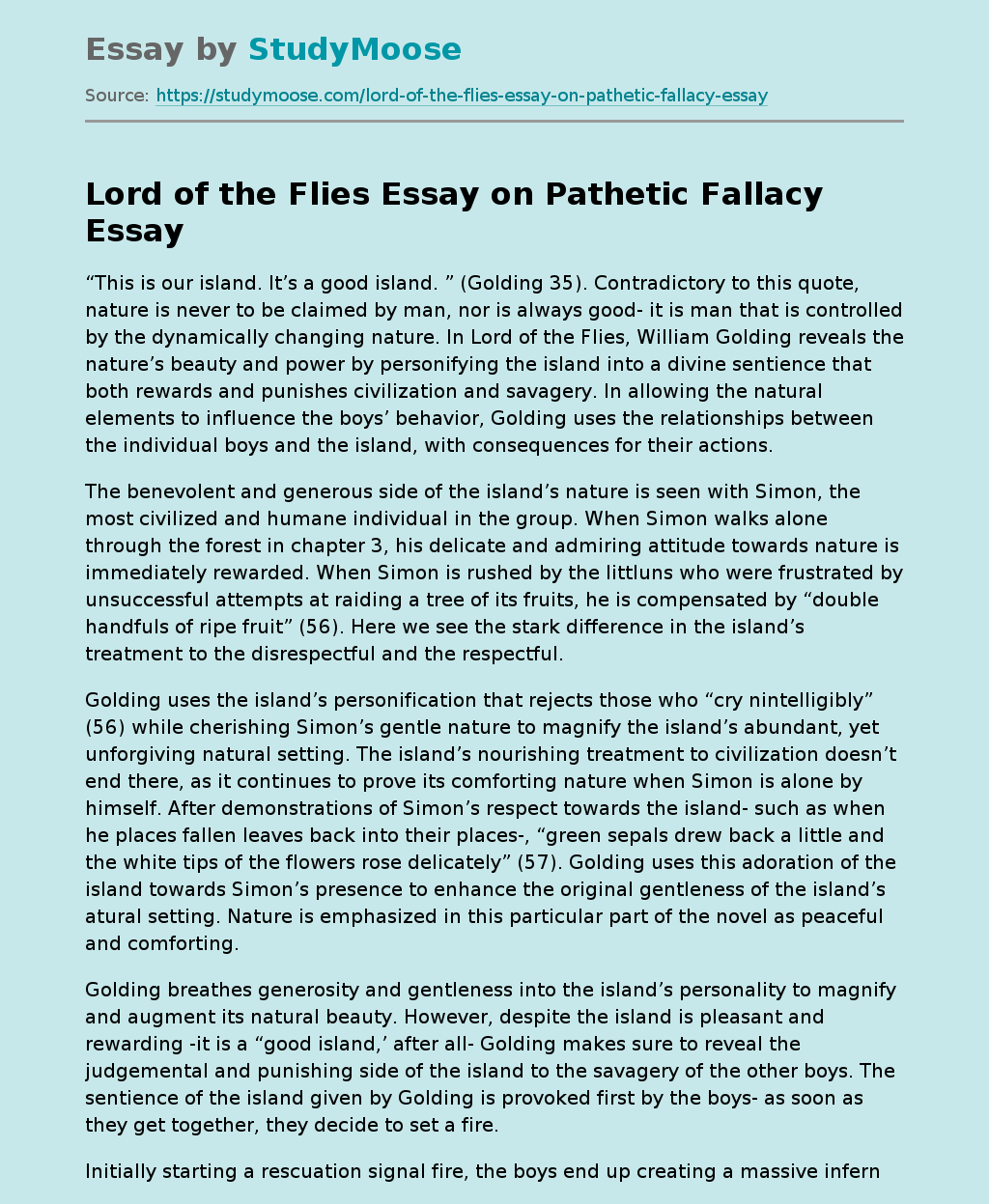