In addition to this the “man is master” theme is echoed when the monster says “how do you sport thus with life” which gives the impression that the monster feels that man is beginning to play God too much and is even creating life just to play with it, and eventually kill it, in the same way that a cat plays with a mouse; the ‘play’ results in the death of the mouse. There was also a national debate raging over the ‘life principle’; are we just a body or is there a soul.

Don't use plagiarized sources. Get your custom essay on
“ Pathetic Fallacy In Frankenstein ”
Get custom paper
NEW! smart matching with writer

There was also a great interest in galvanism, the effect of electricity on muscles and nerves. This was because Lugi Galvani had made a dead frog move by touching it with an electrically charged scalpel. As well as this Giovanni Adini made the dead body of a criminal, Thomas Forster, walk around a room. This had led people to start asking question as to whether it might be possible to bring people back to life.

From the way that Shelley writes it is obvious that she has knowledge of the science of the time.

For instance, when she says, “spark” at the beginning of chapter 5 (4 in the 1818 version) it links to the basis of galvanism, the life-giving fire of the time; electricity. However the word “spark” also has many other connotations linking into Prometheus. For instance, “spark” has connotations of fire, the sacred rite reserved for the gods but stolen by Prometheus, which according to the mixed Greek and Roman myths provides life for humanity.

In addition to this it brings the idea of conflict into the mind (sparking off a conflict).

This again links back to Prometheus, who sparked off a conflict with the Greek/Roman gods. In addition to these the word spark also has the connotation of ideas a theme central to both Prometheus and Frankenstein: Prometheus had the idea about stealing fire and creating mankind while Frankenstein tested his ideas on reincarnation. In addition to this the phrase “lifeless thing” links to the clay that Prometheus used to create humans, and the fact that the monster is referred to as a “thing” suggests even at this early stage that Frankenstein is creating something which isn’t human.

This suggests that it is unmoral for him to be creating the monster. Also the word “lifeless” suggests that the monster, as it never gains a soul, is never truly alive. Likewise the word ‘animate’ links into this idea as ‘animate’ comes from the Latin word anima meaning soul. Animate also comes from the Latin verb animare, which means ‘to give life to’. Both of these roots link directly into Frankenstein. Throughout Frankenstein Mary Shelley uses pathetic fallacy, but this done particularly well in chapter 5.

For instance she uses the words “dismal” and “wet” to describe the morning after the animation of the monster. This reflects the way that Frankenstein is feeling; miserable, depressed, terrified and despondent. She also uses pathetic fallacy in volume 2 chapter 2 when she says ‘The rain poured down … thick mists’. This is a hint at what happens later in the chapter when Frankenstein meets the monster. Shelley uses an important literary technique: the story-within-a-story-within-a-story (Chinese box structure/ cyclical structure/ framing narrative).

Walton tells the whole story of Frankenstein and the monster as related to him by Frankenstein, with the addition of his own meeting with the monster after Frankenstein’s death within the context of his Arctic exploration. Within Frankenstein’s account is the monster’s own tale of events after he fled from Frankenstein: how he watched the De Lacey’s and came to understand human speech, emotion, and history. Each of the stories presents comparisons and contrasts to the others.

For example, Walton’s exploration of the Arctic, like Frankenstein’s creation of the monster, is a scientific endeavour. However, Walton’s expedition fails when his men force him to turn back, whereas Frankenstein does at least succeed in creating the monster, although the results are questionable. As well as setting the various stories in parallel, Shelley also links the character’s dilemmas, and feelings. Walton, for instance, is sympathetic towards Frankenstein but shares the same predicament as the monster. He, too, longs for companionship-he has “no friend…

none to participate [in] my joy… to sustain me in dejection”. This links into The Rime of the Ancient Mariner by Samuel Taylor Coleridge an important literary allusion within Frankenstein. The Ancient Mariner also shares Walton and the Monster’s dilemma. He too has no friends and is doomed to continue to tell his tale forever. Walton is a foil to Frankenstein in many different ways. For instance he is an exceptionally ambitious pioneer, trying desperately to reach the North Pole and allowing nothing to get in the way of his dreams.

However he, like Frankenstein, eventually fails in his ambitions. Also the way that Frankenstein relates his mistakes to Walton is analogous to the Christian confessional, where the sinner recounts their sins to a priest and receives forgiveness for them. It could also be seen as a moral warning to Walton, his sister (to whom the letters are addressed) and then ultimately to the reader. Frankenstein could also be an autobiography, with Mary Shelley being Frankenstein, as it bears many resemblances to her life.

She like Frankenstein watched as many of her family and friends died around her including her children; 2 Clara’s and William, who coincidently has the same name as Frankenstein’s murdered younger brother. As well as this many of the things that he says in his very first letter set the tone of what is to come. For instance within the first 30 words of the book evil is introduced “such evil forebodings”. This sets prepares the reader for what is to come, especially the use of the word “forebodings”; “a sign or warning that something bad is going to happen”1.

Additionally it makes the reader think that his “enterprise” might be unnatural or dangerous, building up a (false) sense of suspense. In addition to this the word “evil” also makes the reader think that the book may have religious messages, as evil is “connected with the Devil or other powerful destructive forces”2 Another important literary allusion in Frankenstein is to John Milton’s epic poem Paradise Lost. The book is introduced with three lines from Milton, and Paradise Lost is one of the three books that the monster reads and on which he founds his beliefs. 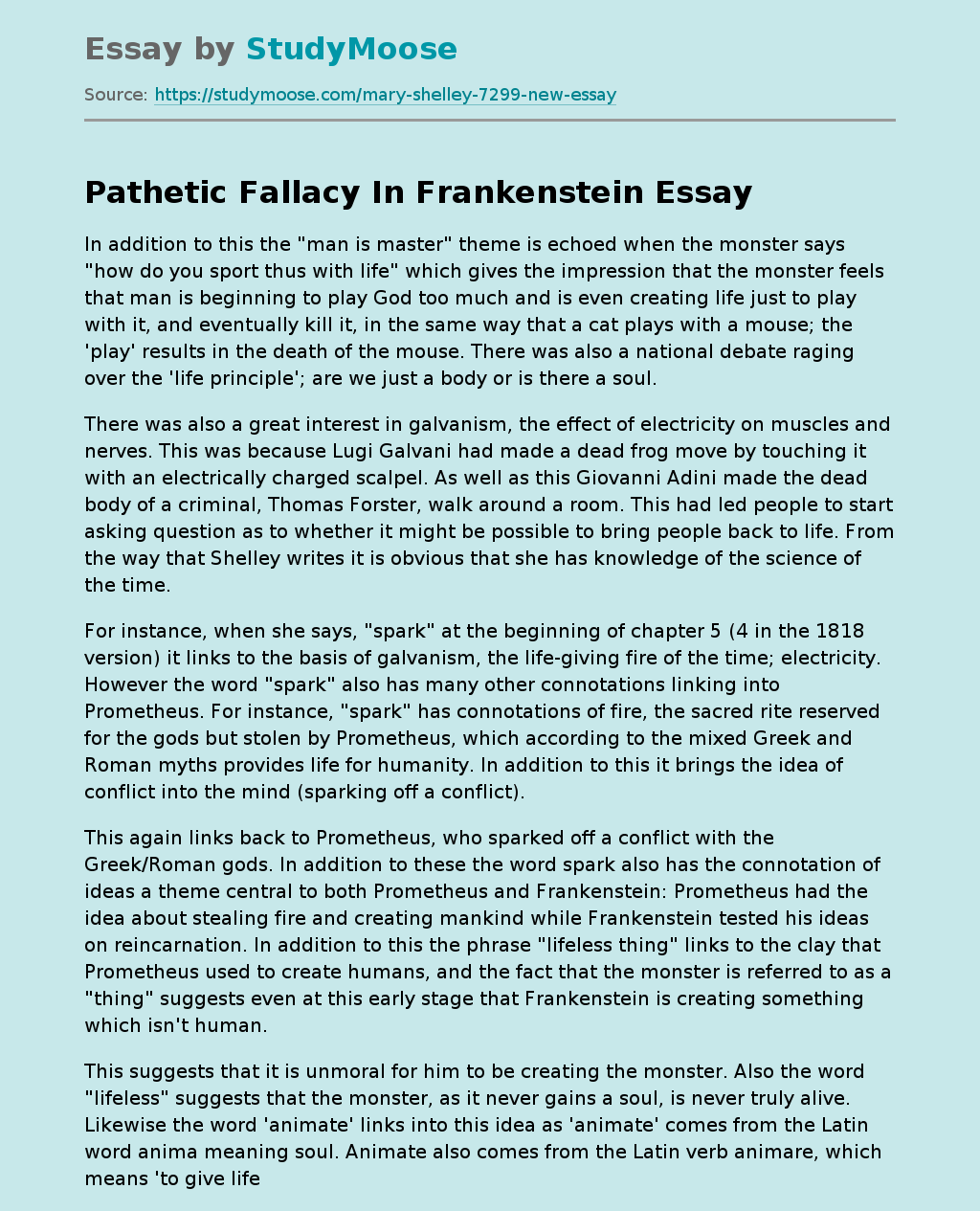