Through a comparative study of Mary Shelley’s novel Frankenstein and Ridley Scott’s film Blade Runner it is possible to gain an understanding of the notion of what constitutes humanity. Despite bearing different contexts, the texts embody parallel values that reveal the fundamentals of human nature. Shelley uses elements of Gothic literature and Romanticism to highlight the value of moderation through Victor Frankenstein’s pursuit of knowledge and the resulting ramifications. Similarly, Scott’s film, set in 2019, reflects concerns of the late 20th Century and the consequences of emerging technological advancements and globalisation.

Turn in your highest-quality paper
Get a qualified writer to help you with
“ Frankenstein and Blade Runner Comparative Study ”
Get high-quality paper
NEW! AI matching with writer

In addition, Scott demonstrates Post Modern views of the nature of our existence in a world of rampant corporatism. Ultimately, both texts are shaped with the values of their respective contexts but each explore the dangers associated with the usurpation of God by man, emphasising the inexorable nature of humanity.

Shelley’s Gothic novel, Frankenstein, explores the complex nature of mankind by considering the consequences of an unrestricted pursuit of science.

A rise in scientific experimentation with Galvanism during Shelley’s time is reflected through the protagonist Victor as he uses it to bestow life. Shelley portrays Victor and the Creature as complex beings, demonstrating both inhuman and human qualities. Despite this, the subsequent rejection by his creator and the De Lacy family drives the Creature to ‘eternal rejection and vengeance of mankind’. Victor’s initial response when meeting the creature, demonstrates his savage, cruel treatment and lack of responsibility towards his creation.

“Devil I exclaimed”, “Do you dare approach me? Begone vile insect!”

The Satanic imagery of ‘devil’, positions the creature as evil and through the rhetorical question and exclamation, we learn of his aggressive and contemptuous feelings towards the creature.

The metaphor of ‘vile insect’ further reflects Victor’s disgust and anguish in creating his being. This reflects Frankenstein’s superiority in comparison to what he sees as an
inferior, inhumane object. In her Gothic novel, Shelley demonstrates to audiences the question of who we are, through the actions of Victor and the Creature and the questions of what constitutes humanity during her time.

Similarly, Scott utilises the film noir genre to depict the dystopian society during LA 2019, whilst reflecting concerns of power and unrestrained knowledge on the world. Scott is influenced by concerns from the 1980’s of capitalist greed, eventually influencing society’s treatment of the environment, reflected through Tyrell’s main objective, “commerce is our goal”. The opening scenes reflect a dystopian world enthralled by technology and consumerism, shown through the neon bright lights. The extreme long shot highlights the blazing fires within the gigantic city representing a dystopian world and a reflection of hell. The contrast of the blazing fire against the dark city portrays the absence of nature of LA in 2019 and a world encapsulated by technological overload. This gloomy image is reinforced with the non-diegetic sound of the aircrafts, providing the responder with an eerie atmosphere. The effects of the rise in scientific advancement are emphasised through Tyrell’s isolation, much like Victor in Frankenstein. Despite differing contexts, both Shelley and Scott portray these notions and reveal their effects on humanity and the world.

Furthermore, Frankenstein is a cautionary tale as it warns of the dangers of attempting to usur[ God, through contrasting images of the Romantics view of the sublime. The depiction of the beauty of the outside world reflects the Romantic concern regarding the preservation of nature in which the Industrial revolution was a precursor for. Victor seeks the natural world to mollify his anguish about the recent deaths of William and Justine. Shelley’s vivid descriptions of the natural landscape convey a Romantic appreciation of the beauty of nature, but they are intertwined with a sense of Gothic terror. The “eternity of such scenes”, the “savage and enduring scenes” and the “wonderful and sublime” feeling of the natural world enables Frankenstein “to forget”. The use of bucolic imagery shows the value that Shelley places in the beauty of the natural world. The fact that nature enables Frankenstein “to forget” his guilt following William’s murder indicates a strong connection between humanity and the natural world.

“While I watched the storm, so beautiful yet terrific…This noble war in the sky elevated my spirits”

Shelley’s use of rich imagery as well as religious imagery in ‘elevated’ provides connotations of beauty and a pristine place. Scientific advancements during the time reflect Shelley’s concerns of the dangers of unrestrained scientific knowledge during her context.

Furthermore, Blade Runner reflects a postmodern questioning of the nature of humanity whilst exploring concerns of capitalism, leading to a diminishing of moral principles. Scott illuminates the dehumanising effects of such progress, foregrounded through Deckard’s “retiring” of the Replicant Zhora. Here, the stylistic placement of the transparent cloak places further emphasis on the violence of her death, with a slow-motion low angle shot conveying her heightened sense of humanity within her last moments. The frantic camera movements before Zhora’s death indicate that she is more than just a replicant, bringing on questions of what constitutes a human, reflecting postmodern views.

Additionally, the depiction of a tear running down Pri’s face whilst she lies on the sidewalk surrounded by blood combined with sultry, non-diegetic sound and that of a heartbeat, reinforces this questioning of humanity. This is juxtaposed with Deckard’s emotionless features and the monotonous drone of the droid, suggesting that our artificial creations can lead to the dehumanisation of mankind, undermining our humanist framework and hence, cautioning us of the dire consequences of unchecked scientific progress. Blade Runner reflects ideals during the late 20th century of who we are, through the comparison of the replicants and humans, and inevitability reflecting the complex nature of humanity.

Despite differing time periods both Mary Shelley’s Frankenstein and Ridley Scott’s Blade Runner, explore similar concepts and values relating to their contexts. Frankenstein reflects Romantic concerns for the rise in technological overload and the effect this has, eventually leading to the
questioning of humanity. Similarly Scott reflects these same ideals through Post Modern concerns of the time. Despite displaying similar concerns, both Scott and Shelley express these values and ideals in relation to their contexts. 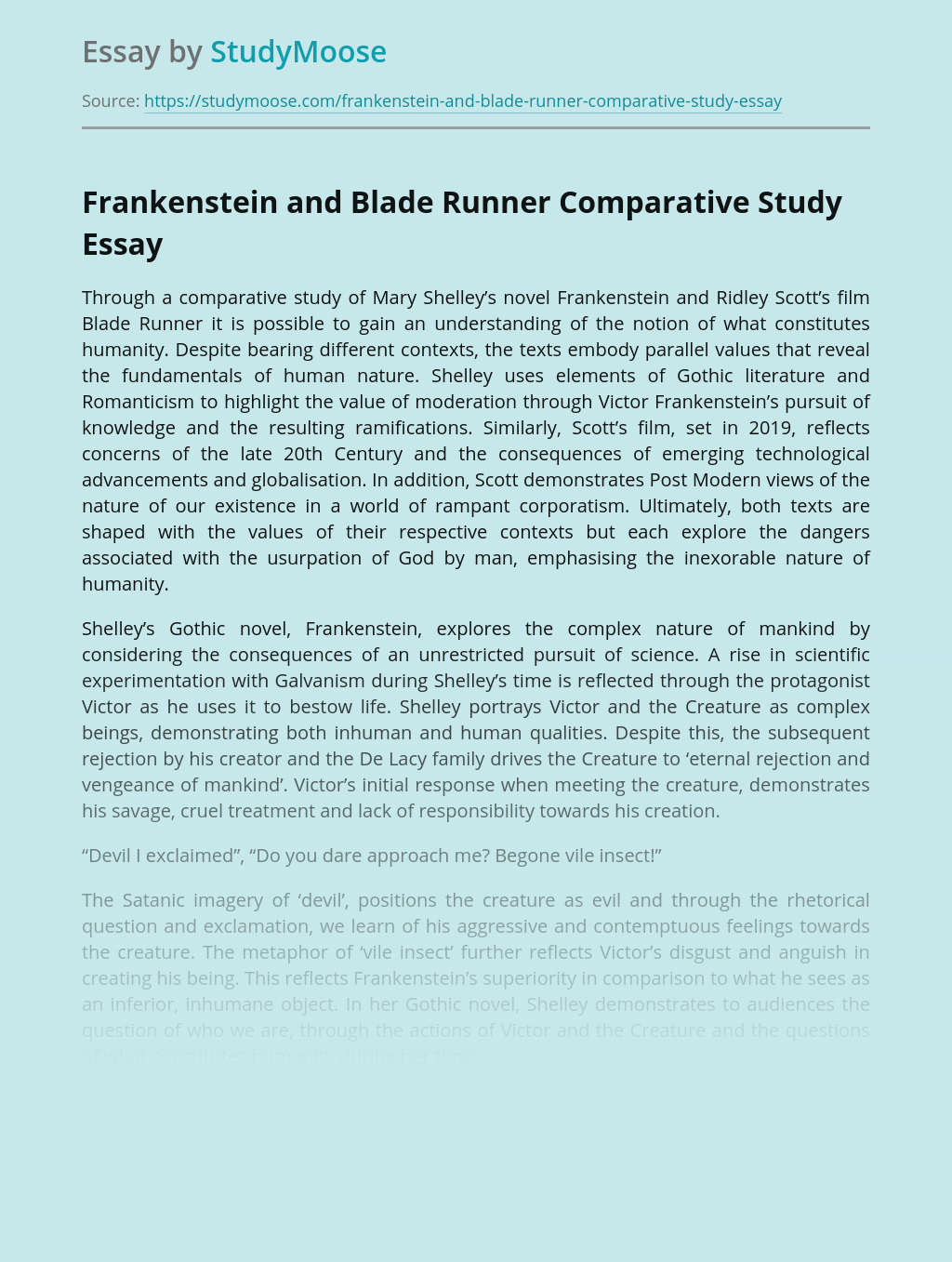 Turn in your highest-quality paper
Get a qualified writer to help you with
“ Frankenstein and Blade Runner Comparative Study ”
Get high-quality paper
Helping students since 2015
Stay Safe, Stay Original