Hindu religion is a vast religion consisting of many gods and goddesses that people worship. People of Hindu religion do not consider only one God as supreme but are devoted to different ones. They believe in good actions which results to good karma. I find it fascinating that the people have a deep belief in reincarnation and rebirth and it is associated with karma. Therefore, good actions results in good karma whereas bad actions results in bad karma. Instead of focusing on materialism that will eventually disappear, they want to focus on the spiritual essence.

Don't use plagiarized sources. Get your custom essay on
“ The Beliefs in Hinduism and Islam and the Similarities and Differences Between the Two Major Religions ”
Get custom paper
NEW! smart matching with writer

It provides a perspective on what is to be valued.

Islam is a religion that worships only one God (monotheism). Islam is not exclusively Arab, this is the seconds largest religion followed by millions throughout the world. Islam was started by Prophet Mohammed. It has 99 names of Allah which signifies Allah as “The God”. In the Islamic religion, Mohammed is the last prophet. Islam begins as a reaction against polytheism and immortality, it was a response to a call from God.

Hinduism maybe an extreme religion because it consists of a variety of rituals, gods and goddesses but it is unique in its own way. Something that I find interesting about Hinduism is that there wasn’t a particular individual who established this religion but it started with Aryans and Dravidians who lived in the north western part of India and moved around which slowly gave rise to a society whereas Islam was founded by Mohammed.

He was the messenger of God who spread teachings of Islam to the people. Islam is very different than Hindusim in the context of worshipping a God because Muslims have devotion to only one supreme God. On the other hand, Hindus have various Gods and Goddesses representing divisions of human states (for example, Goddess of wealth, God of peace, Goddess of education). From what I have studied, Mohammed destroyed multiple idols of God as a reaction against polytheism. . As Islam is an Abrahamic religion, it has its influence from Judaism and Christianity. Just like reincarnation talks about karma, the Bhagvad Gita associates the teachings of Lord Krishna to his devotee Arjuna. It defines the conflict between good over evil. As a reference from Bhagvad Gita, it explains the difference between managing our physical and emotional attachment to the world and following the path of right action. In the first few chapters of the book when the war is about to take place, Arjuna explains how he does not want to fight because he feels like there is no happiness in killing his own men. To this Krishna replies by saying that our physical and emotional attachments are temporary and asks Arjuna to guide himself through his good actions and that he is doing his duty of defeating good over evil. Krishna teaches Arjuna to perform his duties and to set oneself free by following the path of right action. He says detachment from the materialistic world will enable Arjuna to connect to the eternal world. “And those who believe and do righteous deeds and believe in what has been sent down upon Mohammed- and it is the truth from their Lord- He will remove from them their misdeeds and amend their condition. (Qur’an, 47:2)”. Following our religious figures is essential because the verse explains what Allah said to Mohammed- to perform good deeds and be accepting of supreme guidance.

Just as Bhagvad Gita is our sacred text, Qur’an is the holy text for Muslims. Allah was the guiding light to Mohammed, the relationship between Allah and Mohammed was very similar to the relationship between Krishna and Arjuna. Everything that was said in the Qur’an was a response to events that happened during the life of Mohammed. When Mohammed faced problems, Gabrielle came as an angel to communicate to him the words of God and ways to deal with the problem. Both Qur’an and Bhagvad Gita offer similar teachings to individuals that lead them to the path of righteousness.

A contrast between Hinduism and Islam is; Since rebirth is based upon the deeds you perform in this life, you are rewarded based on the level of devotion to your religion according to Hindu. A human being has to live many lives and go through various and experiences in order to reach to the place of connecting with the divine. As a Muslim, being materialistic is not good because when you grow old and die you will not be taking any possessions along with you. You will be taking the good deeds that you do in your life. When Muslims pray, they repeat the same prayer every day. In Islam, when you are incarnated to each level, you move to another (hell or heaven) based on the deeds you have performed in your life. For example, if in your life, you have been a good person then it will be weighed against your bad deeds so you move to heaven. People with good deeds are typically favored by God.

Another example of a contrast is, Muslims worship Allah at the mosque. It is considered as the house of God. Wherever they are, Muslims worship facing Mecca. It is where you create a connection between you and God. Muslims pray five times a day in three different positions and say the verses of Qur’an while bowing down in a sequenced movement. Hindus offer prayers and worship God at temples, usually in the morning. Water, flowers, incense and other offerings are also made to the gods or goddesses.

Bhagvad Gita gives me a perspective on what is to be valued. Like Krisha(God) explains to Arjuna (follower), the world we live in is illusionary, therefore, we must not move according to our desires and actions but know our duties and responsibilities which will bring us to our God. People who find a way to escape the obstacles in life will not find God but people who can face the obstacles and perform duties without being selfish, egoistic and ignore all the desires can manage to attain God. Thus, Krishna tells Arjuna that one should be able to follow the right path of action along with a peaceful mind free of egoism, greediness, desires which will ultimately attain liberation with the Supreme.

The Qur’an has rules for people to follow. If you ignore all the worldly desires, a path leading to God will be clearer. It is basically guidance from Allah to the believers not to indulge in bribery and not to steal. The Qur’an Surahs were interesting in the sense that there is so much depth in what is written in the Surahs. The first Surah is the opening which is read quietly to one’s self at someone’s funeral as a way of giving mercy to the spirit. One of the significant reasons that struck me was that Muslims repeat the same prayer while praying. It says that there is no one else we have to be praying besides Allah and he will guide us to the path.

The Beliefs in Hinduism and Islam and the Similarities and Differences Between the Two Major Religions. (2021, Sep 27). Retrieved from https://studymoose.com/the-beliefs-in-hinduism-and-islam-and-the-similarities-and-differences-between-the-two-major-religions-essay 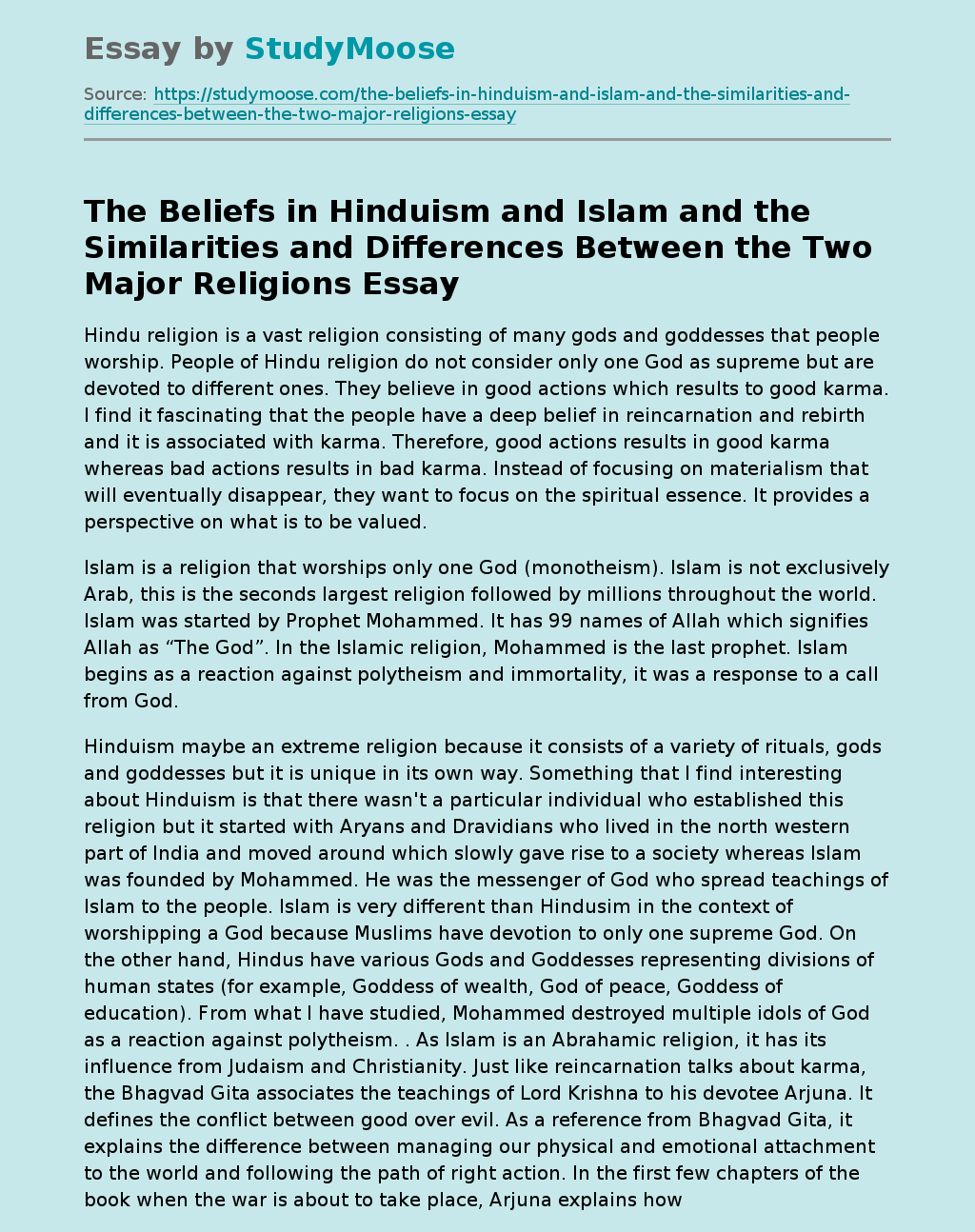