The Differences Between Buddhism and Hinduism

Buddhism and Hinduism: the similarities and differences that define their cultures. Today’s world is a very small place with the internet, cable news networks, and social media at our fingertips. This was not always the case. The origination of Buddhism religion and Hinduism are separated by countries that make-up their differences, but there are similarities which they both share. These two religions defined cultures and societies for centuries. Is it coincidental that two major faiths were founded in the continent of Asia, and in and around the country of India? Perhaps it would be if that part of the world were not as established as lesser continents of the world.

Don't use plagiarized sources. Get your custom essay on
“ The Differences Between Buddhism and Hinduism ”
Get custom paper
NEW! smart matching with writer

India is known for its traditional and steadfast ways. Even today with India being technologically advanced still cultivates ancient values. The mix of the two is a sign of deep routed faith that is woven into their fabric of life. A man named Buddha established Buddhism in what is now Nepal, the northern part of India.

He reached his enlightenment and set out to share his new out look on life. Going back to his past, he learned that two of his mentors, Alara and Uddaka had died. ‘Then he thought of his companions who were austerities’.1 When Buddha found them they decided to not treat him well, Buddha’s enlightenment had such a powerful aurora, the five old companions were overwhelmed and not only greeted him, but also listened carefully agreeing to his every word. Buddha told his five companions of his transition and understanding ‘a new path of life’.

His character, or Dhamma, was not about what happened after you die, or where you soul went. His Dhamma was not related to typical religious activities such as ceremonies and rituals. It was about eliminating suffering during your lifetime.

The duty to keeping your body pure would enable your mind to be pure. ‘The recognition of the existence of suffering, and to show the way to remove suffering, is the foundation and basis of his Dhamma.’ Through three philosophies, the Path of Purity, the Path of Righteousness, and the Path of Virtue, Buddhism believes they would eliminate suffering. The Path of Purity states: ‘Not to injure or kill; Not to steal; Not to speak untruth; Not to indulge in lust, Not to indulge in intoxicating drinks.’ The Path of Righteousness states: ‘To realize the importance of Right Views’. The Path of Virtue consists of ten virtues: 1. ‘Sila is moral temperament’, the conscientiousness of doing wrong. 2. ‘Nekkhama, renunciation of the pleasures of the world.’ 3. ‘Dana, the giving of ones possessions.’ 4. ‘Virya, doing right with all your might whatever you have undertaken to do.’ 5. ‘Khanti, not to meet hatred by hatred.’ 6. ‘Succa is truth. A person must never tell a lie.’ 7. ‘Adhithana is the resolute determination to reach the goal.’ 8. ‘Karuna is loving kindness to human beings.’

9. ‘Maitri is extending fellow feeling to all beings.’ 10. ‘Upekka is detachment as distinguished from indifference.’ The religion of Buddhism teaches that the will of man is in control of his own suffering, and as such, in control of his salvation. In other religions, it is God that is the only way to salvation. Man being obedient to the rules and rituals counts more for eternal happiness in heaven instead of while on earth living with the same serenity you are expecting after death. The very idea which man can be the salvation of himself is the path to enlightenment, or Dhamma is a concept practiced today by millions of people around the world. The faith of Hinduism is much older than Buddhism. It was founded in the part of India known today as the country of Pakistan. Unlike Buddhism, Hinduism is not attributed to a single person. It is said, ‘Since Hinduism has no founder, anyone who practices Dharma can call himself a Hindu’. Hinduism is not a religion, rather a way of life. The teachings, or scriptures are shared through Shruti, communicating through hearing, which is spoken from God. Smriti is by remembering the scriptures. The third is Nyaya, a combination of stories and scriptures.

The Differences Between Buddhism and Hinduism. (2016, Sep 07). Retrieved from https://studymoose.com/the-differences-between-buddhism-and-hinduism-essay 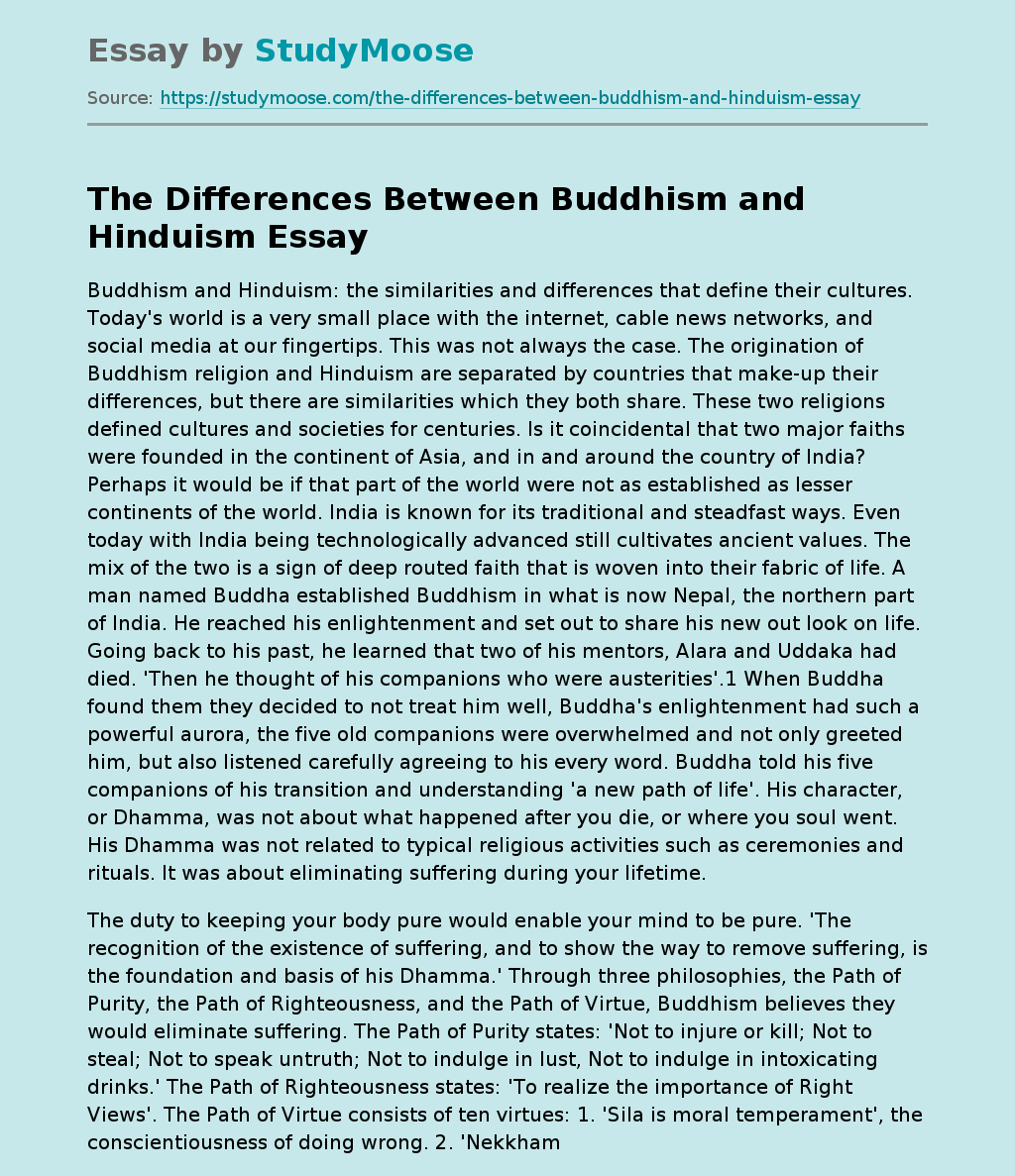